You think that Texas A&M video was bad? Oh, it gets way worse than that. Come along, and be as glad as ever that YouTube wasn't around when you were in college. (If you're in college, sell your computer right now.) Follow @SBNationCFB Follow @JasonKirkSBN

Share All sharing options for: Whoops: The 12 Most Regrettable College Fan Pride Videos

There are ways to do the college sports pride video right.

There's the pinnacle of the genre -- Oklahoma's "Ice Cream Paint Job" spoof -- along with Deion Sanders and his FSU teammates rapping about basically being not Miami*, Joey Harrington in "Return of the Quack" (it's good to build on an existing song, rather than work from scratch), odes to Ole Miss girls (it's good to keep the white people off the mic), the Wake Forest Super Bowl Shuffle (Wake Forest!), the Renaldo Woolridge library, unbearably sexy anthropomorphic citrus porn, these Florida athletes doing neat athlete stuff, and pretty much everything LSU's video people ever put out. Oh, and Ohio State basketball players slaughtering "Party in the USA" into a thin paste. Also, probably anything with animal mascots. These are all good.

* And then there's a whole other category for Miami songs.

However, thanks to Texas A&M, we're not talking about that kind today.

Alligator Army provides constructive criticism to their new conference rivals (that's rivals), SB Nation Houston says you missed the spice beneath all the sugar, our own Bill Hanstock chalks it up to new-kid syndrome, and SI.com's Holly Anderson just wants to free those poor young'uns to do something much more befitting their creative talents.

Again, be glad viral media wasn't around when you were a youth. You've done something even sillier than any of this, but luckily lacked the camera quality and worldwide distribution that kids these days have push-button access to. By "you," I mean me.

The important takeaway here is that the Aggies are by no means alone in the terrible video department. (This might not even be the worst A&M video of the year, depending on your "Aggie Swag" review. I think "Aggie Swag" is fine. And if Horns fans enjoy this one too much, remind them of the memory-holed "Crackas in Austin.") They're not even alone among Lone Star schools with new athletic conference peers.

The "Call Me Maybe" parody video has become some sort of Internet citizenship test by this point. If you haven't done one, you may not actually be online and instead are only reading a series of Word documents from 2008. Even narrowing the field to college athletes and college athletics-friendly institutions, we have this Harvard baseball version (which somehow spawned spinoffs from SMU women's rowing, Texas State baseball, Florida baseball, and so on) and this uncomfortable effort by Texas' (not A&M's!) university bookstore and many more, but, oh, TCU, you gave up like two seconds in:

Before that, there was the "[Color] and [Color]" phase, brought on when everybody realized their teams wear two colors, just like the song. There were many of these, including a Northwestern one by Tom Hanks' kid. Like, every team has one. To find them, you can probably Google any two colors? The winner, however, is this. Start to finish, it's the most University of Virginia document possible:

Hockey players from Massachusetts rapping about playing hockey in Massachusetts better than any other Massachusetts hockey players! Really wish John Cena would enter the ring to this. "My name is [unintelligible]/ the one with the 'stache/ I never get excited/ unless it's over cash?" YOU HEAR THAT PAWWWWL? '86 BOSTON COLLEGE HOCKEY IS ON THE TAKE, WAR DAMN '86 HARVARD HOCKEY.

A crappy-yet-everywhere video or two per fan base is to be expected, but certain schools have really mastered the craft and thus crank out horrifying videos in bulk. Two such universities collide every year in Jacksonville. Blame the brain-vaporizing weather, blame rural upbringings combined with proximity to Atlanta and Miami, blame it on whatever you like, but Florida and Georgia have the game on lock. I mean, this Tebowing one and "this is what Bubba Sparxxx's feces sound like" didn't even make the cut for Florida. Prepare:

The Dawgs counter with the entire output of the Jawga Boyz and the legendary "Party in the UGA" and on and on and on and please God have mercy, but summoned all the powers of the hipster Confederacy to create their defining anthem:

That one has a short person. Speaking of, there's a Nick Saban statue cameo in this Alabama sorority thing. Intermission! This hokey little Appalachian State number seems perfectly fine to me, even though this is really an inappropriate way to market your professors: 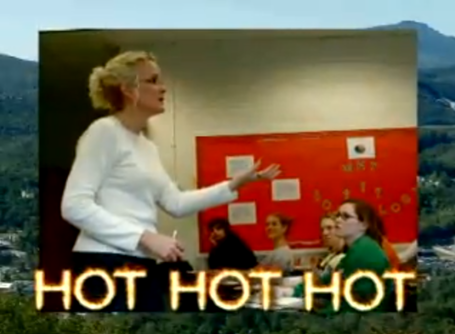 Not all college raps are bad -- this FSU one and this Auburn one are okay, this UCLA one is borderline-but-clever, this Georgia Tech one is too ehhh to pick on, Wyoming (!) has rhymes, "Welcome to Pullman" is cute, MARK DANTONIO DIVE PLAY SWAG ALERT, even Notti Boy himself isn't all that bad, and there are thousands more. But then there's "We Are Mizzou." These guys have high production value and all, but the entire cushy thing strikes the normal ear much like Drake sounds to fake Ghostface. This is softer than newborn baby skulls and requires the infusion of at least one truck-related murder before it's SEC-ready:

Kansas is up next, despite producing some excellent parody of the previous item. Here's a special category of bad college video: the Tutorial. While the BYU fan playbook is more widely derided, it has people singing "Don't Stop Believin'" in it, and that song's finally escaped its 2007-ness enough to be really listenable again. No, the best example of the Tutorial is this by the Jayhawks, in which we learn how to clap along to KU's avant-garde math-rock anthems:

Speaking of basketball, Kentucky would like you to spell C-E-E-E-E-A-A-A-A-A-T-E-E-E-E-S during some sort of Sugarland parking lot Pentecostal-lite freakout:

After watching it this many times, I don't even think K-State's "Power Towel" thing is all that bad. I mean, everybody was making ridiculous videos like this 30 years ago. Remember: if Bill Snyder ever leaves you again, just brandish the Power Towels. He'll sigh, put on his porch slippers, and win you 10 games just so you'll put those things away.

Finally, FreekBass. You win, Notre Dame. You win, and you will never, ever lose. FreekBass cannot be topped in this competition, not on his own merit and not on the contrast between what he is and what Notre Dame is supposed to be. There is no more fittingly imperfect mesh between an audiovisual item and its subject than the following.

Can you do worse? Whatcha got?