If you follow college football at all, you know that the single most important thing about the sport is determining who can cobble together the weirdest/dumbest/most "huh?" uniform of the season. Before the season has even begun, we've already seen a turkey-foot helmet, a jersey with just a big "N" on it and, you know, Maryland. Now the Notre Dame Fighting Irish have thrown their multi-colored helmet into the ring.

Adidas released pictures of the new Notre Dame uniforms that will be worn one time only this year: during the October 6 game at Chicago's Soldier Field against the Miami Hurricanes. 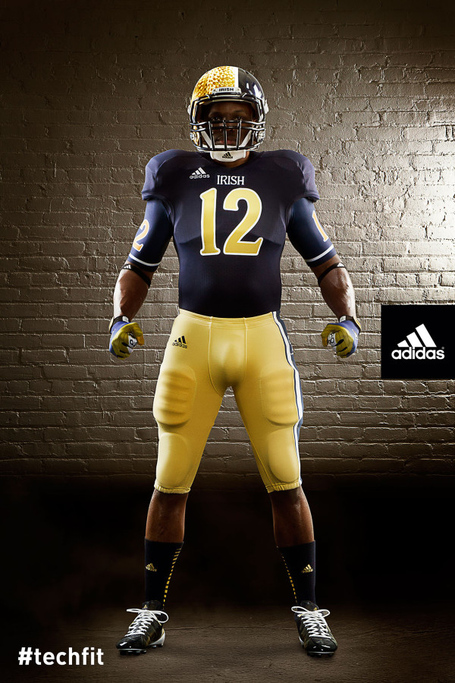 And if you get a better idea about what a uniform looks like via quick cuts of a yelling guy stomping around in a warehouse, here's a video of the fancy gear!

They made sure to get the leprechaun on everything, because if people tune in and don't immediately recognize one of the teams as Notre Dame, they'd get scared and either hide under their tables or start setting things on fire in confusion. The next thing you know, everything's looking like Cormac McCarthy's The Road. And Notre Dame can't risk that. They need that sweet, sweet, conference-free cash.

I think the glove manufacturers of the world finally need to admit that not every logo lends itself to taunt-gloves. Those leprechaun gloves are going to be really confusing. The guy in the video is supposedly doing the taunt correctly and it still doesn't look like the ND logo. It looks like a cross between the New England Patriots "flying Elvis" logo and an issue of Alpha Flight.

Over at One Foot Down, the carving knife is out. Check out their deconstruction of Notre Dame's new uniforms -- from the ground up -- for even more on the changes. SPOILER: That helmet is a problem.