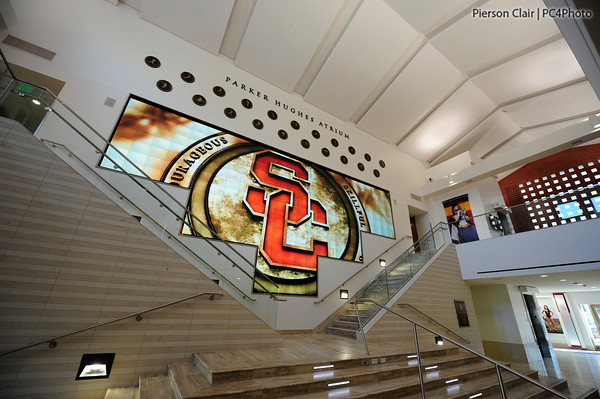 Via the USC RIPSIT Blog

Yes, that's sarcasm. USC already has the top 2013 recruiting class, according to Rivals, and it's just turned one of its very few weaknesses into a massive strength by opening the John McKay Center, a $70 million, 110,000-square-foot athletic facility. Among early reactions from those who got to take a look: our own Scott Enyeart says it trumps even the Seattle Seahawks' practice facility, which is the second-biggest in the NFL.

A slideshow, plus a video tour:

Not sure what reaction there is to offer here beyond, "That is a very expensive building!" and, "I bet that expensive building will encourage even more athletes to play for USC!" These are my reactions to this building.

The building houses meeting rooms, coaches' offices and a locker room for the football program, as well as the Stevens Academic Center (including space for tutoring, counseling, study and computer rooms for student-athletes), a weight room, an athletic training room and a state-of-the-art digital media production facility for all of USC's 21 sports.

The centerpiece of the McKay Center is the two-story video board in the Parker Hughes atrium, which can display six big screen televisions at once as well as promotional videos and graphics.