Whether Bryn Renner ultimately suffered a concussion or not against Wake Forest, Larry Fedora and the Tar Heels coaching staff owed it to him to protect him completely. Follow @SBNationCFB

Midway through the second quarter of the UNC-Wake Forest game on Saturday, Tar Heels quarterback Bryn Renner took a nasty hit above the shoulders, pointed to his helmet, then appeared to lose consciousness for a moment before collapsing in a heap.

Renner might have been fine. I'm not a trainer. I wasn't on the field. But there was doubt, and there was certainly a chance that he wasn't okay -- especially when you take into account the fact that he's had (at least) one other concussion before.

There's been such a focus on player safety and head injuries over the last few years that we forget there are personnel on the field making snap decisions, coaches worrying about a collective over any one individual and players who are prone to telling less than the truth with regards to an injury in the first place.

Time and time again on Saturday, I heard about toughness, about how players shake off injury, about how gritty guys were for coming back out after taking tough hits. This isn't only misguided at times, it's downright dangerous.

Renner said after the game that he wasn't given tests like he was a year ago, when he suffered a mild concussion against N.C. State. The sideline reporter on the ESPN3 broadcast said Renner passed his tests, including reciting the months of the year backward. UNC coach Larry Fedora said after halftime that he thought Renner "was fine."

The team mentioned in the days following that Renner had the wind knocked out of him and was never hit in the head on the play, but Fedora said during the ACC teleconference that Renner went through the tests and was aware. And now Renner has claimed he passed two tests -- one after the play and one after the half.

My question all along remains: why was Renner back out there in the first place?

Wake Forest went on a scoring drive immediately following Renner's hit at the 1-yard line. That gave Tar Heel officials proper time to evaluate the injury (if there was one), and I would assume, especially considering how much UNC focuses on head trauma, the proper tests were run.

But watching the play over and over again -- and seeing how off Renner looked following the injury as compared to how sharp he was playing prior to the play -- made me sick. He was hit hard on his third snap after the hit, fumbling and leading to another Wake Forest score on the ensuing possession. I forgot about the score entirely. The game seemed pointless. 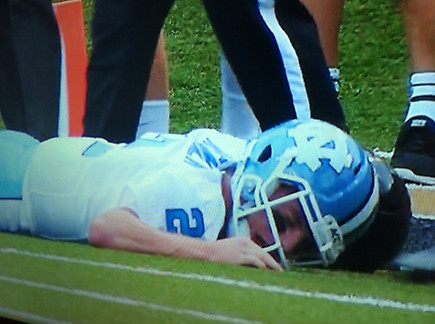 Every play Bryn Renner dropped back to pass, I held my breath. I feared for his safety. Just a couple hours prior, Tulane safety Devon Walker suffered a broken neck and required CPR on the field.

Whether Renner covered for his team, passed the tests, wasn't given the tests, was misdiagnosed, or was fine is irrelevant. When it comes to head trauma, erring on the side of caution isn't just a good idea; it can change someone's life.

It was announced last week that NFL players were more likely to die from neurodegenerative diseases like ALS and Alzheimer's at a rate of almost three times higher than the general population.

What makes head trauma so much tougher to gauge is that it isn't one play, one hit or one moment that makes the difference. It's like chipping away at a giant ice block. The brain takes blows repeatedly, making contact with the turf, sliding for a first down, knocking helmets, snapping the neck back on a sack.

But those hits add up.

Researchers at the University of Buffalo have been studying concussions and immediate and residual effects, and they are also focused on more than just the general concussion tests of balance, cognitive function and sensitivity to light. They are tracing the days and weeks after a concussion to see how a person's symptoms react to athletic activity and stimuli.

"There's no such thing as a minor concussion, and the problem is that once you have one or two, you're more likely to have a third, fourth or a fifth, and then you are at risk for sustaining cumulative and permanent damage over time," John Leddy, associate professor of clinical orthopedics and director of the UB Orthopaedics and Sports Medicine Concussion Clinic, said in an article entitled ‘The Right Call' by John Hill.

"The brain is a unique organ. You only have one, and you need it for almost everything else. Clearly, the animal and human research shows that if somebody goes back before they're fully recovered, they're going to fare much worse and often will have a second, more significant, injury."

Most players don't even notice symptoms other than those moments immediately following a concussion. I had three or four, and the worst one I received, I still have no memory of beyond leaping to make a catch in high school practice and being in the locker room. There's a gap of a few minutes in which I was supposedly conscious and coherent. That last concussion did me in. Everything changed for me after that, and I had to quit football after the season due to severe bouts of insomnia, migraines and what amounted to an entire personality shift.

There's still no direct link between concussions and neurodegenerative diseases; but concussions do alter a person's brain chemistry. Some former players become more aggressive, have memory loss and are more prone to mood disorders, depression or suicidal tendencies.

In a season that doesn't even really count for UNC due to NCAA sanctions, the hits that Renner takes still do. He shouldn't have been out there. And Larry Fedora and the rest of his coaches owed it to him to take that precaution, if not for now, then for his future.