College Football Rootability attempts to sort out the most likable teams in the weekend's given matchups so that the uninvested fan can clearly stake claim on one team or the other in whatever they happen to be watching. It makes little sense and is entirely unscientific, but so is college football. Enjoy. Follow @SBNationCFB

Share All sharing options for: Rootability, Week 3: Cheer For The Ultimate Underdog

Washington State at UNLV. Remember Mike Sanford? You probably don't, but he was the coach at UNLV once. His most notable achievement as head coach came in 2006 when, in front of a relentless camera's eye, he flipped out at the end of a close loss to Iowa State and refused to leave the field.

Sanford disintegrating is just gripping: the running around aimlessly, the moment where it sort of looks like he might just run out of the stadium and away from football entirely, the stumble over his own headset caught on camera, and then telling his entire team to stay on the field despite the game being very over.

It is some sad Christopher Guest sketch made real. You know he got fired at the end of the 2006 season just from watching it, no further information needed, no confirmation required. (He was, but you knew this already from watching the video.) UNLV football is pretty much the same in 2012, but at least they have a good history of disappointing in a cinematic, sweeping fashion.

LEAN: Washington State. Like a Todd Solondz film, just because UNLV does something and does it well does not mean I'm going to subject myself to it. Plus, Mike Leach just hands out free gardening tips all the time.

Cal at Ohio State, noon. Rootability is over the instant you read "team on probation/ineligible/banned in 42 countries for misconduct," because at that instant you must pull for the team playing with nothing on the line but the game itself. The entire Ohio State team is wearing NCAA ankle monitors, but Braxton Miller could wear two and still trot gleefully through the Cal defense given the way the Bears played against Nevada's option attack two weeks ago. Has a quarterback ever played a full season with an ankle monitor on? No, but Marcus Vick came so very close.

LEAN: Ohio State. Because we're suckers for the outlaw, even if that outlaw did something that is like 1/10th as bad as what UNC had going on under Butch Davis.

Wake Forest at Florida State, noon. One other rule of Rootablity -- in direct contradiction with the rule above -- is that the underdog is more rootable than the overcat.* The team that has won the last four of six in this series clearly comes into the game with every advantage but one: the heart of the random viewer, who must by definition pull for the plucky, oft-dominated hard luck longshot.

LEAN: Florida State. One play at a time: that's how you beat a team like Wake Forest.

*Should be a word, dadgummit.

VIrginia Tech at Pitt, noon. Once, on a crowded city street, I saw a car accident happen right in front of my eyes. It was a small but very loud accident, a cabbie T-boning a car coming through a busy, slow intersection late, and one of my friends shot his hands up involuntarily and shouted "YES!" at the top of his lungs. If you are this person, your decision has been made.

LEAN: Virginia Tech, unless you are my friend who cheers random traffic accidents. If you are this person, you pull for Pitt.

Alabama at Arkansas, 3:30 p.m. Maybe it was his smile, dotted with a temporary gold tooth with a...is that a martini glass cutout in the middle, John L. Smith? Why it is, and you'd hardly noticed because he was so suave pouring the Night Train, yelling at the waiter to bring more bread but not charge us for it because classy joints don't make you pay for the bread, and getting your piss all hot telling you about his days coaching Dave Ragone and Drew Stanton. Most girls would go for that type A Nick Saban type, but an old charmer like John L. has his game, too, at least until the second half of the date goes downhill and you're left with the check and...wait, valet, that was my car, and you gave him the keys, and crap, he's probably already driven it back to Weber State, hasn't he? He has.

LEAN: Arkansas. No one said Rootability or John L. Smith had to make sense.

North Carolina at Louisville, 3:30 p.m. North Carolina is at an advantage in so many ways here, since Louisville has our favorite coaching totem ever: The Charlie Strong Top Button, the levee preventing the ladies of the world from being swept away by the flood of Charlie Strong's fully unleashed masculinity. Larry Fedora is no slouch on the other end, since he's a handsome man, and one who sometimes lets his players take short naps during the game. He's for the kids like that.

Virginia at Georgia Tech, 3:30 p.m. An emotional game for current Georgia Tech defensive coordinator and former Virginia coach Al Groh, if Al Groh had human emotions, and was not in fact a sweatshirt that grew a man one day as cover. Paul Johnson doesn't care if you like his team or not, but they are likable for all the obvious reasons: they always go for it on 4th and short and they never change their paleolithic horseshoe crab of an offense.

It's not that you're less likable, UVA. You're just not as weird or cromagnon, and in Rootability the caveman is always holding aces and smiling. (He's smiling because he's just happy, not because he can read the cards. He cannot.)

LEAN: Georgia Tech, not that Paul Johnson cares at all about a single thing you think, ever.

Florida at Tennessee, 6 p.m. Being a Florida fan makes any objectivity in evaluating this game impossible. I will be watching it with a Tennessee fan in the room, though, and this is what is going to unfold in my living room.

LEAN: "Things that can't be unsaid" in a landslide.

USC at Stanford, 7:30 p.m. With two private schools in California going at it, one has to move away from the similarities, and toward the real differences between the schools. Advantages for Stanford: academics, prestige outside of football, and location because it is located in America's Narnia, and Narnia is really just a great place to be. USC's advantages: infinitely better historically at football, heavier on the glamour, Barkley/Lee/Woods at Kiffin's ready, a fantastic band, and cheerleaders in classy-type sweaters.

Oh, we almost forgot one thing for Stanford. 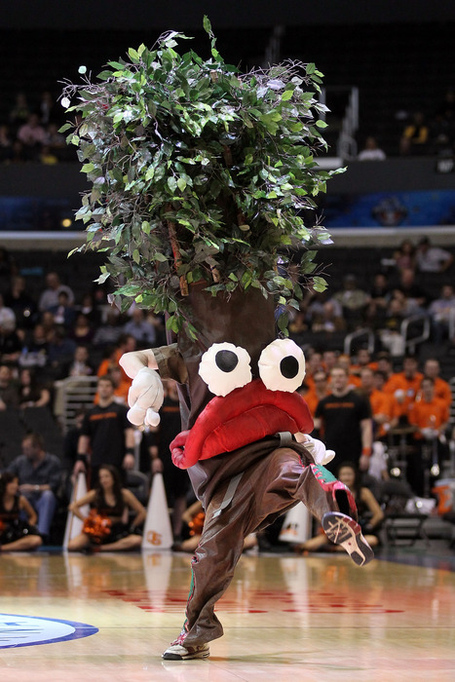 LEAN: It is a deeply personal choice, but Tree always wins Rootability's heart before the contest even begins.

Notre Dame at Michigan State, 8 p.m. Michigan State is the old 1980s Japanese businessman of football teams: at its desk early, hammering away at its work for 14 hours a day, and then unraveling under pressure at the end of the evening and doing something spectacular. Spectacularly bad or spectacularly good is always the question, but the main point is Michigan State is rarely boring at the end, something Mark Dantonio himself knows all too well after calling a fake field goal to beat Notre Dame in 2010, and then suffering a heart attack afterwards. Sparty football: it's an egalitarian kind of stress.

LEAN: Michigan State, just being the salaryman dancing with a tie around his head at the karaoke lounge on select Saturday nights every fall.