The Numerical, Week 1: Pretty Stadiums And Passing Against Air

It is now time to look at the numbers that mattered in Week 1 of the college football season, then turn the page to Week 2.

Share All sharing options for: The Numerical, Week 1: Pretty Stadiums And Passing Against Air

-3. Temple's yardage margin in a 41-10 win over Villanova. They gained 362 and allowed 365. Tough to do while winning by 31 points. But that's what happens when you win the turnover points margin (as defined here) by 13.5 points and finish drives infinitely better.

-1.1. Average length, from the line of scrimmage, of 10 passes from Geno Smith to Tavon Austin in West Virginia's 69-34 win over Marshall. He ended up gaining 53 yards in those 10 targets and took three traditional carries (as opposed to basically long handoffs) for another 66 yards. That's 13 touches, almost all behind the line of scrimmage, for 119 yards. Not bad.

0.8. Yards per touch for Boise State running back D.J. Harper against Michigan State's brutal defense. The sixth-year senior gained just eight yards in 15 carries and caught two of three passes for seven yards. Michigan State is probably going to do that to a lot of running backs this season.

2. Drives in which Murray State gained more than 22 yards against Florida State. The Racers went three-and-out eight times and drove more than 35 yards just once while gaining 156 total yards and getting outscored by a tidy 69-3.

2.1. Average points scored by Arizona in eight regulation trips inside Toledo's 40-yard line in regulation. The Wildcats scored two touchdowns and a field goal but also lost two fumbles and missed two field goals. They almost doubled up the Rockets in total yardage (624 to 358) but were taken to overtime because of an inability to finish. This also almost doomed Minnesota (2.2 points per trip in six trips against UNLV) and did finish off California (3.4 points per trip in seven trips in a loss to Nevada). Always be closing (drives).

3. Different ways in which North Carolina's Giovani Bernard scored a touchdown in a 62-0 win over Elon. He scored one on the ground, one via pass reception, and one via punt return.

3.5. Yards per play gained by Ohio State over their first four drives against Miami (Ohio). It took them a little while to get rolling, but once they did, wow. The Buckeyes cruised to a 56-10 win, gaining 485 yards in their final 71 plays (6.8 per play). On the flipside...

3.8. Yards per play gained by both Tulsa and Texas State after their first four drives. Tulsa built a 16-7 lead and gained 131 yards in four possessions, then got outscored, 31-7, the rest of the way. Texas State, on the other hand, held on against Houston. The Bobcats gained 238 yards in their first 23 plays and sprinted to a 21-0 lead, then held on for a startlingly easy 30-13 win.

4. Fumbles committed by Arkansas in a tougher-than-expected 49-24 win over Jacksonville State. In all, JSU recovered five of the game's seven fumbles and won the turnover points margin by 11.9 to stick around a while, but eventually Tyler Wilson's near perfect passing -- 70 percent completion rate, 12.9 yards per pass attempt -- allowed the Razorbacks to pull away. But they probably shouldn't try that balancing act during conference play. Then again, it worked for Nevada, who fumbled six times against California but recovered seven of the game's nine fumbles in a relatively lucky 31-24 win in the Golden Bears' freshly renovated home stadium. But hey, the stadium looks great, so that's something. 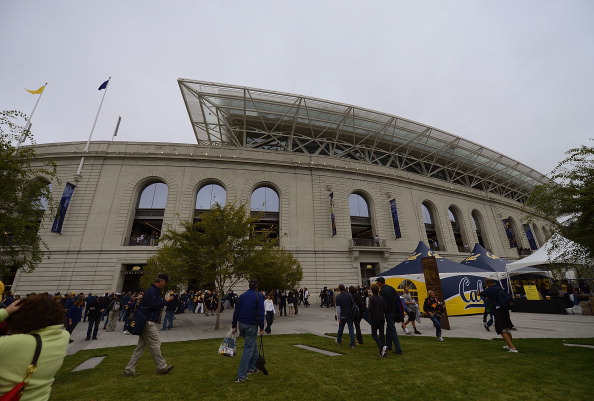 4.3. Yards per pass attempt averaged by Washington State's Jeff Tuel and Kansas' Dayne Crist against BYU and South Dakota State, respectively. Relatively speaking, big things are expected of both senior quarterbacks this year. Tuel is taking over Mike Leach's (typically) high-powered Air Raid attack, while Crist has reunited with his former Notre Dame head coach Charlie Weis in Lawrence. Both looked either inexperienced (Tuel made some dumb mistakes) or simply inaccurate in their first starts of the season. Crist's Jayhawks eventually pulled away from The Other SDSU because of turnovers (plus-12.9 turnover points) and a potentially stellar running game (Tony Pierson and Taylor Cox: 36 carries, 245 yards, three touchdowns); Tuel, on the other hand, needed far more weapons around him to counter what might be a very, very strong BYU defense this year, and Washington State fell hard, 30-6.

5.3. Yards per pass attempt averaged by Washington's Keith Price in a 21-12 win over San Diego State. While "big things" are only expected of Tuel and Crist in a "relatively speaking" universe, big things are expected, period, of Price and his Husky offense. But after two easy opening drives (16 plays, 97 yards), Washington was mostly grounded, averaging just 4.6 yards per play. And while the run game is mostly to blame -- running back Bishop Sankey gained just 66 yards in 22 carries -- the passing game was rather unspectacular. Price completed 15 of 22 passes to Austin Sefarian-Jenkins and Kasen Williams for a decent 157 yards, but his other 10 completions went for just 65 yards in a less-than-explosive attack.

9. Combined field goal attempts by Auburn and Clemson in Clemson's 26-19 win. A game that featured 902 yards and a 6.0 per play average also featured a lot of drives coming up short of the end zone, at least until the end.

10.9. Colorado State's sack rate on poor Colorado starting quarterback Jordan Webb. Throw the ball, Jordan. At Kansas last year, Webb was sacked on 9.9 percent of his pass attempts, a sack rate two to three times higher than it should be for an offense to be successful. He was sacked even more frequently against his new in-state rival, going down five times in 46 pass attempts. CSU's Cory James did a good portion on his own with three sacks.

14. Different Oregon receivers who caught a pass in the Ducks' 57-34 disposal of Arkansas State.

14.1. Devin Gardner's catch rate (one catch in seven targets) in Michigan's disappointing 41-14 whipping at the hands of Alabama. Playing receiver for the first time, Gardner was matched up far too often with Tide corner Dee Milliner. It didn't work out very well.

14.5. Yards per touch averaged by Miami freshman Duke Johnson in a surprisingly exciting 41-32 win over Boston College. Johnson carried seven times for 135 yards and two touchdowns and caught three of three passes for 10 yards. Not a bad way to make an entrance.

15. Plays run in the first half by Northern Iowa against Wisconsin. Wisconsin's propensity for a slow pace backfired a bit -- when you hold a per-play advantage like the Badgers probably expected to against the FCS powerhouse, you should probably be running as many plays as possible; Wisconsin scored on four of its first five drives and held UNI to 2.7 yards per play in its first 21 plays. But they held only a 19-0 lead late in the third quarter when the UNI offense exploded for 250 yards in its final four drives and cut its deficit to 26-21. UNI actually got the ball with a chance to take the lead with five minutes remaining but stalled out near midfield.

17.5. Illinois' turnover points margin in a 24-7 win over Western Michigan. Other teams had higher margins -- Missouri was plus-25.5 versus Southeastern Louisiana, Mississippi State was plus-21.4 versus Jackson State and UCF was plus-20.1 versus Akron -- but this margin exceeded Illinois' actual margin of victory, as did Northwestern's against Syracuse (plus-15.7 in a one-point win), Washington's against San Diego State (plus-14.1 in a nine-point win) and Ohio's against Penn State (plus-13.9 in a 10-point win). And, of course, turnovers allowed Wake Forest (plus-9.2 turnover points margin) to stave off Liberty's upset bid by three points. Liberty outgained the Demon Deacons by a whopping 70 yards, but mistakes doomed them. (Meanwhile, Youngstown State outgained Pitt by 12 yards and won the turnover points margin by 10.9. That's how you close on an upset.)

20. Snaps taken by Oklahoma State's starting quarterback Wes Lunt in the Cowboys' pointless 84-0 win over Savannah State. For 75 percent of the game, OSU's second- (or lower) string was playing.

30. Points scored by Duke in the second quarter of a 46-26 win over Florida International. FIU outgained Duke, 513 to 420, but the Blue Devils utilized a perfect 15 minutes to build a lead they wouldn't relinquish. They scored a touchdown to start the quarter, forced a punt, then scored again. After an exchange of punts, Duke scored, recovered a fumble, kicked a field goal, then ended the first half by returning a blocked field goal attempt for a touchdown.

46. Minutes that it took Kansas State to build a double-digit lead on Missouri State. The score was just 16-9 heading into the fourth quarter, but five late touchdowns turned a stomach-churner into a perceived laugher. Bill Snyder is just trolling my numbers at this point. "We're going to look as bad as humanly possible and still go 10-2. Deal with it."

51. Length of the Sean Ianno field goal that carried UTSA to a 33-31 win over South Alabama in each team's first FBS contest. Ianno had a 26-yard field goal attempt blocked at the end of regulation in last year's UTSA-USA game, one which South Alabama eventually won in overtime. Revenge is sweet.

66. Passes attempted by Syracuse's Ryan Nassib in a 42-41 loss to Northwestern.

100. Oklahoma State quarterback Wes Lunt's completion percentage after one career start. Yes, it almost came against air (Savannah State), but Lunt went 11-for-11, then exited. It made the 18-for-22 performance by Oregon's redshirt freshman Marcus Mariota look pedestrian by comparison ... at least until you take opponent into account.

114. Yards gained by Vanderbilt in seven plays (74 in one play) over two second-quarter scoring drives during a 17-13 loss to South Carolina. The Commodores gained just 162 yards in 52 plays the rest of the game.

121. Net yards gained in 27 pass attempts by Stanford's Josh Nunes in a far-too-tight 20-17 win over San Jose State. Nunes completed 16 of 26 passes for just 125 yards and was sacked once. Luckily turnovers (plus-9.9 turnover points margin) and a stellar defensive effort prevented a devastating upset.

203. Net yards gained in 39 pass attempts by Oklahoma's Landry Jones in the Sooners' 24-7 win over UTEP. That is a terribly pedestrian 5.2 yards per attempt. Jones completed six of nine passes to Kenny Stills for 121 yards and a touchdown but completed just 15 of 27 for 101 yards to everybody else. Plus, he was sacked three times for 19 yards. Against UTEP.

223. Yards gained in 28 touches by Indiana State running back Shakir Bell against Indiana in a 24-17 loss. Indiana allowed 6.0 yards per play to ISU, mostly because of the ground game. Luckily there aren't any good ground games in the Big Ten, huh? Wait, what's that?

229. Seconds it took Missouri to score four touchdowns (two on offense, two on defense) in the first quarter of a 62-10 win over Southeastern Louisiana.

284. Yards gained in 30 touches by Texas running backs Joe Bergeron, Malcolm Brown and D.J. Monroe in the Longhorns' 37-17 win over Wyoming. The three gained 251 yards in 34 carries and caught four of six passes for 33 yards.