With its return this week, the Rootability Index attempts to help the non-invested college football fan lean one way or another in this week's slate of games using the same logic the random fan uses: that is, none at all. Follow @SBNationCFB

Utah at Utah State, 8:00 p.m (all times ET). It's a family picnic: Utah State head coach Gary Andersen and Utah's Kyle Whittingham worked together on Urban Meyer's staff at Utah and together on Whittingham's staff until 2009, when Andersen accepted the Utah State job. Because it is Utah, there will be sunny weather, Jell-O, and comparisons of uniquely named children, with everyone agreeing the Mendenhalls still beat anyone present at the picnic in that department.

Then, like most family picnics, there will be a fistfight, and everyone will go home mad. If you like the older brother's calm confidence and steady, fight-finishing headlock, you're in luck: Utah is that older brother, and all too happy to choke out a game little brother in front of all their horrified children.*

* If you did not have fights at family picnics growing up, you missed out on so many invaluable lessons. The most important one: croquet mallets are useless, but the balls they hit are definitely not, in a combat situation.

Lean: Utah. Underdogs are nice, but if it's a family picnic with the Utes, Steve Smith might be there, and he punches people out of the NFL.

Auburn at Mississippi State, noon. Dan Mullen has only beaten one SEC West team in his three years plus at Mississippi State. You will hear this fact several hundred times during the broadcast Saturday, and might be convinced to root for Mississippi State if you like desperate men yearning to prove things. (If you do, and you are a woman, your life must be utterly miserable and filled with investment bankers fun!)

He's not alone in that, though: Gene Chizik's tenure at Auburn is already being referred to by "with Cam Newton" and "without" phases. Auburn also bled out 320 yards of rushing to Clemson last week despite the presence of new defensive coordinator Uncle Rico and a steady debut at starting QB from Kiehl Frazier. In the life cycle of a team, they are still somewhere between "stumbling toddler" and "angry adolescent," and though talented are going to need a full year to congeal into something resembling a coherent squad.

Since both teams have their own brands of desperation, so we'll rely on the traditional tiebreaker of using something that annoys us. K-i-e-h-l is the stupidest possible way to spell "Kyle" besides just using a symbol, or perhaps saying "No, it looks like 'Steve,' but it's pronounced 'Kyle.'"

Lean: Mississippi State. Cowbells it is, then. If and when Mississippi State creates the combo vuvuzela/cowbell, we will have college football's most irritating environment not involving the song "Rocky Top." Murder rates in the Starkville era will spike immediately.

Maryland at Temple, noon. Maryland is only traveling with 60-odd players to Temple this week because Randy Edsall has no football players. Randy Edsall has not heard from anyone at his high school reunion because he has never gone, and has forgotten everyone's name he ever knew. Fine. You want the truth? Maybe Randy Edsall made some mistakes. Maybe his name isn't even Randy Edsall. Maybe WitSec DID give him the job of football coach at a little out of the way program at UConn, and then he got famous, and now this is all out of hand and he needs to be coach of a small program where the cartels can't see his face in the paper every day.

You'll never understand the pain Randy "Edsall" feels, especially for that really bad thing in Juarez he can't talk about. But he's gonna make it right. Right after he loses to Temple to stay alive, and remain more anonymous than he ever wanted to be.

Lean: Temple. Maryland football will make you said, and Temple has a great rushing attack and the checkered pant-stripes to go with it. Did you know Maryland fans are calling Randy Edsall "Rangoon?" 2012 is already the best year ever.

Florida at Texas A&M, 3:30 p.m. A deeply personal choice. Do you attend church regularly? Do you believe men should wear pants, both because of common decency and because you may be called upon to ride an animal or do manual labor at any point in an average day? Are you a farmer, and do you like to fight, preferably with other farmers? Do you believe in an America strong and true, unified behind hard work, family, faith, and a respectable bed time between 9 and 11 p.m. Central?

If so, you must root for Texas A&M.

Now, if you woke up at 11, and aren't even sure if you're in America, much less believe in it? But just know that you need aspirin, an attorney and to find your passport with a quickness even if you find out it's Miami you're stuck in? Are you bleeding? You're probably bleeding, and undoubtedly sweating because the place you are is humid, hot and filled with bad people making worse decisions.

Your choice is made, Florida fan. It's in your DNA, just like that virus you picked up in the Bahamas or wherever you were that one time you cannot remember at all.*

*Author is a Florida fan, and is writing this from the protective custody of the Cuban Coast Guard's offices in Miami.

Lean: Florida. Well, um, we're not bleeding. Not badly, at least. (No idea how it happened.)

Western Kentucky at Alabama, 3:30 p.m. Western's already selling itself here in so many ways: the obvious underdog, the terrifying but compelling mascot, the quirky name (toppers of hills!), the charming head coach Willie Taggart and his team's willingness to walk into Bryant-Denny Stadium and take a beating like men. But then, this happened, and your heart was left with no decisions to make:

They're losing this game, and most likely losing badly and with extreme prejudice. But like their mascot, we will look, and watch them take their pummeling with a respect (and terror, because with Big Red it's always about terror.) That is your leg in Jesse Williams' hand, Big Red. Let him have it, and maybe he will lose interest and walk away without doing further damage.

Lean: Western Kentucky. No one wants to live forever, especially you if you like poking Nick Saban in the eye with a sharp stick.

South Florida at Nevada, 3:30 p.m. The elderly will appreciate B.J. Daniels' attempt at an advanced age to become an NFL Draft pick. Otherwise, all other people of good taste and sound judgement will pull for Nevada and Chris Ault, the college Hall of Famer who invented the pistol formation and then turned it loose on an unsuspecting college football world, but mostly the Cal Golden Bears. Bad things happen in Reno: it's a rule that applies to everything in life, and football is no different. Isn't that right, Boise? (Also, Nevada QB Cody Fajardo is far too entertaining to pull against here, or ever.)

Lean: Nevada. Skip Holtz, these slots are tight, and the blackjack table will be no kinder.

Purdue at Notre Dame, 3:30 p.m. We use the truly important things to decide rootability. For instance: after taking no snaps whatsoever last week, do you trust Caleb TerBush on the road in his first 2012 start for Purdue against an active ND defense fresh from a good performance against the trixy Navy triple option? And more importantly, can you trust someone with such a ridiculously spelled name, aka invoking the "The Kiehl Frazier Rule?" It would be arbitrary to do that, and deeply unfair to a talented football player and his improving team.

Lean: Notre Dame. No one said life, or rootability or being a Purdue football fan had to be fair. (They already know it isn't.)

Nebraska at UCLA, 7:30 p.m. A weird week of games deserves some truly strange outcomes, and nothing would be weirder than both of these teams blowing through the over and scoring truckloads of aberrant points. This is of course what they will do for both good and bad reasons, so you just have to choose between mutant strains of either team: a Nebraska team all too happy to pass the ball with (gasp!) the astonishingly effective Taylor Martinez, or a UCLA team with a powerful rushing attack spearheaded by running back Johnathan Franklin.

It feels strange to pull for UCLA here, but if you don't do something that scares the hell out of you every day, you're not really living. Eleanor Roosevelt said that once, and that's why she once stabbed a man in a craps game in the naval yards at Bethesda once cold night in 1938. To feel alive, dammit.

Lean: UCLA. For Eleanor, and Pappy Red Smith, the gambler she killed that night.

Georgia at Mizzou, 7:45 p.m. Further weirdness: the phrase "old man football" applied to UGA by Mizzou DT Sheldon Richardson. UGA's old man football only in the sense of Mark Richt being the old man of the SEC, and in UGA players' preference for driving scooters around campus. They're full-sized adult scooters, mind you, but if UGA wins big this will probably spark a new fad of UGA players honoring "old man football" by driving Rascals around campus and popping wheelies like Spike Jonze in the Jackass movie. I so badly want to see if it is possible to get arrested on one, and for this reason alone am siding with Georgia here (in what is otherwise a fascinating fitness test for Mizzou and a great road trial for UGA.) 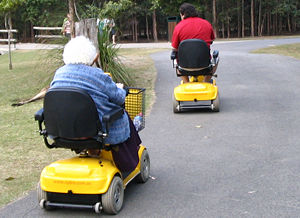 Lean: Old Man Football. Imagine if it were a 330-pound offensive lineman, it makes the visual so much better.

Illinois at Arizona State, 10:30 p.m. The Bat Country Game Of The Week this week--given to the most chaos-potential-heavy game starting after 10 o'clock and happening somewhere in the vast wilds of the American West--goes to Illinois' visit to Tempe. Illinois' defense is rife with talent, ASU's offense is firing on all cylinders against inferior competition, and neither coach avoids fourth down calls, so you know what this is already: the late-night desert refinery explosion you've been waiting for as two teams without clear identities sort out their issues before your bloodshot but transfixed eyes.

Lean: Illinois. If you love something you should set it free, and if you're an Arizona State fan you should just stick to being in "like" with Todd Graham, because there is not a leash made in the world to keep that dog on the sidewalk.