It's time for Minnesota defensive tackle Ra'Shede Hageman to shine

No player stands to rise or fall more this week than Minnesota defensive tackle Ra'Shede Hageman. Against Wisconsin (3:30 p.m., ESPN), Hageman will have his toughest test of the season. As they always do, Wisconsin features a powerful NFL-size offensive line.

Look for Hageman to line up between left guard Ryan Groy and center Dan Voltz. How he does against the physical blockers will go a long way in determining his draft stock. Hageman's game is based around quickness and splitting gaps. In that regard, he's like a taller version of Gerald McCoy of the Tampa Bay Buccaneers. He's not overly powerful at the point of attack and may get pushed around at times. 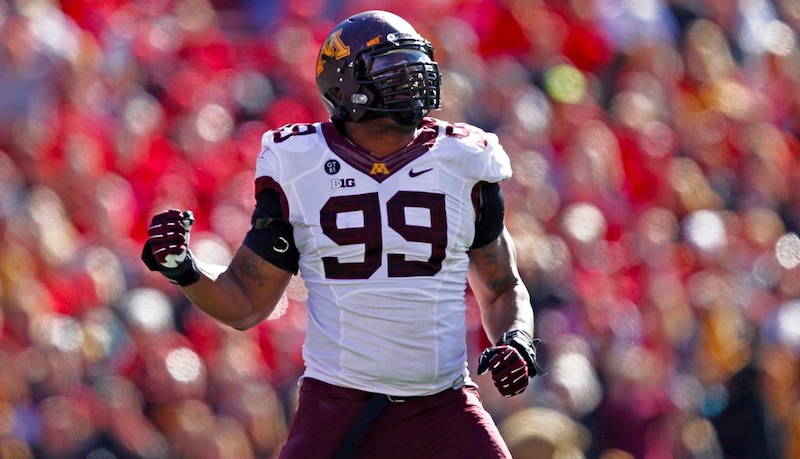 Don't miss reading about the improbable path that took Ra’Shede Hageman from foster child to a top NFL prospect.

If Hageman can be contained, look for Wisconsin's running back tandem of Melvin Gordon and James White to have big games. Both players are well over 1,000 yards rushing on the season and combined for 351 last week against Indiana. Gordon, a redshirt sophomore, is the better player of the two. His speed and vision are very good, and he has size at six-foot and 203 pounds. White isn't as big, but he runs strong and has some shiftiness to his game.

If Wisconsin tries to pass the ball, watch for Gophers cornerback Brock Vereen. He's spent time starting at corner and safety and has the size some NFL teams will love. When Minnesota has the ball, Wisconsin linebacker Chris Borland is the player to follow.

Below are more NFL Draft storylines to follow today. Look for a separate Baylor/Texas Tech preview from Matthew Fairburn (spoiler alert: expect points in that one).

Teams will wonder what to do with Northwestern quarterback Kain Colter. They know the Senior Bowl invite isn't a quarterback. But how well will he project to wide receiver going forward? In space, Kolter is elusive and could challenge Michigan State linebackers Max Bullough and Denicos Allen if he gets into the open field.

This game features two distinctly different quarterback prospects who can still go a long way to prove themselves. LSU's Zach Mettenberger had a rough stretch for a couple weeks, but played decently in a loss to Alabama. He's a classic pocket passer. The teams that have him rated highly may not have Texas A&M's Johnny Manziel so high, and vice versa. While Mettenberger tends to need a clean pocket, Manziel seems to thrive when the play breaks down and he can get out on the move. Teams will want to see a middle ground between the two – Mettenber being able to move and Manziel being able to step into the pocket and deliver with his feet planted.

More to watch: There is a lot of offensive line talent in this game. Texas A&M features tackles Jake Matthews and Cedric Ogbuehi. Arguably the best offensive tackle tandem in the nation, they're both good athletes  with Matthews being much further along in his technique. LSU's best lineman is offensive tackle La'el Collins. He could play guard or tackle at the next level. LSU doesn't have a top-level cornerback who is draft eligible. There is no Patrick Peterson or Morris Claiborne, so A&M wide receiver Mike Evans could be in for yet another big game.

It's been a month since Oregon quarterback Marcus Mariota has thrown for more than 300 yards. While he hasn't necessarily played bad, he hasn't been playing quite as well as he had earlier in the season. Mariota has the skill set to be a franchise quarterback, but he needs to show consistency from the beginning of the game to the end.

More to watch: He may not have the size of a Seattle Seahawks cornerback, but Oregon's Ifo Ekpre-Olomu can get physical like one. He's especially strong against the run. He's one of the few players that can keep up with Arizona's Ka'Deem Carey in the open field. Carey is a speedster who occasionally likes to lower his shoulder and lay down a hit. It would be nice if Oregon's De'Anthony Thomas shared that same mind sight. As it is, Thomas is a speed player and little else. Good thing the speed is top-notch.

One of the better one-on-one matchups of the day is Arizona State defensive tackle Will Sutton against UCLA guard Xavier Su'a-Filo. Not many guards can match Sutton's athleticism and quickness, but Su'a-Filo is more than capable. Both players could use a big game to keep up with other players at their positions.

More to watch: UCLA defensive end Cassius Marsh doesn't get a lot of publicity because he plays with superstar Anthony Barr. But Marsh is a sneaky good player who is sound against the run and the pass. He's the kind of dependable player who should latch on to a roster and improve as a pro. Barr has had a quiet couple of games, but he should still be considered a top 10 pick. There aren't a lot of pass rushers with his kind of speed and athleticism. It would be nice to see Barr drop in coverage at times, especially against Sun Devils tight end Chris Coyle.

• RG3 and why we can't have nice things