Kansas City has solved its biggest problem with two months left to go before the draft. Now what?

Share All sharing options for: 2013 NFL Draft: What do the Chiefs do with the top pick?

The Kansas City Chiefs surprised some people on Wednesday when they traded a 2013 second-round pick and a conditional 2014 third-round pick to the San Francisco 49ers in exchange for benched quarterback Alex Smith. While the price might seem steep to some people, it's worth noting a couple of important items:

He is younger than Brandon Weeden and, even if that was a bad pick and it was the Cleveland Browns, Weeden was the 22nd overall pick last season. I do not think it is that unreasonable for the Chiefs to trade those two picks away for a starting NFL quarterback who could feasibly be a long-term solution at the position. When Steve Young was 30, he made 10 starts for the 49ers and completed 64.5 percent of his passes for 2,517 yards, 17 TD, 8 INT, and it wasn't until after that before Young was able to start a Hall of Fame career.

We also know that no quarterback prospect in this particular draft seemed to fit all that well with Kansas City. The consensus top prospect at the position, Geno Smith, comes with more question marks than your average "top overall" pick. In general, the top of this draft is particularly "whelming" for many onlookers and there seem to be better years to have a top 10 pick. Especially if you want a quarterback. 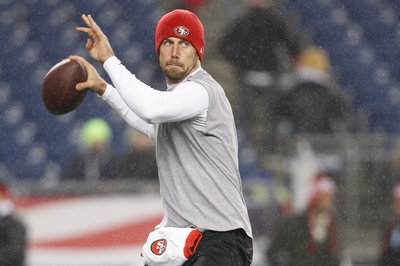 That left many to wonder if teams like the Chiefs, Jaguars and Raiders would wait until the top of the second round to see which of the quarterbacks were left. Rather than wait until April, the Chiefs felt that Smith was a far better bet than Tyler Wilson, Ryan Nassib, Matt Barkley, or anybody else. Frankly, in this NFL, teams are looking for quarterbacks that can come in right away and contribute. Geno Smith might be a great prospect for two to three years down the line, but has not popped off in pre-draft drills and study in the way that would make a team like Kansas City think he could help get them back to the playoffs in 2013 -- and you should believe that the Chiefs are a playoff contender next year. They aren't "one player away" but, with Smith taking over at quarterback, they are one less important player away.

Jamaal Charles, Derrick Johnson, Eric Berry, Tamba Hali and punter Dustin Colquitt all went to the Pro Bowl this past season. Justin Houston recorded 10 sacks, Brandon Flowers returned from injury, and Dontari Poe was just a rookie after being the Chiefs top pick in 2012. If they re-sign tackle Branden Albert and receiver Dwayne Bowe, it's two fewer positions that Kansas City needs to worry about. Which then becomes the issue at hand.

Now that the Chiefs have addressed their most pressing need, and if the draft doesn't necessarily scream to fill their other needs with this class, then what are they to do with the No. 1 pick? What are the Chiefs' top priorities and needs now, what does Andy Reid have a penchant for, and who are the best available players that could fill those needs?

The first thing I would gravitate toward for the Chiefs this year would be help at wide receiver. Not only do they still have a need to add playmakers for Smith, but Bowe is still technically a free agent. Are they going to give him the franchise tag after a season in which they can't be 100-percent sure that his lack of production was entirely the fault of Cassel and Quinn? Is he still worth the average salary of the top five receivers or a long-term contract? Bowe led the team with 59 catches for 801 yards and was followed by Tony Moeaki (33 for 453 yards) and Dexter McCluster (52 for 452 yards). Former first-round pick Jonathan Baldwin played in 15 games and had just 20 catches for 325 yards.

It seems that the Chiefs are indeed "stuck" with the No. 1 pick.

There is a good chance that with a better quarterback and a new coaching staff, all of these players could improve in 2013, but it is still not a position that the Chiefs should ignore. Especially if Bowe is left to walk or traded away after being given a franchise tag. Either way, Kansas City might still have to address this position in free agency, because not only is there not an elite receiver in this class that would be considered "worthy" of the top pick, but the Chiefs just traded away their second-round pick to acquire Smith. If this were next season, maybe the Chiefs could trade down a couple of spots and draft Marqise Lee out of USC, but as of now the best receivers in the class (Cordarrelle Patterson, Tavon Austin, etc.) aren't expected to go in the top 10.

That's where Reid would be looking to trade down, but that's another issue. Does anyone want to trade up?

Even after the NFL Combine, it's hard to see that any prospect is going to be the type of player that a team absolutely must trade up to No. 1 to acquire. Is Luke Joeckel the top tackle available? Some say it's Eric Fisher. Is Sharrif Floyd the top defensive tackle available? If he were, teams have hardly ever taken one with the first pick. There also isn't a consensus top defensive end, and that position is too deep to think that a team would trade up to take Bjoern Werner, Ezekiel Ansah, Dion Jordan, or another player. As of now, it seems that the Chiefs are indeed "stuck" with the No. 1 pick.

With Branden Albert set to hit free agency, there's the possibility that Kansas City will be left without a choice but to draft a left tackle. It really wouldn't be wise to spend that much capital on a quarterback and then not protect him. However, there's still a good possibility that the Chiefs will re-sign Albert and then what? Draft a right tackle (whether it's direct or indirect) with the No. 1 pick? Not bloody likely, mate. That's where it's still hard to predict what could happen, because if they don't sign Albert, then Fisher or Joeckel would be reasonable No. 1 picks. If they do, how do they proceed?

Cornerback Dee Milliner of Alabama could step in and start opposite of Flowers on day one. While it doesn't do anything for the offense, it could make things very difficult for Peyton Manning, Philip Rivers, and... whoever the Raiders' quarterback will be. But it's very rare to see a corner go that high. A defensive back hasn't been selected in the top four picks in this century. Kansas City would almost certainly have to find a trade partner to make Milliner its pick. Which leaves only one possibility: Defensive tackle.

It's still rare to see a defensive tackle go high in the draft, but it's not as rare as corner. We've seen players like Ndamukong Suh, Gerald Wallace, Marcell Dareus, and Dewayne Robertson go in the top four in recent years, while the Chiefs themselves took Glenn Dorsey (fifth overall) and Ryan Sims (sixth overall) in the last 10 years. Now they will see Dorsey hit free agency as well, with Tyson Jackson (former third overall pick) set to make enough money in 2013 that he could reasonably be released. That makes defensive tackle perhaps the top priority for Kansas City and, luckily enough, a position with at least a couple good options.

While Sharrif Floyd does not seem like the type of player you would usually see go first overall, nobody in this draft pops like that. No matter who it is, it's going to be someone that might have not have been a top five pick over the last several years. What the underclassmen out of Florida has instead is the potential to be one of the top interior lineman in the NFL. While that doesn't typically warrant the kind of value you'd normally want to see at this pick, the Chiefs might not be left with any choice. He can slide in to replace Dorsey immediately, and possibly outperform him from the get-go. Maybe the Chiefs prefer Star Lotulelei and aren't concerned about his medical issues. Maybe they prefer Sheldon Richardson of Missouri. After the trade for Smith, here is what seems certain:

If Kansas City does not re-sign Albert, then Joeckel or Fisher seem to make the most sense as players that would step in opposite of Eric Winston and protect Smith's blindside for a few years. They do not want to risk going to whoever will be backing up Smith, because it's probably not going to be Colin Kaepernick and we've seen what happens to the Chiefs when they have terrible quarterback play.

If the do re-sign Albert, then Floyd makes the most sense as of now. There really aren't any other feasible options out there. Also consider the coach.

Even if Kansas City just drafted the Poe-Poe last year, Reid might have to go to the Sharrif's department. (Because his name is like the cop).

• The best (and we mean worst) quotes from the Combine

• This is a fake column: Te'o can't outrun past

• Why every city is awful for NFL free agents

Alex Smith traded to the Chiefs