2013 NFL Mock Draft: Changes on the eve of free agency

How will free agency shape the 2013 NFL Draft?

Share All sharing options for: 2013 NFL Mock Draft: Changes on the eve of free agency

It's the eve of NFL free agency, which will make all mock drafts before it meaningless. In fact, in mere hours, the complexion of this mock draft will change when we find out where the top free agents are going. Because of that, this week's mock includes second and sometimes third choices for teams. The fancy layout was also left out because we may be updating this mock (or making a new one) during the week.

If you've been a regular reader here, many of these picks will look the same. Luke Joeckel is still the top choice for the Chiefs. But there were a few new looks this week, and one big dropper.

Have a mock draft of your own? Share it in the comments.

1. Kansas City Chiefs: Luke Joeckel, OT, Texas A&M
After franchising left tackle Brandon Albert, it looked like the Chiefs may not have a use for an offensive tackle with the first overall pick. But then they released Eric Winston. A right tackle with the first overall pick? For now, yes. Unless Albert signs a long-term deal, there's nothing to say he won't be one and out in Kansas City and Joeckel would move to the left side.

2. Jacksonville Jaguars: Barkevious Mingo, OLB, LSU
I've gone back and forth on this pick. A pass rusher that can play Leo in Gus Bradley's defense or a quarterback that could be considered an upgrade over Blaine Gabbert? Many are thinking the Jaguars go offensive tackle here, but Eugene Monroe is good on the left side.

3. Oakland Raiders: Sharrif Floyd, DT, Florida
The Raiders have numerous holes on their defense, and none bigger than at tackle. There aren't a lot of good free agent defensive tackles, so Oakland may not be able to upgrade that way. A player like Floyd would be an immediate upgrade.

4. Philadelphia Eagles: Eric Fisher, OT, Central Michigan
Chip Kelly's up-tempo offense requires the offensive linemen to be athletic and have endurance. Fisher may not be a freaky athlete like Lane Johnson, but he'll be among the most athletic in the NFL straight away. He can play the left side if Jason Peters' injury conveners persist, but he also has some experience on the right side. 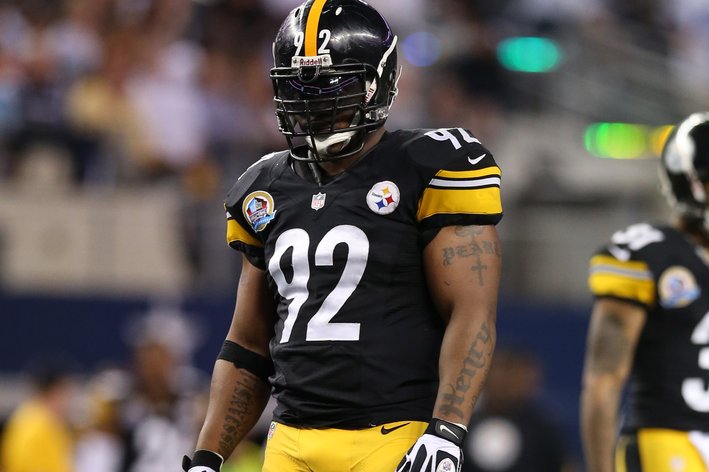 The offseason feeding frenzy is underway. Keep tabs on the latest news and rumors.

5. Detroit Lions: Ezekiel Ansah, DE, BYU
Despite his athleticism, Ansah's best spot in the NFL is at five-technique, not outside linebacker. It looks like the Lions are going to lose Cliff Avril in free agency and they also cut veteran Kyle Vanden Bocsh.

6. Cleveland Browns: Dion Jordan, OLB, Oregon
Moving to the 3-4, the Browns need to add talent at outside linebacker. Jabaal Sheard is set to play one of the outside spots, but it's unknown how successful he can transition from end. Jordan has a way to go as a pass rusher, but he's an incredible athlete just scratching the surface of his potential. The Browns have a lot of salary cap space, so this pick is fluid.

7. Arizona Cardinals: Geno Smith, QB, West Virginia
Which is more important to an offense, a left tackle or a quarterback? That's the issue the Cardinals will face in the first round. For now, we say Smith if he's available. Unless the Cardinals decide they want to roll with Kevin Kolb, or they like Matt Barkley of Southern California, this is probably the first round ceiling for Smith.

8. Buffalo Bills: Jarvis Jones, OLB, Georgia
Jones has received another clean bill of health, so now it's down to how NFL teams feel about his spinal stenosis issue. Assuming everything checks out fine, it would be smart for Buffalo to add the best pure pass rushing linebacker in the draft.

9. New York Jets: Chance Warmack, G, Alabama
The Jets will be in trouble if all the top pass rushers are off the board. Warmack wouldn't be the splashy pick like a defensive playmaker would be, but the Jets need help on the interior offensive line.

10. Tennessee Titans: Jonathan Cooper, G, North Carolina
Not one, but two guards in the top 10? That shows not only how good Warmack and Cooper are, but just how big of a need this is for the Titans. We've often considered a defensive end for Tennessee – and that's still a possibility – but guard is just as big of a need. The Titans need to find out just how good Jake Locker can be this season, and the only way to do that is to keep him clean. Cooper is a pass blocking technician and an get out on the move on run plays.

11. San Diego Chargers: Lane Johnson, OT, Oklahoma
The Chargers' need for offensive line help can't be understated. They'll need upgrades at both tackle positions and are probably losing guard Louis Vazquez in free agency. The athletic Johnson can be used on the left or right side.

12. Miami Dolphins: Dee Milliner, CB, Alabama
It's looking more and more likely the Dolphins will address the wide receiver position through free agency. If they do, adding a cornerback to replace Sean Smith is essential. Getting the best player at his position would be quite the coup for the Dolphins if they keep the 12th pick.

13. Tampa Bay Buccaneers: Xavier Rhodes, CB, Florida State
The best drafting philosophy is to take a combination of best player available that fits a need. That would be the case with Rhodes here. This is another pick that could be extremely fluid with Tampa being associated with Derek Cox and other free agent cornerbacks.

14. Carolina Panthers: Star Lotulelei, DT, Utah
The Panthers rarely take defensive tackles this highly, and the lack of talent on the roster proves it. Lotulelei is the best player available by far and tackle is the biggest hole for the Panthers to fill this offseason.

15. New Orleans Saints: Kenny Vaccaro, S, Texas
By signing Junior Galette to a three-year contract, the Saints have one outside linebacker spot set. New coordinator Rob Ryan could want a veteran for the other spot, maybe someone like James Harrison or Connor Barwin. Vaccaro will be associated with a lot of teams because of need at safety and he's the best player available. Roman Harper has just a year left in New Orleans, and Vaccaro would press him for playing time as a rookie.

16. St. Louis Rams: Cordarrelle Patterson, WR, Tennessee
You know the drill by now. The Rams didn't have a receiver with more than 700 yards receiving a year ago. They also parted ways with Danny Amendola. Patterson can make people miss in the open field and has the speed to take the top off a defense.

17. Pittsburgh Steelers: Damontre Moore, DE/OLB, Texas A&M
He's a chase defender who often gets by most on his hustle. He could fit well in the Steelers' 3-4 defense player on the outside. That would allow him to shoot inside gaps, which is his specialty. Don't forget, in 2011 Moore was used as a linebacker before playing end in 2012. 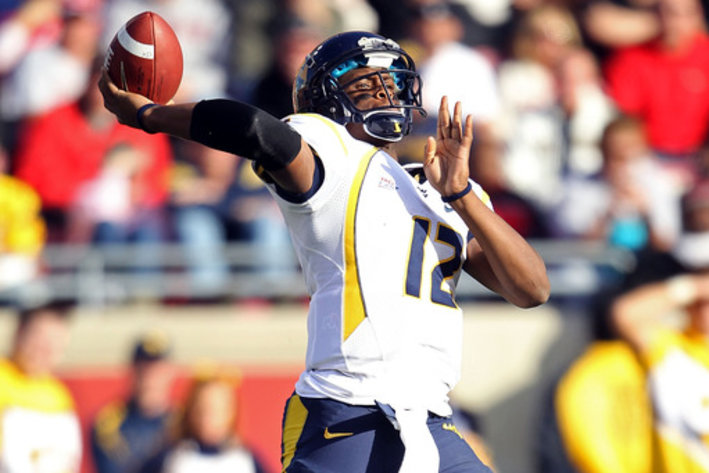 Which players are the best at their position in this year's draft? Check out our position-by-position big board for a look.

18. Dallas Cowboys: Sheldon Richardson, DT, Missouri
The Cowboys would be fortunate to land a gap-splitting defensive tackle like Richardson with this pick. He's by far the best player available, though his attitude may rub some teams the wrong way. Moving to a 4-3 defense, Richardson is the exact kind of three-technique the Cowboys need.

19. New York Giants: Tank Carradine, DE, Florida State
Carradine before Seminoles Bjoern Werner? Just watch Carradine explode up mock drafts after he holds his personal workout day next month. Ezekiel Ansah gets most of the Jason Pierre-Paul comparisons, but it's Carradine who may be the closest comparison.

20. Chicago Bears: Tyler Eifert, TE, Notre Dame
Under Marc Trestman, look for the Bears to utilize more West Coast offense principles. In that system, it will be important to have a pass catching tight end. Eifert is the best one in the draft and can make more of an impact than an offensive tackle.

21. Cincinnati Bengals: D.J. Fluker, OT, Alabama
This is the total opposite of a sexy pick like a speedy outside linebacker or a rangy safety. Fluker would be a replacement for free agent Andre Smith on the right side.

22. St. Louis Rams: Jonathan Cyprien, S, Florida International
The Rams have a talent-rich defense front to back, but need a safety that can play deep middle coverage. Not only can Cyprien do that, he can support the run in the box. He's an all-around safety with high upside.

23. Minnesota Vikings: Keenan Allen, WR, California
Minnesota needs to get younger on defense, a starting right tackle to replace Phil Loadholt and an outside wide receiver target. I don't expect Minnesota to add a big-money free agent wide receiver. Just imagine how Percy Harvin would react. There are plenty of good options in the draft this year. Allen can play inside and outside and has the physical skills to get yards after the catch.

24. Indianapolis Colts: Johnathan Hankins, DT, Ohio State
Hankins may not be the next Haloti Ngata, but Chuck Pagano will know how to use him in a similar way. Hankins can play all three spots in the Colts' three-man front. That versatility is valuable as the Colts are depending on former fifth-round pick Josh Chapman to be healthy or for Fili Moala to step up on the outside.

25. Seattle Seahawks: Bjoern Werner, DE, Florida State
Don't be surprised if Werner slides in the draft. He had an average combine and some question his motor. He's talented, certainly. He could fit on the front four because he can play the run and the pass.

26. Green Bay Packers: Arthur Brown, LB, Kansas State
The Packers' defense needs an injection of pure speed and athleticism. There is no more athletic linebacker in the draft than Brown. While he's not a pass rusher, he can fly to the ball if he's kept clean.

27. Houston Texans: Tavon Austin, WR, West Virginia
The Houston offense needs to add playmakers. Devier Posey looked like he could be one before getting injured late last season. With Andre Johnson getting up there in age, the Texans could use a player like Austin to open up defenses.

29. New England Patriots: Desmond Trufant, CB, Washington
Another cornerback for Bill Belichick to roll the dice on. Trufant pushed himself into the first round with his NFL Combine showing. He's a speedy cornerback that can play on an island and tackle. If the Patriots can't make something out of a player like Trufant, it would be a shock.

30. Atlanta Falcons: Datone Jones, DE, UCLA
The Falcons need pass rushers. Given where they're picking, they won't find a speed rusher at this point in the draft. Jones may not be a John Abraham replacement, but he can get into the backfield. If Atlanta wants to move to a 3-4, Jones is strong enough to play end in that kind of system.

31. San Francisco 49ers: D.J. Swearinger, S, South Carolina
The 49ers don't have a lot of needs, but could use more talent in the secondary. If Dashon Goldson isn't brought back, Swearinger would be a nice fit at free safety. He's good in coverage but can lay a hit as well.

32. Baltimore Ravens: Alec Ogletree, MLB, Georgia
It's no secret the Ravens need a middle linebacker. They need to replace Ray Lewis and maybe Dannell Ellerbe. It will come down to whichever middle linebacker impresses them the most. Of the three top ones available, Ogletree is the most versatile and athletic. That should give him the nod.