Oregon DE Dion Jordan and UCLA DE Datone Jones are expected to be first-round picks in the 2013 NFL Draft. The pair combined for 27 sacks over the past two seasons and offer great promise for whichever franchises are fortunate to choose them.

But based on recent history, we might want to be especially wary of Pac-12 pass-rushers performing at the same level in the NFL as they did in college.

Using the past eight seasons of college football data (since that's as far as the NCAA's database appears to track individual sack stats) and the last decade of NFL data, here are the average number of players from each power conference that rank highly in sacks per year, first at the college level and then at the NFL level:

Compiled via Pro-Football-Reference.com and NCAA.com.

As you can see, the Pac-12 produces more accomplished pass rushers at the college level than does any other conference. It also ranks last among power conferences in pass-rushing talent that translates to the NFL - and if I'd included the Big East, the Pac-12 would rank even lower, especially considering most of the players from Miami and Virginia Tech and such would go the Big East's way.

Let me put it like this: in 2007, the Pac-12 had as many players in the NFL's top 75 in sacks (Andre Carter, Terrell Suggs, Kenechi Udeze) as did Purdue (Shaun Phillips, Ray Edwards, Rosevelt Colvin). Purdue is the Big Ten's ninth-winningest program. That's the harshest indictment I can find.

Now, this is flawed data. But I think I can address both of your concerns. Maybe you have more than two, though.

Why not track individual players?

Because that would take far more time than we had budgeted for this, to be honest. The numbers we have here account for two full college classes and a whole decade in the NFL, likely meaning multiple coaching changes for almost every team at both levels. I find them sufficient.

But the Pac-12 throws the ball more.

Pac-12 defenders have more opportunities to sack quarterbacks. Pac-12 offenses throw the ball more often than do most conferences.

However, for at least six years now (I got bored of counting), the Big 12 has passed significantly more often than has the Pac-12, and Big 12 pass rushers perform at about the same level in the NFL as they do in college. In 2007, when 10 Pac-12 players and only one Big 12 player (Oklahoma's Auston English) ranked in college's top 50 in sacks, the Big 12 averaged 3.8 more pass attempts per team per game than did the Pac-12, meaning seven or eight more sack opportunities per Big 12 conference game.

One could also argue that more pass rush reps in college should mean greater effectiveness at the pro level anyway.

The Pac-12 is getting better.

It is. The Pac-12 averaged two defenders per year in the NFL's top 50 from 2003 to 2007, but 3.6 per year since then. However, that's still behind all other power conferences and maybe also the Big East.

So what's the problem here?

My theory: it all comes down to recruiting. And recruiting NFL-caliber pass rushers isn't the Pac-12's issue. You can find tall, fast, strong people anywhere in the country, then make them stronger and send them after quarterbacks. California by itself churns out plenty of spectacular athletes playing defensive line or linebacker, like Clay Matthews and Will Sutton and the 2013 class' Eddie Vanderdoes and 2014's Nifae Lealao.

What you can't find everywhere are enormous people fit to play offensive line at an elite level. And if your conference doesn't have very many good offensive linemen, your defensive linemen are going to (A) look much better than they really are and (B) fail to be pushed like they would be elsewhere.

And where do offensive linemen come from? From Corn Nation's data-heavy look at which areas of the country are the best at producing NFL talent at certain positions: 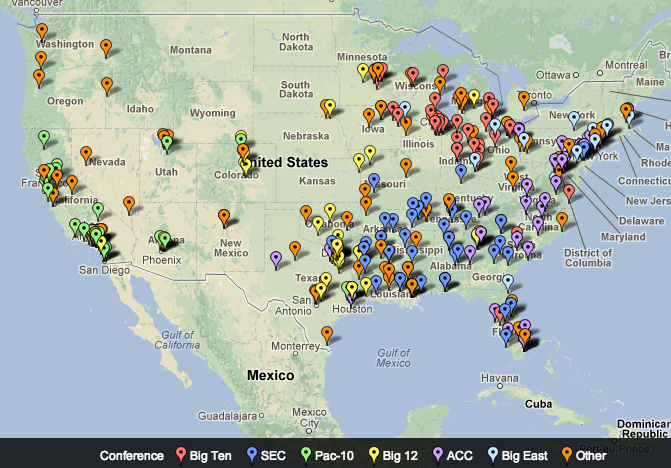 It's not that Pac-12 country is bereft of offensive line talent, with the Los Angeles, Bay Area, Phoenix, Salt Lake and Denver regions sending their shares to the NFL. It's just that there isn't as much as elsewhere and that it's all concentrated around a few schools. Also from Corn Nation, the percentage of NFL offensive linemen from top regions:

I don't really want to offer a conclusion here as stunted as "cain't nobody out west do any blockin'," but that could be one extreme interpretation of what the numbers are driving at. Pac-12 offensive linemen tend to be inferior to offensive linemen from elsewhere, therefore Pac-12 pass-rushers don't perform in the NFL as well as they do in college.

• Tyler Eifert could be a first-round surprise