Hey look, a black quarterback is actually not such a great guy. It must be April.

I don't know whether West Virginia's Geno Smith will be as good in the NFL as Cam Newton and Robert Griffin III are. But based on highly suspect scouting reports showing up just weeks before the draft, he's suddenly got much more in common with them as people than he had before.

For starters, he's a terrible person! This might be news to those of us who've followed his career and those who've covered him, but Pro Football Weekly's Nolan Nawrocki has read between the lines and exposed the real Geno, a "gimmick" who's "not committed" and "cannot inspire." (In fact, he's so committed to football he took an iPad to class in order to study more film.)

Meanwhile Matt Barkley has "leadership traits, strength of character and football IQ," despite Barkley's Trojans collapsing even more disastrously than Smith's Mountaineers did. 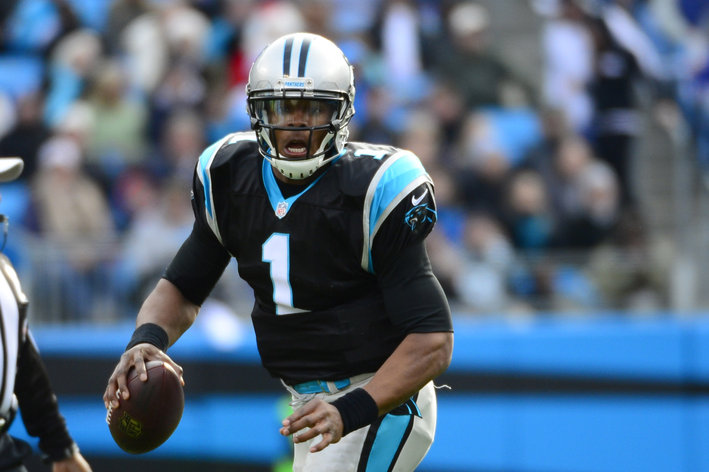 From April 2012: RGIII has character issues, and the NFL ruins everything

If Nawrocki's name is familiar, it's because he gave the same personality treatment to Newton, famously breaking down the Auburn star's "fake smile" despite never actually meeting him. And RG3 got similar treatment from some anonymous scouts just before last year's draft.

Note it's black quarterbacks this keeps happening to, and also note the specific two quarterbacks -- Akili Smith and Aaron Brooks -- to whom Smith is compared by Nawrocki are both black. Neither of those quarterbacks piled up their college stats in an Air Raid system like Smith's. Why not compare him instead to Tim Couch, Kevin Kolb or John Beck, who did? Those comparisons would be among the ones demanded by film and numbers, right?

But also note Nawrocki called Russell Wilson "the type of player you root for" and lobbied for Colin Kaepernick to take over the 49ers' starting job. This contrarian psychoanalysis isn't a systemic thing that evinces prejudice, more an annual treat for one very lucky player who so far has just happened to be black.

A review of the last three years in scouting reports revealing a little too much about the supposed personalities of black quarterbacks:

... Not a student of the game. Nonchalant field presence - does not command respect from teammates and cannot inspire. Mild practice demeanor - no urgency. Not committed or focused - marginal work ethic. Interviewed poorly at the Combine and did not show an understanding of concepts on the white board ... Needed to be coddled in college - cannot handle hard coaching ...

A cross between Akili Smith and Aaron Brooks, Smith is a gimmick, overhyped product of the system lacking the football savvy, work habits and focus to cement a starting job and could drain energy from a QB room. Will be overdrafted and struggle to produce against NFL defensive complexities.

Everybody is just assuming because of the Heisman and the socks and all that bs. . . . they are ignoring a lot of bad tape that he's had," a third scout said. "I don't think he has vision or pocket feel, which to me are the two most important components of quarterbacking. He's just running around winging it. He's (Michael) Vick, but not as good a thrower. [...]

He has better arm action and is more accurate with his deep ball, but he's not as good as Cam Newton," a fourth scout said. "As much as is written about his athleticism, his athleticism under duress in the pocket isn't even close to Cam Newton's. This guy, the only way he gets big plays with his feet is if he's got a wide-open field and the sea opens for him. He's got a little bit of a selfish streak, too. Everybody was laying on Cam, but for some reason this guy has become gloves off. He doesn't treat anybody good.

Played in a simplified, run-first, dive-option read offense with very basic high-low reads. Worked exclusively out of the gun and was very quick to run at the first flash of coverage ... Very disingenuous - has a fake smile, comes off as very scripted and has a selfish, me-first makeup. Always knows where the cameras are and plays to them. Has an enormous ego with a sense of entitlement that continually invites trouble and makes him believe he is above the law - does not command respect from teammates and always will struggle to win a locker room. Only a one-year producer. Lacks accountability, focus and trustworthiness - is not punctual, seeks shortcuts and sets a bad example. Immature and has had issues with authority. Not dependable.

Watch your ass in 2014, Teddy Bridgewater!

One could also make the case that some analysts, including Nawrocki, just aren't up to speed with the NFL's recent adaptations to longtime college offenses. But NFL coaches are catching on to the college game's benefits and working with their players' talents better than they have in decades.

So what's the explanation here? Sheer coincidence? I don't know. Do you know?

• Could Carson Palmer land in Arizona?