The NFL Animal Combine: Which non-humans would put up big numbers?

Humans are pretty good at the NFL Combine. But what if we let other animals compete too?

Share All sharing options for: The NFL Animal Combine: Which non-humans would put up big numbers?

Below, a selected animal for each NFL Combine drill. No further explanation is necessary. Please tell me in the comments if you know of better animals. Able to meet kicked ball before it begins descending. Probably cheating. Can jump from CenturyLink Field to Sun Life Stadium and back. No idea how that would ever be useful during a game. We should probably close all the doors at Lucas Oil Stadium before allowing bar-tailed godwits to compete. Let's not let birds do the Combine any more. Able to simply vault many defensive backs. Never fumbles, due to stashing football in sheath made of its own skin. We won't say anything if you don't. Hear me out. These drills are meant to measure quickness and agility, not speed. If you've had the Combine on at all this weekend, you've heard NFL Network's Mike Mayock say "quicker than fast" about 1,000 times. So here's the entire argument for mongooses:

@JasonKirkSBN: wouldn't a mongoose be quicker than a snake making then faster than quicker than fast? ppl forget that Wide, powerful base. Not very tall, but impressively low pad level. Hilariously long arms. Probably really bad at bench press, due to those arms. Dare you to tell the gorilla that. Great in loud environments, as it understands hand signals. Enormous hands capable of creating crude tools, like using rocks as simple hammers and stuff. You can't use hammers during a football game. Make sure your gorilla doesn't sneak a hammer onto the field. Capable of playing angry. Smarter than at least a couple graduates from SEC schools. Great burst. Actually a really good offensive lineman.

National Geographic actually raced Combine 40-yard record-holder Chris Johnson and Devin Hester against a cheetah. Patrick Peterson wants to try it too. It was on some sort of complicated course designed the give the humans a chance. Hester actually won. But in the 40, a cheetah would beat your car. Cheetah might run faster if pursued by Jadeveon Clowney.

Holds very well at point of attack. Profoundly slow off the ball. Swallows blockers whole. Does not use hands well. Has no hands. Can't defend in the red zone. No, I mean literally can't defend in the red zone, as it will not fit on the field. Structural integrity of stadium must be considered. Grounds crew will riot. Will need its own bus. Demands personal staff of water boys. Suited for one- and two-gap systems, and probably eight-gap systems too. Largest living thing* animal in history of earth. Needs faster swim move.

* Commenter notes giant sequoias can be larger than blue whales. This one is 275 feet tall and about 4,000,000 pounds. I'm concerned that it refuses to get low, however. 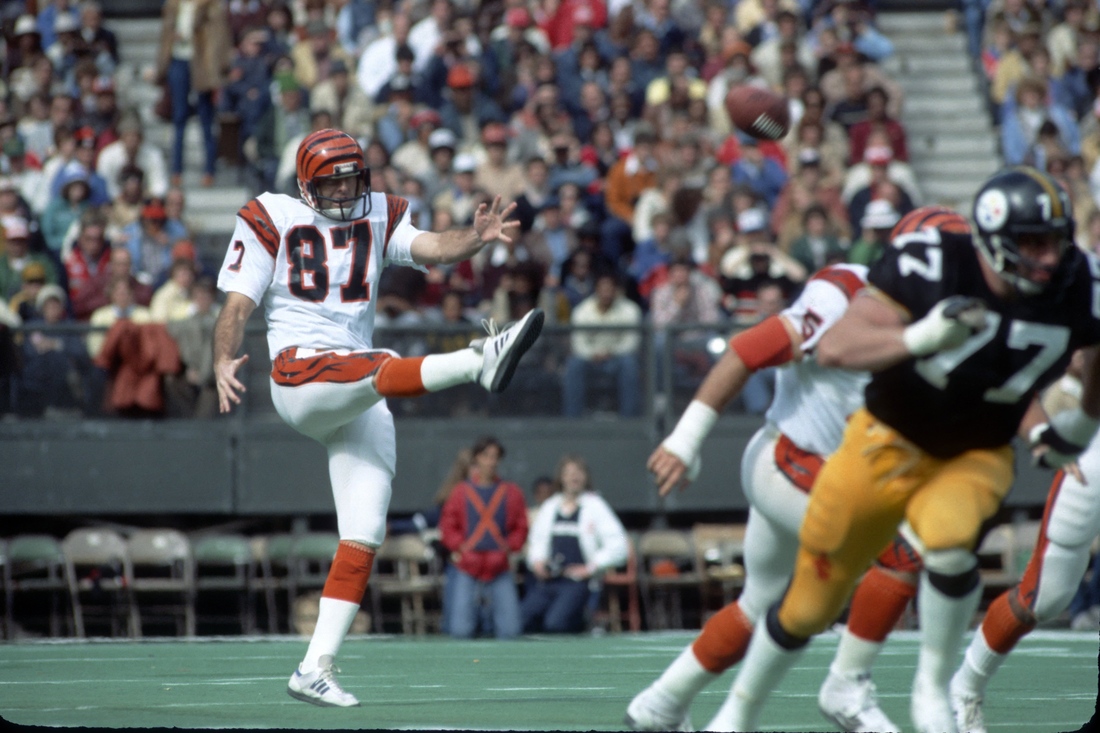 This human, answering to the name Pat McInally, achieved a perfect score on the Wonderlic test. Surely all the others do about the same.

Refuses to answer questions about character concerns. AWWW HEWWO TO YOU TOO BUDDY GIRL. Refuses to answer our bullshit job-interviewy questions about how many oranges can fit inside a Super Target. HER DON'T HAVE TO ANSWER QUESTIONS IF HER DON'T WANT TO. Unnatural responses; heavily coached. HER'S A GOOD GIRL; YES HER IS. Handles media well despite not actually saying anything.

Photos via Wikipedia Commons and Getty.