Teddy Bridgewater doesn't have traits that stick out in the pre-draft process, but that shouldn't matter.

Share All sharing options for: 2014 NFL Combine: Pre-draft process not the proper showcase of Teddy Bridgewater

INDIANAPOLIS - People spend a lot of time talking about what Teddy Bridgewater is not.

Let's face it. The pre-draft process wasn't built for guys like Bridgewater. Whether it's less-than-ideal measurements or his reserved personality, Bridgewater doesn't command the spotlight off the field. Like it or not, from the time Bridgewater took his last snap at Louisville, this pre-draft process is all he has left to sell himself as the top quarterback in the 2014 NFL Draft. 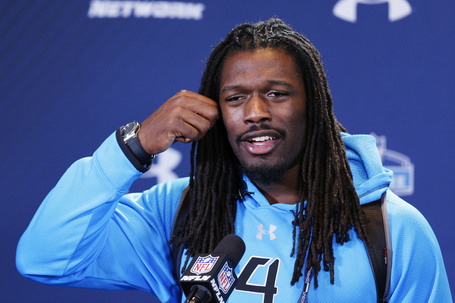 "Yes, no doubt I feel that I'm the best quarterback in this draft," Bridgewater said on Saturday at the 2014 NFL Scouting Combine. "I'm not just going to sit up here and say it. There's obviously actions that have to back up these words, and I'm just confident in myself and my capability to be able to play this position. I'm just going to go out there and prove that I'm the best guy."

But Bridgewater didn't prove it in Indianapolis. He, along with Manziel and Fresno State Derek Carr, decided not to throw at the combine. Instead, Bridgewater will wait until his pro day where he can throw to his wide receivers and be in a comfortable environment.

"The biggest thing was just me being a perfectionist, and I just want everything to go right," Bridgewater said. "Whether I'm taking a five-step drop and the guy's not on top of his route at the time, I just want to have that chemistry with the guys. I tend to look at it from a pro standpoint. When you're throwing in the offseason, you want to be with your guys to have that timing and that connection, so that was the biggest thing."

A lot of time has passed since Bridgewater last threw a pass for NFL evaluators to see. Maybe that's the problem. Everyone likes to say a player's tape is the most important part of the evaluation process. Yet, around this time every year, other factors come in to play. People spend more time talking about Bridgewater's thin wrists than his accuracy and anticipation as a passer. They forget about the toughness and leadership Bridgewater showed at Louisville and point out his quiet personality instead.

"I actually don't pay any attention to what's going on right now," Bridgewater said. "All I do is control what I can control and that's how hard I work each day continuing to play at a consistent level, at a high level. I just control the things that I can."

Bridgewater didn't seem worried about his decision not to throw. He stood on the field while other quarterbacks went through drills and was content to wait until his pro day. Bridgewater's tape is what he has to fall back on -- his ability to manipulate the pocket and make throws to all levels of the field. And those who think Bridgewater lacks confidence need to do a bit more digging around.

"I've always been a goal-oriented person and a goal-drive person, and from the time I was being recruited out of high school, whatever coach that came to recruit me, I told him, ‘Hey, look, I want to be on the three-year plan. I want to become a starter as a freshman, be all conference as a sophomore, graduate my junior year and be out the door,'" Bridgewater said. "I just looked back, and I weighed my options. I looked back and I asked myself, ‘Was I able to accomplish all of those goals?' And as I look back, I was. I have my degree, a degree in sports administration from the University of Louisville, I was a three-year starter, won a BCS game and won conference player of the year."

Quiet confidence isn't the norm for an NFL quarterback, but Bridgewater's quiet nature never bothered his teammates at Louisville. 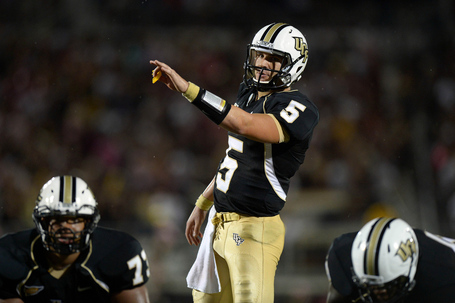 So go ahead and knock Bridgewater during the pre-draft process. Pick apart his size, even though he's added nine pounds and plans to add more. Pick apart his confidence and leadership even though he showed the maturity to balance football and taking care of his mother, who was fighting breast cancer, when he was 14 years old.

"I eat, sleep and breathe football," Bridgewater said. "There's not a moment that goes by that I'm not thinking about football whether I'm playing a game, practicing, watching film, even on the video game. A lot of people ask me what do I do on the video game. I call it taking virtual reps. Each day, I'm trying to get better. I'm trying to outwork my opponent, outsmart my opponent and just try to be the best quarterback that I can be."