Is Su'a-Filo the next athletic guard to get drafted in the top 15 of the NFL Draft?

UCLA didn't have much of a choice when it came to Xavier Su'a-Filo in 2013. The Bruins' offensive linemen were dropping like flies, and protecting quarterback Brett Hundley was becoming more of a challenge by the week. So Su'a-Filo, normally a guard, was forced to kick out to tackle at times. He made the transition look easy, too. By the end of the season, Su'a-Filo had six starts at left tackle and seven at left guard.

While Su'a-Filo doesn't necessarily have a skill set that translates to left tackle in the NFL, the fact that he was trusted to protect Hundley's blindside says a bit about his movement skills. In the 2013 NFL Draft, the Arizona Cardinals and Tennessee Titans both spent top 10 picks on guards, Jonathan Cooper and Chance Warmack respectively. What did those two have in common? They could move.

"Nowadays in the NFL, from what I feel like, as an offensive lineman, if you can be athletic, if you can move, or at the guard position if you can be more flexible and you can play multiple positions, then you're more valuable to a team," Su'a-Filo said at the 2014 NFL Scouting Combine.

Su'a-Filo can certainly do those things. But how high will he get drafted?

Agility/movement: Su'a-Filo's movement skills set him apart from other guards in this class. Not only did he have the athleticism to hold the edge at left tackle, but when he played guard, Su'a-Filo got to the next level with smooth, controlled movement. He has a lot of balance to his game and that helps him move efficiently across the line of scrimmage and within the second level of the defense. He has really quick feet and is able to move off his block in a hurry.

Pass blocking: While nobody will mistake Su'a-Filo for an elite pass protector at left tackle, he showed off a lot of nice skills at both tackle and guard that should translate immediately. For starters, the Su'a-Filo has a strong anchor in pass protection and is rarely put on skate. Part of that is due to the fact that Su'a-Filo is so quick off the snap. He's into his set before the pass rusher has a chance to get to the edge. When he does engage in blocks, his punch is adequate and he has the strength to move a pass rusher off his spot.

Quickness: As mentioned above, Su'a-Filo is quick off the snap, and that gives him a huge advantage. It's more than just his quick feet and balance, tough. Su'a-Filo has quick hands as well and reacts quickly to blitzes into his gap. A big reason why Su'a-Filo was as effective as he was as often as he was is how quickly he plays the game in all aspects.

Run blocking: Some may think that since Su'a-Filo is known for his movement skills that he doesn't excel in the running game. That's not exactly true. Su'a-Filo obviously has a ton of core strength. That much is evident in his ability to anchor against bull rushers on the interior of the offensive line. He shows off the same strength in the running game. Again, it helps that Su'a-Filo is so quick off the football, but he has the leg drive to open up running lanes.

As UCLA fans know, however, Su'a-Filo's biggest contribution to the Bruins' running game came in his ability to pull all the way across the line of scrimmage and make blocks on the move. In this aspect of his game, Su'a-Filo's technique is picture perfect. He gets off the line of scrimmage in a hurry and gets across the line without any hesitation or wasted movement. That's why at times he was able to make it all the way outside the opposite tackle box on running plays.

Just take a look at this play against Stanford. Su'a-Filo makes it to the second level of the defense and outside the tackle box in time to make an impact on the play. He almost doesn't look like a guard when he's moving. 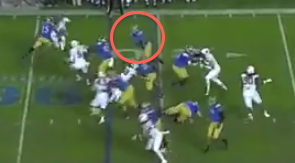 Strength: Su'a-Filo's core strength is noted above, but really he shows off a ton of functional strength in both pass blocking and run blocking. He has the leg drive to push defenders back in the running game. He also has strong hands in pass protection to re-direct pass rushers.

Technique: There aren't any noticeable flaws in Su'a-Filo's technique. Occasionally he will lose the leverage battle, but usually Su'a-Filo is playing with a solid base and excellent balance. He gets low and drives defenders in the running game and shuffles his feet efficiently in pass protection. For a player like Su'a-Filo to be as technically sound as he is as multiple positions is quite the feat. Rarely do you see Su'a-Filo bend at the waist, either. He's a flexible and athletic player at multiple spots on the line of scrimmage.

Final word: Since the middle of the fall, Su'a-Filo has been our top-ranked guard prospect. We grade him out as a top 15 player in this class due in large part to his movement skills and athletic makeup. Regardless of what scheme a team runs, Su'a-Filo can step in from day one and contribute. He may not be a tackle in the NFL, but the technical versatility he showed during his UCLA career will only be an added bonus for whichever team takes a chance on him.