It rarely matches up.

Every year, we spend months evaluating and ranking prospects for the NFL Draft. NFL teams do the same, and on draft night, it's the general managers and scouts who are putting their jobs on the line making the picks. As the draft unfolds, there are always spots where our rankings don't match up with the NFL's, for better or for worse.

For the last few years, I've been compiling a list of players I viewed as overrated. This year, I decided to wait until after the draft and see which players were over-drafted based on our rankings. This isn't meant to attack these players. Rather, it will be a reference we can look at to see where we were right, and where the NFL was right. Maybe we can all learn something.

Jimmy Garoppolo benefited from the postseason draft process. He performed well at the East-West Shrine Game and earned a trip to the Senior Bowl. The hype never really slowed down for him, and he ended up as a second-round draft pick. The Patriots had plenty of needs to address other than quarterback, and Garoppolo was a bit of a reach in the second round. New England will still be looking for Tom Brady's successor in a few years.

Jeremy Hill is plenty talented, but his off-the-field issues are tough to ignore. While other players with checkered pasts slipped in the draft, Hill went in the second round to the Cincinnati Bengals. Hill makes sense as a complementary running back to Giovani Bernard, but there were other running backs ranked higher on our board. 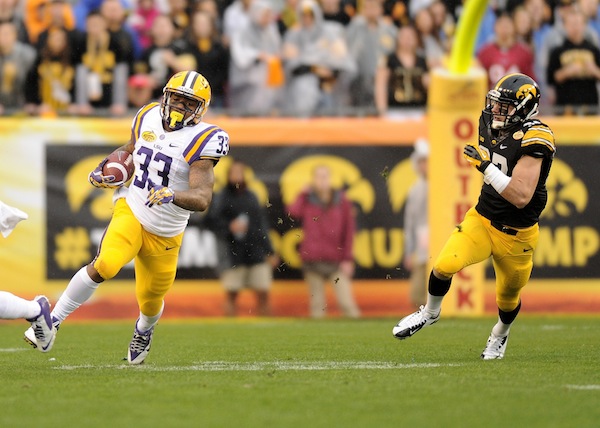 Much was made about how deep the 2014 NFL Draft was at wide receiver. That's what made it confusing to see the Carolina Panthers spend such a high draft pick on Kelvin Benjamin, who has some glaring issues with his route running, focus and hands. His upside is through the roof, but it's really hard to tell whether Benjamin will ever scratch the surface of his enormous potential.

The Seahawks had a need at receiver after losing Golden Tate to free agency, but they went after Paul Richardson a bit too early. Richardson has a knack for making big plays, but he has some issues with durability and drops that could plague him early in his career. Spending such a high pick on Richardson is a risk considering how much developing he has to do.

This may seem like a cop-out, but I didn't have much of an issue with where any of the tight ends got drafted. This year's draft wasn't loaded at tight end, but there were a handful of decent prospects who should contribute early. They all came off the board in the appropriate range.

If Taylor Lewan played how he was expected to during his senior season, the Titans would have been more than justified taking him with the No. 11 pick. That's not what Lewan did, though. He was inconsistent and showed some deficiencies against inside rushers. Without even taking into consideration the trouble he got into off the field, Lewan felt like a slight reach at this spot.

Justin Britt is a talented offensive lineman who is versatile enough to play on the interior or the outside. Britt fits the Seahawks' scheme well and could develop into a starter. Listing him here isn't a slight on him as a player, just a question of whether or not the Seahawks pulled the trigger a little early. Seattle has had some unconventional drafts in recent years, but they tended to work out well. Time will tell how 2014's class pans out.

It was tough to find too many defensive linemen who were over-drafted, but Ego Ferguson jumped out. There was a ton of talent left on the board on the interior of the defensive line. Ferguson is a big project at the position and never really put it all together at LSU. Maybe some NFL coaching will do him good, though.

Count on Chip Kelly to make a pick that left the NFL Draft community scratching its head. This is another player who we liked, just not as a first-round pick. While he's an intriguing fit in Kelly's 3-4 scheme, it's just tough to envision Smith having a high enough ceiling to warrant a first-round selection.

Bleeding Green Nation reacts to the selection of Smith

While the third round wasn't a terrible spot for Chris Borland to come off the board, especially given how many draft picks the 49ers had, it still felt a bit early for an undersized linebacker like Borland. Throughout the pre-draft process, I wasn't quite as high on Borland as most, so I figured he belonged in this spot. In a few years, we'll find out if Borland was worth the pick.

Jon Bois goes in-depth to determine just how bad teams are at evaluating talent. Did you know that a dart board would have been smarter than Matt Millen? It's true!

The Saints came into the draft looking for some extra help at cornerback, but the player they selected in the second round probably won't be able to make an immediate impact. Stanley Jean-Baptiste went in the second round on physical tools alone. He's physical, aggressive and has the size to be a big-time press cornerback. That being said, Jean-Baptiste is a bit of a project. His technique and straight-line speed come into question at times. Can he handle the fastest and quickest receivers in the NFL? We're about to find out.

There are certain intangible traits about Lamarcus Joyner that jump out right away. He's super competitive and was one of the leaders for Florida State this season. But anyone expecting him to be the next Tyrann Mathieu is ignoring the fact that he doesn't have nearly the quickness or speed that Mathieu does. Joyner may not have a fixed position in the NFL, and it's tough to project him as an impact player as a result.