For the third time since 2007, the Browns have used the 22nd pick in the draft on a quarterback. Now it's time for the electric Heisman Trophy winner to prove he's not another Brandon Weeden or Brady Quinn.

Share All sharing options for: Johnny Manziel drops back to the Cleveland Browns in the 2014 NFL Draft

This is not the first time the Browns stopped a quarterback from falling past the 22nd pick in the draft. In 2012, the Browns took Brandon Weeden 22nd. In 2007, they used that same choice on Brady Quinn.

Both busted. Both helped make the Browns one of the jokes of the NFL. Manziel, the electric Heisman Trophy winner from Texas A&M, has a chance to turn that around. 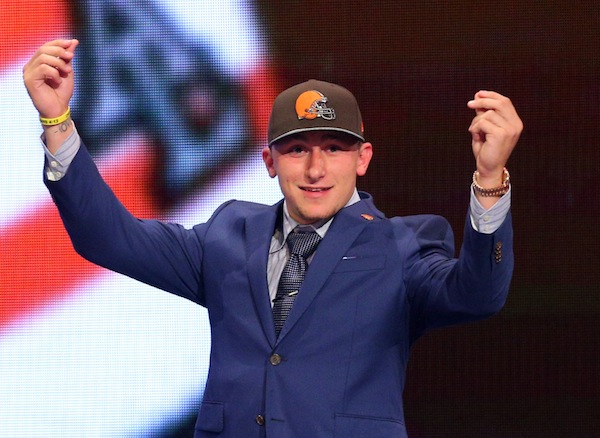 Manziel has been tutored by quarterback guru George Whitfield since 2012. It was no surprise at the NFL Scouting Combine in February that Manziel was well aware of Cleveland's history of bad quarterback selections. He knew they've run through 20 since coming back to the NFL in 1999 because Whitfield has been schooling him about the city. Whitifield is from Massillon, Ohio, a city about an hour south of Cleveland near the Pro Football Hall of Fame.

More than anyone else, Whitfield understands the rough conditions of Cleveland – particularly the unforgiving weather that rolls off Lake Erie. He knows Manziel has the physical ability to be a success with the Browns. That starts, largely, with Manziel's hands. What the short Manziel lacks in height, he makes up with hand size.

"Hand size is more of a direct correlation to functionality than height," Whitfield told SB Nation at the NFL Combine. "There’s all kinds of big, tall guys, but you can’t really impose your height on the ball. Your hand can, though. So I don’t think he’s going to have a problem spinning the ball in the rain and the snow and the heavy wind drift that we get in Cleveland. He’s not a dome quarterback. He’s a scrappy guy that’s going to make plays, and he’s got mitts."

Maybe it was the concerns about his size. Maybe teams didn’t think his style fits in the NFL. Maybe it was the poor games against LSU and Missouri in 2013. Or maybe it was because of the off-field circus that accompanies him.

Still though, Manziel fell in the draft. He wasn’t even the first quarterback picked. That was Blake Bortles, the surprise choice for the Jacksonville Jaguars at No. 3. He wasn't even the Browns' pick when they traded down to No. 8. That was cornerback Justin Gilbert.

None of that matters anymore, though. Manziel is the choice for the Browns. Now he just has to prove he's not the next busted 22nd pick for Cleveland.