The game of the Millennium of the week! 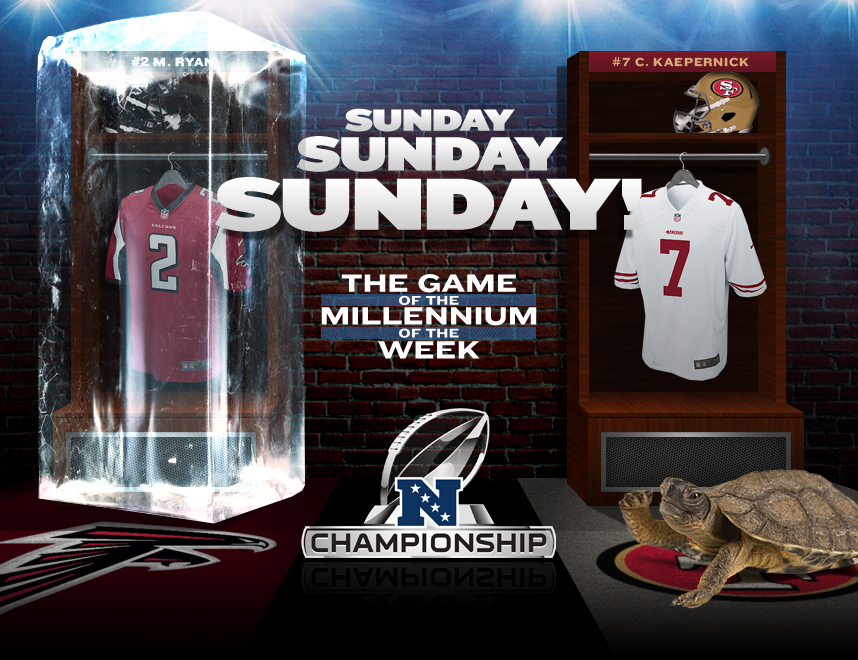 So there are these two football games this weekend. Apparently they're pretty important too. Let's face it, America has had its fill of Tom Brady and the New England Patriots, and there are only so many Ray Lewis inspirational highlight videos we can stomach. Football fans need something new. Fortunately, the NFC is giving us just that in a conference championship game pitting the San Francisco 49ers against the Atlanta Falcons.

The Patriots became an overnight sensation that never went away. The Ravens have been so good for so long that you forget they were once the Cleveland Browns. The Niners and Falcons franchises have both experienced success in the past, but not like the Patriots or Ravens over the last decade.

Since Atlanta's last trip to the Super Bowl, in Jan. 1999, the team made one more trip to the NFC Championship, losing that one to the Philadelphia Eagles in Jan. 2004. It was Jim Mora's first year as head coach, and his last taste of relevancy. After that, Falcons fans had to endure two more years of Mora and 13 games with the bizarre Bobby Petrino before Arthur Blank finally got his house in order.

Matt Ryan, Michael Turner, Mike Smith and GM Thomas Dimitroff ... the Falcons got their shit together in 2008. There's been one small hitch: the Falcons didn't win in the playoffs, despite three trips in four years. They damn near lost again last week, saved by some last-minute heroics against Seattle. Fate has to be on Atlanta's side, right?

If you're old enough to remember, the 49ers had some good years of their own from the early 1980s through the first part of last decade. Joe Montana, Steve Young and even the outlier Jeff Garcia, were part of one of the greatest dynasties in professional sports.

But all the sudden that collapsed, leaving San Francisco as just another afterthought in a desolate NFC West. This team has come a long way since Mike Singletary turned his bare assed admonishment into a PowerPoint slide only Gregg Williams could love.

The team found a more productive strain of instability in Jim Harbaugh. He's taken his team this far with more than just crazy stares. Colin Kaepernick, his quarterback protege, might be Harbaugh's best move yet. The new fangled pistol offense is here to stay, and it looks like it could give Atlanta or any other team some real trouble.

One of these Phoenixes is going on to play in the Super Bowl. It's probably going to be the Falcons, whose linebackers and defensive backs might be just enough to control Kaepernick.

What Kaepernick did to the Packers on Saturday night was cruel and unusual, and he's basically been doing that to the entire NFL for the past two months. This shit is getting ridiculous.

Did you hear that Harbaugh got pictures of all his players as high schoolers and taped them over each player's locker, then refused to explain why he did it? Just a friendly reminder that football coaches are all insane.

If you have trouble rooting for the 49ers for some reason, just remember that if San Francisco wins there's a good chance that Randy Moss can then win the Super Bowl, possibly against the Patriots. God, that would be awesome.

The end of that Falcons game had to be terrifying and borderline unwatchable for Atlanta fans, but now that it's over ... Can you imagine a better way for Matt Ryan to silence his critics? I mean I'm sure stupid people will still doubt his #CLUTCH credentials, but that final drive was about as badass as it gets.

We have no idea how he's still doing all this, but every time he makes an outrageous catch it all gets a little more unbelievable. And I know Twitter is full of LIES and fake girlfriends, but this tweet definitely makes me a Tony Gonzalez fan.

No matter what happens Sunday, either Randy Moss or Big Boi is going to be involved with the Super Bowl. God is good, y'all.

The Georgia Dome and Atlanta have been in a relationship for just around 20 years, but you know how nouveau-riche barons like ATL are: impatient, in need of something shiny, and perpetually insecure about keeping up with the Houstons and Seattles of the world. Honey, I know we need to pump a bit more cash in that retirement fund, but RETRACTABLE ROOF, HONEY!

The Dome is easily accessible by MARTA, and surrounded by reasonably affordable parking. For an extra thrill, get the real Walking Dead feel by parking underneath the overpasses surrounding the Gulch, the primary tailgating area. The Dome is fine enough, and happens to be quite loud when people are excited about the game. Enjoy it: like anything else in Atlanta, it could be bulldozed at any second, perhaps in the middle of the third quarter if the Falcons defense cannot contain Colin Kaepernick.

By The Falcoholic, Dave Choate 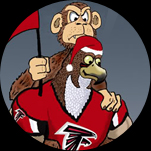 Getting The Monkey Off Your Back Matters

The Falcons came into the Divisional Round with one hell of a screeching, frothing chimpanzee on their backs. That's what not winning a playoff game for five seasons and incurring the wrath of the giant sets of chattering teeth in Bristol will do to you. Beating the Seahawks in a thrilling, last-second victory wasn't just getting the monkey off the team's collective back. It was tossing it off the deck of an aircraft carrier and following up with a torpedo. To put it simply, the Falcons actually might be feeling less pressure going into the NFC Championship Game than they were a round ago. That can only be a good thing for a team that tends to tense up and screw up in the second half of games. 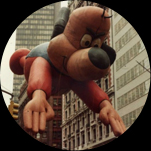 The 49ers scare everyone with their crazy legs quarterback, potent run game and Great Wall-esque defense. Perhaps that's why the Falcons are the largest home underdog in decades, even larger than the the Underdog from the Macy's Thanksgiving parade. I say screw that. As good as the 49ers defense is, the Falcons are bristling with firepower and will need to challenge that secondary to win. That means deep strikes to Roddy White, screens to Julio Jones, insanely acrobatic catches for Tony Gonzalez and Jacquizz Rodgers running over safeties with impunity. The Falcons will have a tough time winning this game, for sure. But they'll put up a hell of a fight either way. 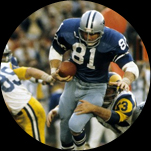 Can we reverse that spread?

The 49ers enter the game as the biggest road favorite in a conference title game since 1978. While that can inspire confidence, 49ers fans will be quick to point to the team's success as an underdog. I think most every team prefers to be disrespected, even as they are complaining about being disrespected. The 49ers will need to avoid a flat start, as they have not been a great team when playing from behind. 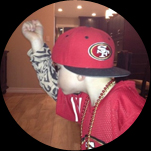 How long until the Steamin' Willie Beamen video?

It is safe to say Colin Kaepernick is officially a big deal. He was doing big things during the regular season, but his record-setting performance against the Packers has turned Kap and Kaepernick'ing into a national phenomenon. 49ers fans have some concerns about what all this media will do to him, but all indications are he remains focused solely on football. We'll believe that until the first music video comes out. 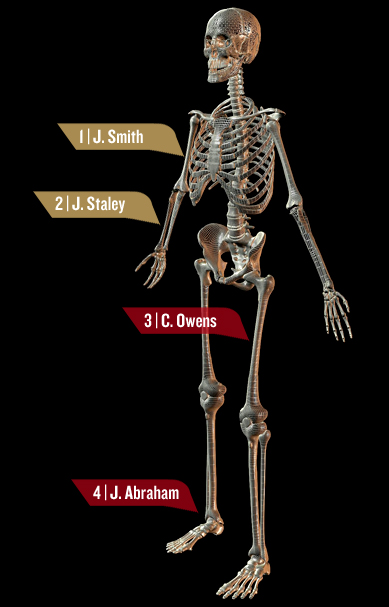 Ray Lewis missed the better part of the season with a triceps tear, but Smith didn't tear his all the way. Still, he's risking a more serious injury -- the complete tear -- if he continues playing. Not that 49ers fans would recommend him sitting out.

He tweaked it last week, making some 49ers fans worried. But he's good to go this week, expect him to play.

3. Chris Owens, hamstring, not sure

He missed the last two weeks with a hammy. A hamstring. Not a ham.

Old, yes. Effective, yes too. He's going to play with an ankle injury -- the question is how effective he'll be at less than 100 percent. 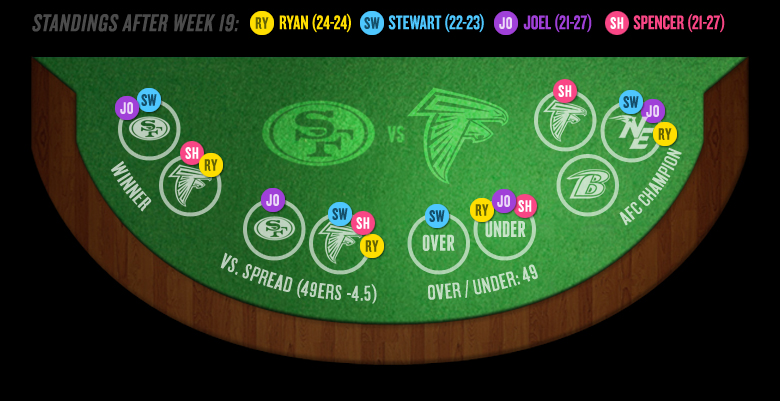 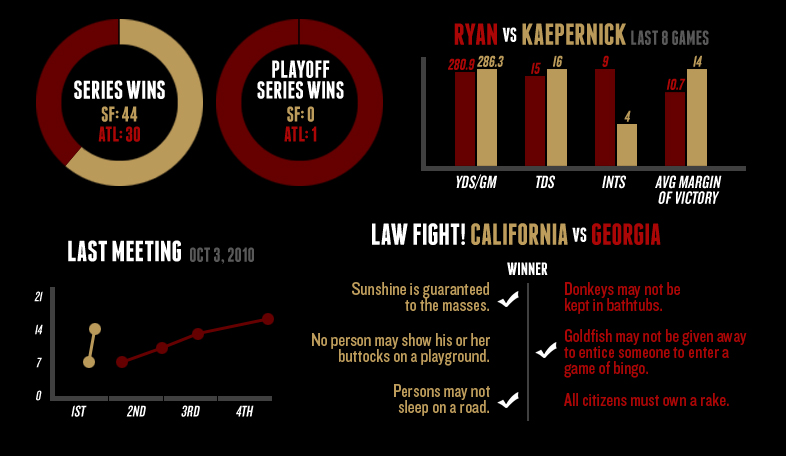 Couldn't think of a better way for Ray Lewis to end his career then with a loss to Tom Brady.

My guess is that come April, this doesn't hurt Te'o's draft stock as much as we assume it might right now.

If there was only a way we could tell. RT @ProFootballTalk: Johnathan Joseph thinks Texans are better than the Patriots

Text from a Pac-12 coach who I asked about Chip Kelly going to Eagles: "Great. Let the f@ckin NFL deal with him."