The Designed Rush, Week 6: The Great And Unavoidable Helmet-To-Helmet Freakout

We saw several nasty collisions in Week 6, several of which resulted in concussions. Which inevitably brings up the topic of how to stop these hits. It's a conversation worth having ... if anyone knew what the solution is.

Share All sharing options for: The Designed Rush, Week 6: The Great And Unavoidable Helmet-To-Helmet Freakout

With a spate of helmet-to-helmet shots and resulting concussions seen on Sunday, the full-on hue and cry about the dangers of head injuries in professional football is back at full pitch for the first time in probably... days? Weeks? It's going to be a regular discussion for a while. Every time this happens, the debate will start anew. This is at once predictable, completely understandable and also incredibly frustrating because no one really has a sound idea about how to fix the matter.

I started to read Mike Pereira's Fox Sports column on what ended up being the overarching theme of Sunday and had to force myself past this opening paragraph:

I am really bothered by the number of helmet-to-helmet hits we saw in Week 6 and the subsequent concussions that were caused as a result of those hits. Some of them were legal, and some were unavoidable. But, plain and simple, they are cheap shots, and the league needs to deal with this immediately.

If some of the hits were legal and unavoidable, how then were they cheap? Now that the NFL is in discussions about policing the matter with possible suspensions for helmet-to-helmet contact, this becomes a potentially huge issue for the remainder of the season. Studies conducted within the last few years linking football and brain injuries only make the issue all the more pressing to confront. The NFL has stonewalled discussion for so long on the matter that it might be forced into a quick fix that could damage its product in the near term.

That isn't to say I'm in the camp that says you dilute the quality of the game by trying to prevent head injuries when possible. Only that when the subject is getting beat into the ground by the media, the NFL, rather than find long-term solutions, could issue a few token solutions and create another officiating disaster as it has with protecting the quarterback. Just as fans question whether roughing the passer calls are handed out in greater frequency for star quarterbacks, unless penalties are given for each helmet-to-helmet contact, it will create an atmosphere where fans will spot some sort of favoritism going on. That's a dangerous amount of vagueness for a ruling that could result in suspensions.

Another important upshot is how defenders would be expected to cover receivers. Already there has been the imposition of the rule against striking defenseless receivers. In the case of DeSean Jackson and Mohamed Massaquoi, it was two players being held out to dry by their quarterbacks while running routes over the middle. When Pereira mentions those shots are unavoidable, some sort of alternative has to be offered about how a defender is supposed to jar the ball loose on that play. Otherwise you might as well lengthen first downs to 20 yards if the defense is going to have to concede short passes like that.

The argument that if the league eliminates helmets then it eliminates players going at each others' crania is a logical one, but impractical for any number of reasons. While progress has been made to create helmets that help deter concussions, that obviously isn't happening fast enough. The real crux is, while the NFL waits for a solution to simply present itself (or stubbornly waits for the issue to go away, which it won't), it appears content again to sow confusion and uncertainty into its rulebook solely for the sake of a quick PR boost. "Look, the NFL cares! We just suspended a guy who couldn't help but make that hit! And we'll do it again next week! Until players get the idea that they shouldn't be doing things that will bring bad press on the league!"

Torain is a monster for the skins. This may be his spot to lose. Ever here of Wally Pipp!less than a minute ago via web

Yes, Ryan, we've heard of Wally Pipp. Even though there have been hundreds of cases in NFL history where an established veteran has lost their job because an up-and-coming young player made a splash while the veteran missed time because of injury, the shopworn baseball cliche somehow retains its currency in present football discourse. Can we make it our mission that the next time it happens with a high-profile player in the NFL that that becomes the standard reference? And, as good as Ryan Torain looked against the Colts (something running backs have a habit of doing against that defense), let's not compare the starting running back position on a pretty average Redskins team with a man who occupied first base for a Yankees team that was either in or winning the World Series each year in the early part of the '20s. Either way, let's extinguish the 90-year-old baseball cliches, shall we?

I was really digging this ad. The Wynn Stewart song is amazing and nicely complements the concept, which admittedly isn't particularly novel or even that clever, but the execution is amusing enough that I don't really care. That is, until they go way overboard at the end. Oh, so the car is so cheap, the guy who scrimped and saved can even afford two of them. That's great. And where does he store them? HIS FREAKING TWO-CAR GARAGE YUPPIE PAD WITH THE CIRCULAR DRIVEWAY. You're such a scrappy little underdog, Guy Who Has More Money Than I Do.

All the time devoted to Ben Roethlisberger's comeback is disgusting. NFL should be ashamed it reduced his suspension.less than a minute ago via TweetDeck

Such an interesting time for the Palm Beach Post's Dolphins reporter to take a stand on Ben Roethlisberger. Not when Roethlisberger's conditional suspension was actually reduced, as it was originally intended when it was handed out by Roger Goodell with clearly stated objectives to improve Ben Roethlisberger's behavior, or even when it was issued. No, Thompson suddenly felt he needed to air his disgust once Miami is not set to take on the Steelers this coming Sunday. Never let it be said that old guard media reporters can't be homers. Plus, by drawing attention to the overload of Roethlisberger coverage, you're only adding to the odious problem you decry. PART OF THE PROBLEM, THOMPSON!

Even though the Patriots and the Ravens have played three times in the last two seasons, it somehow isn't quite enough. Late in the fourth quarter on Sunday, Brady did that thing where if he hits the ground he's going to flail around wildly until he gets a referee to throw a flag. This worked at a critical time of the Ravens-Patriots regular season meeting last season, which did nothing but further feed the Ravens' paranoid suspicions that the refs are always out to get them. This time, Terrell Suggs was in Brady's ear after another banner hissy fit by Brady.

Asked after the game what Brady said in response, Suggs said:

"He was trying to tell me how to bag a Hollywood actress. He said, ‘If you want to get a Hollywood actress, take my seminar on Saturday.’ …He was going over the Dow and the economy and politics. He doesn’t really talk football that much."

Not bad, T-Sizzle, not bad at all. But wait, Tom Brady got snaps of his own:

"Well, he had his chance so maybe if he gets another chance he can try to back those words up. We play those guys a lot and they've only beat us once..they talk a lot for only beating us once in nine years."

Oh man, Terrell Suggs, you just got faced but a guy who gets made fun of by Justin Bieber. Sucks, dude.

- Perhaps the most hilarious moment of Sunday happened in the Jacksonville front office. The Jaguars on Sunday traded safety Anthony Smith to a Packers team in desperate need of help to a battered secondary. This might not be all that noteworthy were Smith NOT SCHEDULED TO START THE FOLLOWING DAY. Not that Anthony Smith will ever be confused with anyone even adequate that their job, but that's a pretty hilarious insult by the Jags front office.

- Via Black Sports Online, a Takeo Spikes celebration that by itself makes me want the Niners not to win another game this season.

- How great is it that on the Cowboys final desperation play that is was Tony Romo who screws it up with a forward pass beyond the line of scrimmage? I submit that it was pretty great.

- Not to make light of gruesome head injuries, but there may never be a more Philly tribute to an injured player than to have a shirtless guy with a likeness of that player's jersey painted on him clapping as that player is being helped from the field. 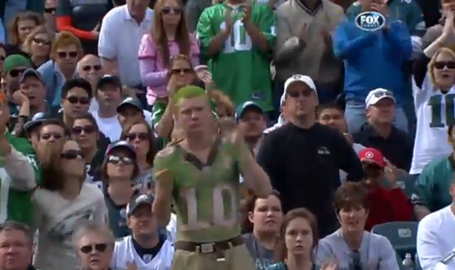