Up next for the NFL as it prepares for next season (whenever that is): examining the rules surrounding fumbles, thanks to the Steelers' controversial win over the Dolphins.

So the NFL competition committee's offseason agenda got that much thicker yesterday with the highly contentious Ben Roethlisberger fumble ruling in Pittsburgh's 23-22 win in Miami. As was the case with the Calvin Johnson catch earlier in the season, a correctly interpreted but convoluted rule kept a team from making a decisive play that could have earned it a victory.

Between the two, the win was more clearly denied to the Lions by the referees. Even if the Dolphins were awarded position after Roethlisberger's fumble -- it's likely but ultimately unprovable that they would have recovered it even if Steelers players didn't back off the scrum, as they claim, after being told the play was a touchdown by the officials -- there remained about two and a half minutes on the clock with the Steelers holding all three of their timeouts. Miami's inability to get so much as one first down faced with the chance to win after the fumble ruling suggests the Dolphins might not have been able to run that clock out without giving it back to Pittsburgh.

We'll never know, obviously, which is what rankles fans. That and the fact that viewers saw a Dolphins defender come away with the ball yet later heard an official tell them upon review that it couldn't be determined who exactly recovered it. It's one of those situations that seems completely counter-intuitive unless you have an NFL rule book at the ready. But because the referee's whistle was blown at the touchdown call, a review could only contest whether in fact it was a touchdown, because according to that initial ruling, the play is over. Unless one Dolphins player immediately fell on the ball with no struggle, that wasn't going to change.

What will likely have to change is an official's ability to reward possession if a whistle sounds too early on a potential turnover. It's a scenario that crops up with regularity in the NFL, but as Johnson's non-catch brought issues with reception rules to the fore, so too will Roethlisberger's goal-line fumble. While the NFL showed with the helmet-to-helmet contact controversy that it is only willing to change the emphasis on existing rules in the middle of the season. That means it won't be until next season (whenever it is) that fans could see a change on rules regarding post-whistle possession changes or what determined a completed catch when a receiver goes to the ground.

Of course, Roethlisberger's fumble might have gotten far more attention, but it certainly wasn't the only questionable fumble call late in a game yesterday that might have influenced the outcome. In Baltimore, the refs did the opposite of what the refs in Miami did: they held onto their whistles for too long when a ball carrier's forward progress was impeded rather than ruling a play dead prematurely when the ball came out at the goal line.

That call, though highly questionable, won't result in sweeping changes like the Roethlisberger fumble might. But it highlights the difficulty that an official faces when trying to determine the end of a play, especially in this new climate of safety where the longer the scrum goes on, the greater the chance someone hurts themselves fighting for the ball.

So, as predicted, we have our new scandal of the week, which already pushes what seemed like a sport-altering catastrophe onto the back burner. At least until another high-profile player gets hurt.

Is there a reason I am missing why Andrea Kreamer is still working the sidelines? It's not like she has an unbelievable football IQless than a minute ago via Echofon

Best watch yourself, Eric Winston. More talk like that and NBC might never pull you aside for a postgame interview. Just kidding. Like they would ever talk to anyone who isn't a quarterback, running back, receiver or head coach. Also, her name is Andrea Kremer. That's poor football media IQ, buddy.

In The Future, Gene Steratore Should Not Be From Just Outside Pittsburgh

In the most maddeningly inane and yet omnipresent bit of outrage about the fumble ruling at the end of the Steelers-Dolphins game is Gene Steratore's being from Washington, Pa., used as evidence that he is horribly biased and therefore unfit to officiate any Steelers game. Try to find me an article from a mainstream publication that doesn't reference this fact in a suggestive way. Apparently the solution to eliminating perceived referee bias is to hire only guys from the hinterlands, far removed from any NFL market which might infect them with a desire to swing games in favor of one team. By the way, Tony Corrente, who was head official for the Chargers-Patriots game in San Diego on Sunday, hails from nearby La Miranda, Ca. How was he able to overcome his all-powerful desire to swing the game in favor of San Diego caused merely by his proximity to their home city? Corrente is an example to regionally compromised officials the world over.

THE NFL IS TOTALLY CLEAN NOW! ALL VICIOUS HITS HAVE BEEN SUCCESSFULLY ERADICATED! GLORY BE THE WISDOM OF THE GINGER HAMMER!

There's no question that defensive players pulled back from nailing receivers or even some ball carriers on Sunday in the manner they might have prior to the Week 6 fulmination of the helmet shots issue. You can see Ravens safety Dawan Landry pull up significantly on a Lee Evans touchdown catch in the first half of yesterday's game in Baltimore.

Peter King gushed approvingly during the Sunday Night Football Night In America Night broadcast (night) that even last week's manufactured villain, James Harrison, pulled up short when he was presented with the chance to dive head-first at a ball carrier in Miami. Progress!

Except, you know, it's not as though helmet-to-helmet contact was completely absent from the games. It was just the sort that the NFL doesn't want to brand as illegal, which is to say that against quarterbacks and receivers. 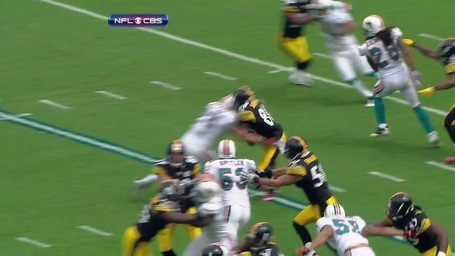 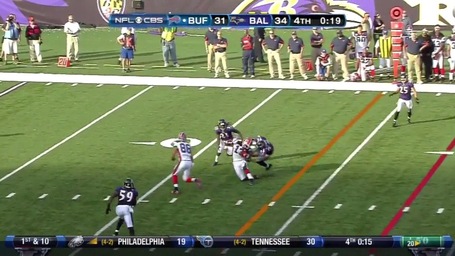 Remember in the NFL video where Ray Anderson praises Ray Lewis for making an admirably clean hit on Dustin Keller in Week 1. That's how you nail a receiver, right? Except on Sunday late in the fourth quarter, Lewis dove at Steve Johnson's head and jerked it back from behind. That's what we in the business like to call a horse collar tackle. No flag for that, by the way. But it's okay. I checked Johnson's salary and he doesn't make $10 million per year. RIGHT AGAIN, CHRIS KLUWE!

No one trades in LOUD NOISES as an advertising strategy quite like Under Armour, what with their "CLICK! CLACK!" and "WE MUST PROTECT THIS HOUSE!" campaigns of yore. It appears someone in their marketing department caught Inception over the summer. Under Armour must have figured that it wasn't its unraveling plot devices and inventive action sequences that led to its success, but rather the ship horn BRRAAAAAHHHHHMMMMM sound that has come to be one of the most mocked things about the movie. Frankly, I like it when a company has the courage to come up with headache inducing cacophonous noises of its own. STOP BEING DERIVATIVE ABOUT GRATING SOUND TRADEMARKS!

- Was there any way Kris Brown wasn't going to miss a critical field goal in his stint with San Diego? The first week on the team is only slightly earlier than expected, though it's still hilarious that the Chargers would seek to replace an injured kicker who routinely botches big kicks in the playoffs with one who makes a habit of missing critical attempts in just about every game he plays.

- I don't know how much more trite the "Greenman" thing can get as a sports fan phenomenon, but getting two of your friends to don the costume to fill out your team's color palette is about as close to the edge as possible. 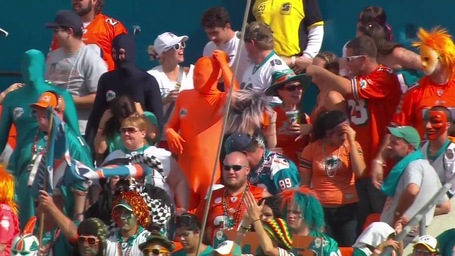 - Oh great, there's a war of words between Jay Cutler and DeAngelo Hall. After Hall tied an NFL record by picking off Cutler four times Sunday, Cutler responded by saying, "There's no reason to shy away from him. I mean, that's hard for me to say, throwing four picks at a guy, but I'd still, if we had to play them tomorrow, I'd go at him every time, if we could." Having heard that Hall claimed Cutler doesn't really understand the game of football and that Cutler was obviously going to try him having had success against Hall when the two were playing in the AFC West. Fortunately, Cutler and Hall managed to ruin their relationships with teams that were division rivals and landed instead on two NFC teams that don't play each other every year. Because, as entertaining as Hall's interceptions were yesterday, no one wants to see those two have anything to talk about that earns them attention.

- Does someone need to sit down Jeff Fisher and explain to him that his players probably shouldn't be in nightclubs? The Titans have a more checkered history of incidents in the club than any other NFL team over the last few years. There was Kenny Britt getting into an altercation over the weekend. Vince Young punched someone in the off-season. Remember, of course, that the most scandalous of Pacman Jones' club incidents happened while he was a member of the Titans. Of course, the fact that Britt responded by playing out of his mind isn't likely to spur Fisher into immediate action on that front.

- Al Michaels mentioned during the Sunday night game that Visanthe Shiancoe told them he wants his name to be pronounced "Vissant" from now on. No doubt he's envious of the overemphasis placed on Pierre Garcon's accent. Sorry, that's already one more announcer affectation than we need in the league, Shiancoe.