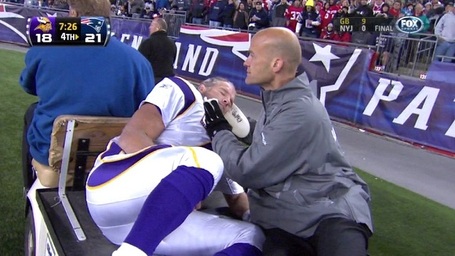 That's a screengrab of Brett Favre leaving the Gillette Stadium field on a cart, towel firmly pressed to his chin. That's apparently because, as Fox's Thom Brennaman reported, Favre's injury is a lacerated chin.

That injury would certainly explain the need for constant pressure on his chin, would seem a little less serious than a jaw injury, and certainly makes Brennaman telling viewers that Favre's return was questionable makes sense.

Favre's hand went immediately to his chin after the hit by defensive tackle Myron Pryor.

Favre would have to be a fast healer to return to the field in any case: his injury came with less than half a quarter left, and the Patriots have since tried to squash any possible comeback attempt by running out the clock. And Tarvaris Jackson has been more than capable in his two plays of relief, throwing for a touchdown and a two-point conversion.

For Favre, a chin injury would be just the latest malady to afflict him; he came into today's game with fractures in his foot.