Randy Moss Returns To The Vikings, And The Circle Of Life Is Complete

It's official: Randy Moss is a Minnesota Viking, heading back to the place where America first fell in love with him. It's refreshing. One of those moments that just feels right. Why is Randy Moss in a Vikings uniform so special? Well, it began in 1998...

Share All sharing options for: Randy Moss Returns To The Vikings, And The Circle Of Life Is Complete

There's a lot to complain about in sports. I mean, just look at sports blogs. Look at SB Nation, which CNBC called one of its "Five emerging internet companies to watch" earlier this year. Complaining about stuff has become its own industry. Complaining about arrogant players, stupid announcers, lazy columnists, bad coaches, great teams, bad teams, terrible GMs, the salary cap, parity, referees, obnoxious fans, and of course, the World Wide Leader.

We complain about everything, and to paraphrase Jay-Z, "It's a business, mannnnn."

And it can get kind of exhausting feeling superior all the time. Don't get me wrong; it feels great to be smarter than every announcer or player or coach, ever, and it's all pretty hilarious if you have the right attitude, but that's not why most of us began liking sports, and it's not what makes them fun. Sometimes, it's kind of great to just savor the moment. 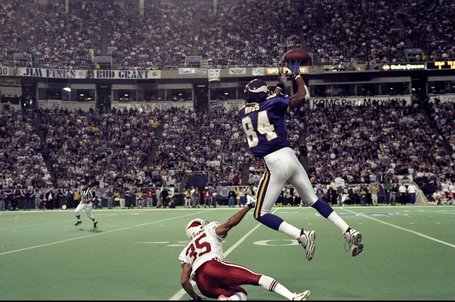 We could forsake this nostalgia and talk about the other irony here. That the relationship between Brett Favre and the Packers never fully recovered after Green Bay nixed a trade for Randy Moss, leading to a bitter divorce that ultimately led Brett to play for one of Green Bay's biggest rivals, where he would later pressure the Vikings management into a trade for Randy Moss—that's clearly what's happening here, right?

But rather than unpack all that—and ultimately conclude that Favre exerts far more influence on the football universe than any of us realize—let's just forget it.

This is about Randy coming back to 'Sota. Where it all began. Where he shattered every rookie receiving record in existence and introduced himself to the NFL as the most captivating, dominating, breathtaking receiver anyone had ever seen. Gravity-defying, too. For his rookie year in Minnesota, Moss was everything we love about sports.

We're not talking about the subsequent six seasons he spent there, because the luster began to fade after that first season. The talent didn't, but the mystique wasn't quite the same. And it's hard to transport ourselves back to that era and forget everything that's happened since, but when Randy Moss was a rookie in Minnesota, we really had no idea what he might do as an NFL player.

As his soon-to-be Hall of Fame teammate Cris Carter marveled to reporters during that first season, "Do you understand that this kid could be Michael Jordan? That we're on the ground floor of something huge?" 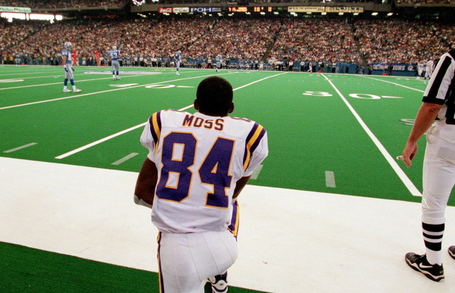 The stats pretty much speak for themselves. Totals of 1,313 yards and 17 touchdowns—a more impressive resume than any receiver in the NFL that year, last year, and most any year. By comparison, Jerry Rice had a piddling 927 yards and 3 touchdowns as a rookie in San Francisco. Moss made everyone look pedestrian.

The stats only tell part of the story. They don't show how much higher he jumped than anyone we'd ever seen in pads and cleats. They don't show how effortless he looked gliding across the Metrodome field and through some helpless opposing secondary, making world-class athletes look like they had lead in their turf shoes. The stats don't show how he rose to the occasion when the spotlight was brightest—two touchdowns on Monday night in Lambeau, three touchdowns on Thanksgiving in Dallas, a touchdown in each of the Vikings' playoff games.

Here we had this 21-year-old kid that NFL scouts had labeled a "problem child" coming out of school, and bit by bit, he won us over. First it was the Vikings and Cris Carter, who invited him to offseason workouts and found him to be surprisingly precocious. Then it was NFL defenses, who quickly realized he was the Vikings' most explosive playmaker. Then, when the fans caught on, he became a prodigy. Then the Vikings started winning, and kept winning, kept scoring, and America became completely mesmerized. The progression hit another level.

Problem Child to Precocious Rookie to Playmaker to Prodigy, and finally, to a full-on Phenomenon. That was Randy Moss over the course of nine months in Minnesota in 1998.

For some perspective, think of Dez Bryant. The Cowboys took him 24th overall in the 2010 NFL Draft, just three spots later than when the Vikings grabbed Randy Moss. Like Moss, Dez had all the highlights and all the measureables, but also just enough "character concerns" to scare off two-thirds of the NFL. When Dallas grabbed him, though, it was hailed as quite a coup. They took the talent, and best case scenario, Dez had the potential to rejuvenate the Dallas offense overnight, with enough talent to transcend the learning curve that typically greets rookie receivers. The player—and the impact—that scouts were describing was Randy Moss. So I knew enough to temper my excitement.

Don't get me wrong: Dez has been fine. But there's only one rookie Randy Moss.

Coming into the league, most expected Moss to flame out, the same way he did before he got to Notre Dame and at Florida State. He had the wrong history, the wrong attitude, even the wrong accent. But almost overnight, all those concerns disappeared, and we were all along for the ride. We suspended disbelief. He took a nation full of cynics and turned us into children. Awed by what we were seeing, no idea what we might see next. 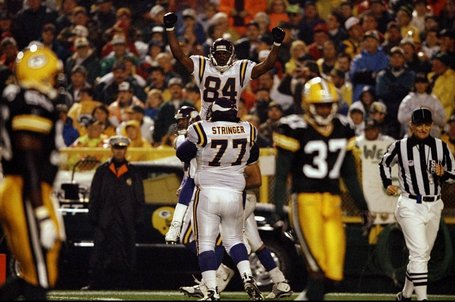 That's what I meant earlier, by "savor the moment." Sports are coolest when they turn us into kids again. I didn't write it up front, because you would have seen the cliche and stopped reading. But this stuff really happens. Every now and then, sports turns us wide-eyed, allowing us to enjoy the moment without remembering to complain and be cynical. Without contextualizing everything and finding a way to be nonplussed by it all.

Well, there was a moment in Monday Night's Patriots game where Randy Moss' problems with the Patriots crystallized. With the clock winding down in the first half, Tom Brady lined up at the 12, ostensibly to spike the ball and take one last shot at the end zone. He faked it, though, and went to Moss in the front corner of the end zone. Moss couldn't make the catch (video here).

And watching the Moss drop, I realized that Patriots fans would see that play and say to themselves, "Goddamnit, Randy!" Nobody would talk about how Moss had to stop on a dime at full speed, twist his body to catch the ball that Brady threw to his back shoulder, and then get his tiptoes in bounds. Making that catch would have been impossible for just about any receiver not named Randy Moss.

But because he's always made this stuff look so effortless, people don't say, "Wow, Moss gave us a chance to make a play there." Instead, it's "How does Moss not make that play there?" and maybe even, "Why can't we pair Welker's heart with Moss' talent?"

So we complain, because that's our go-to move these days. It's not even a bad thing, but it's important to remember. People connect with Wes Welker because he's distinctly human, and in a world of athletes supposedly squandering their talent, we look at this little waterbug making the most of his limited gifts and say, "He gets it. He's what we love about sports." Which is fine, but totally anti-climatic.

Because if we're being honest, Welker's really not that amazing of a success story; receivers his size have been finding success for generations. I don't hear anyone calling Davone Bess an "inspiration for all the little guys in life." He's just a football player, and so is Welker. But Moss has the potential to be something more—the football player that makes plays other football players can't make. The football player that can single-handedly lift an offense into a different stratosphere.

We see how hard football is for someone like Wes Welker, so it's easy to appreciate his accomplishments. But for Moss, the game looks so easy, so it's easy to ignore the impact he has on everyone else. We got so busy doing what adult sports fans do, picking apart his game and questioning his character and commitment, that we forgot to appreciate Moss for what he is—one of the greatest receivers to ever step on a football field.

Now, New England's about to find out exactly what they're losing. You think an offense geared around Welker and Julian Edelman is going to strike fear in the AFC? And they deserve to fail. The Patriots refused to take Moss' contract demands seriously and show him any loyalty whatsoever, poisoning the relationship between them, and leaving Randy no other option but to ask for a trade.

The Patriots never fully appreciated what Moss gave them the past few years. Before he got there, the Patriots identity had always revolved around defense, special teams, and scrappiness. Is it just coincidence that with Moss on the outside, Welker emerged as a deadly second option, Tom Brady became the best quarterback in football, and the Patriots became a juggernaut defined by their explosive offense? Come on.

So with Moss going back to Minnesota, it's not that crazy to think he can do something really, really special for this Vikings team. I mean, look at how terrible Matt Cassel has looked for the Chiefs—if Moss could make Cassel look good for an entire season, he'll probably find a way to make Brett Favre look decent. He hasn't played with a solid running game since his first few years in Minnesota, so having Adrian Peterson around should do wonders for freeing up Moss over the top. And if Moss' presence shot Welker into the Pro Bowl, imagine what Percy Harvin might do.

So here we are again. Moss coming into Minnesota surrounded by questions from people like Peter King, poised to become the ingredient that takes a good offense and turns it into something truly terrifying. If it happens that way, it'd be a pretty spectacular way to close out his career. The circle of life is complete. For Moss, yeah; but us, too.

With the team that first made him famous, on an offense that should be pretty terrifying, back in purple, back on turf... Something tells me it won't be long before Moss captures our imagination all over again.

He turned us to children, then we became cynics, and now, the best receiver in a generation is returning to the place where we first fell in love with him. I'm awed by what we're seeing, and have no idea what we'll see next. And yeah, who knows whether Moss will make all the catches the Vikings need. But say this much: It will be a lot fun to watch. How can we complain about that? 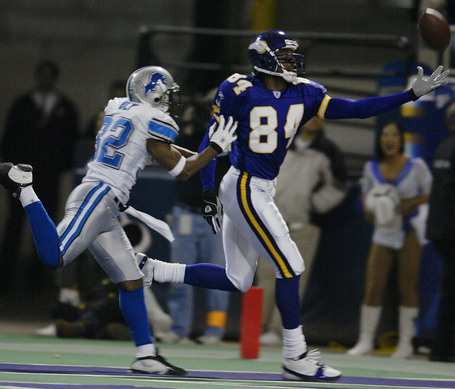