Michael Vick Is Finally What We Dreamed, And The Philadelphia Eagles Are A Nightmare

Against the Washington Redskins Monday night, Michael Vick ran like we always knew he could, and threw the way we always dreamed. His talent was a fairy tale, a cautionary tale, and now... Michael Vick's Future is finally our present.

Share All sharing options for: Michael Vick Is Finally What We Dreamed, And The Philadelphia Eagles Are A Nightmare

Michael Vick has never played better. Against the Washington Redskins Monday night, on national television, Vick removed all doubt. And what's been whispered as a question for the first half of the 2010 season—could Michael Vick be better than ever at this point?—is now, officially, a statement.

"I've had some great games in my day," Vick said, "but I don't think I've one quite like this one."

But Vick's Monday wasn't just a revelation by his standards. However you want to measure it, that game was among the best performances by any quarterback, ever. 20-28 for 333 yards and four touchdowns, along with 80 yards rushing and two more scores on the ground. From start to finish, he was on a different level. Literally, from the very first play. He walked out to the his own 12-yardline, and then...

Move the pocket to avoid the rush? ... Easy.

88-yard touchdown to open a division game on the road? ... Why not?

After all these years, Michael Vick is making it look easier than ever.

It hasn't always been this way, of course. Michael Vick entered the league with more hype than any quarterback we've seen before or since. He was supposed to be a living, breathing video game. The player with maximum speed and maximum arm strength that kids create in video games, just out of curiosity. He was going to be Steve Young with more speed, and an extra pinch of Hip-Hop.

But soon enough, people came to resent him for it. We picked holes in his game, questioned his character and commitment, and wondered whether he "had what it takes." People forget this now, but even before Vick found himself on trial for dogfighting, most of the football establishment had written him off as fool's gold. He had more physical tools than seemed fair, but in the end, none of it mattered. He didn't have "what it takes."

And those critics were right.

But still, when we talk about Michael Vick, you have to understand just how much skepticism he's faced over the course of his career. It makes his redemption that much sweeter.

When Rush Limbaugh talked of Vick's opponent last night, Donovan McNabb, he caused a firestorm when he suggested that a majority of the media overlooked flaws in McNabb's game because he was a black quarterback, and the media had some bizarre, vested interest in his success. And regardless of what you think of Limbaugh's sentiment, it's not crazy to look at McNabb as the favored son next to Vick.

If McNabb's shortcomings as an NFL quarterback were explained away or overlooked altogether, the pendulum swung the other direction with Vick. Even before the dogfighting scandal, the resentment ran deep. And after Vick revealed himself to be everything his critics ever alleged, and worse, his fate was sealed. The guy that was supposed to change the way we thought about quarterbacks had changed the way we thought about athletes. With Vick's dogfighting scandal, all the people critical of athletes over the years suddenly had new ammunition.

"Remember Michael Vick?" they could say now. "We were right about that one..."

Vick's Quarterback Revolution hailed by Sports Illustrated in 1999 would not be televised. Less than a decade after it began, the revolution was imprisoned, and the resentment, justified. 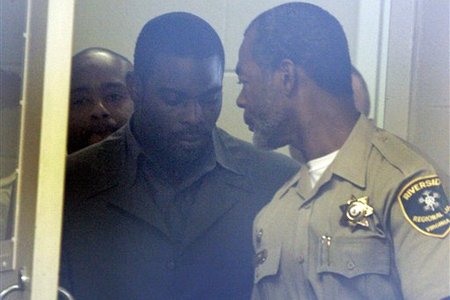 But then, there he was earlier this season, when the redemption began and I wrote an article called Michael Vick is The American Dream. If you want to read more about where we've been with Vick and dogfighting and hype and criticism—and how that shapes Vick now—then click here.

But this is about Monday night, when we found out for sure that Vick is really, seriously better than ever. There's no hype this time, and finally, it's all real. It was McNabb, not Vick, that signed the cartoonishly fat contract. Vick's playing for around $5 million this season. Nike supplied him with free shoes for this season, but refused to offer an endorsement deal.

None of it matters though, because Vick has finally delivered on the promise, and all those peripheral benefits will arrive in due time. For now, it's just amazing—and still a little surreal—to hear announcers gush over Vick the way we once expected they would.

"He could be the player of the year," Jon Gruden said during Monday's broadcast.

As Gruden screeched a little later, "Somebody give me his autograph!"

These are exactly the sort of people who just a few years ago would have told you that Vick probably didn't have what it takes to be a winner in the NFL. But that's the point. He didn't, and now he does.

He's the player we expected coming out of Virginia Tech. "Michael Vick is the future," said an NFL scout describing him in 1999. "His ability ... won't just beat defenses. It will demoralize them."

Did you see the Redskins last night? Didn't they look demoralized?

It took one of the more spectacular humiliations we've ever seen in sports, but the prodigy is finally realizing his potential, the likes of which we've never seen in sports. Vick's future is finally our present. Steve Young, but faster and with a stronger arm. Two years ago, we felt naive for ever suggesting that could be possible. Monday night, the comparison felt understated.

Thinking back to everywhere we've been with Michael Vick, you can embrace the symbolism of it all—where Vick's past confirmed our worst fears of athletes' devolved nature, his redemption speaks to a much broader truth about the human capacity to evolve. Or you could simply take it at face value—he's a football player with insane natural talent that learned how to harness it, and he's the most exciting football player on earth.

Either way, hearing Steve Young stammer on ESPN when asked to describe Vick's performance, you can't help but appreciate the story here. We've come full circle. After a few seconds of silence and then some garbled words, Steve Young said softly, "This is what a quarterback can be."

He was in disbelief. Just like the rest of us. With Michael Vick, we've graduated from fairy tale, to cautionary tale, and finally, to something that's real. It's better than any story we could have imagined for him, and at least for now, it still feels like a dream that's too good to be true.

You know, unless you happen to be playing the Eagles in 2010. 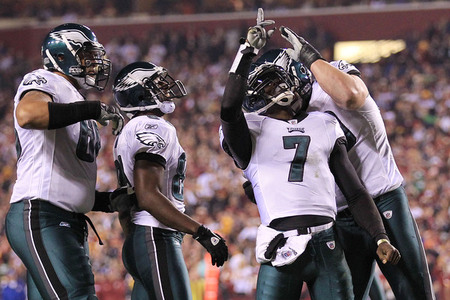