Where else in life would this happen? Laron Landry, an overrated ball of testosterone and mediocrity, apparently spent much of the warmups before Monday's Eagles-Redskins game taunting Desean Jackson and his teammates. According to the Eagles, he spit on them, and that was just the beginning. As Jeremy Maclin explains:

"There’s just certain things that you talk about and certain things that you don’t. In incidents when somebody is really hurt – just life-changing incidents like that – you just don’t joke about those types of things. Thirty was running off at the mouth a little too much. He’s supposed to be one of the elite players in the league, but there are certain boundaries that you don’t cross, and he definitely crossed them."

See, if that happened in real life, he would just be a typical a**hole, and the Eagles would have to either turn the other cheek, or risk looking classless themselves. But in sports, not only is it acceptable to make a point of humiliating someone like Laron Landry, it's encouraged.

So about a few minutes after ESPN showed Landry jawing with Jackson, there was that 88-yard TD on the first play. It spawned the photo after the jump, which neatly encapsulates the entire dispute. 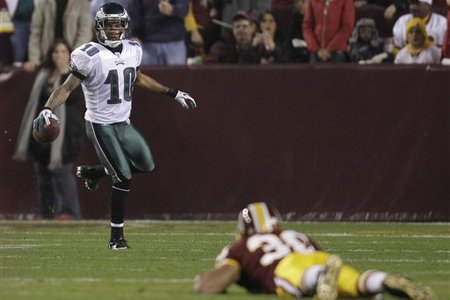 Oh, and there was also this. Desean Jackson's explanation for the fast start:

"We came back in the locker room pumped up. We’re like pit bulls ready to get out of the cage. So I think it helped out a lot. They came into our house and put a pretty good whooping on us, so we just wanted to return that."

So yes, add "quotes too good to make up" to the equation, and you get the idea. Sports are awesome in ways that just don't exist in the rest of culture. But really, my favorite part about this whole thing was Landry getting exposed. His obnoxious swagger and oversized biceps have overshadowed obvious deficiencies for way, way too long. He's a weirder, more insufferable version of Roy Williams, the safety. And he's about as consistent as Roy Williams, the receiver. Guess who was spying Michael Vick as he had one of the best games we've ever seen from the quarterback position.

Hint: earlier this season, our Redskins blog mentioned him as a player of the year candidate.

Then again, sports has a way of exposing the frauds. That's why we love this stuff, ya know?