Moss Hysteria! The Vikings Cut Randy Moss, And We All Ask What Went Wrong

The Minnesota Vikings shocked the sports world Monday when they cut ties with the superstar they'd acquired just four weeks earlier. And just like that, Randy Moss is an outcast again, and the rest of us are left to ask, "what is Randy Moss' problem?"

Share All sharing options for: Moss Hysteria! The Vikings Cut Randy Moss, And We All Ask What Went Wrong

The news that Randy Moss has been cut from the Minnesota Vikings shocked everyone. Even the most jaded Randy Moss cynics didn't think his return to Minnesota would end like this. For things to deteriorate this quickly, something had to be seriously wrong.

Right? That's the only explanation here. And it's led a lot of folks to turn to Moss' post-game press conference in New England for answers. So let's begin there.

He got emotional, he hemmed and hawed, and he made a point to thank all the former teammates that he encountered on what was obviously a day full of complicated emotions. He talked about meeting Deion Branch, his replacement, and called it "a pleasure." He talked about the memories in New England. And he said of his ex-teammates, "You know, I just want to be able to tell the guys, I miss the hell out of them. Every last helmet in that locker room. Coach Belichick, he gave me the opportunity to be part of something special. That's something I really take to heart."

And when he went on to talk about the day's game, he vented a little bit. He said that it was frustrating to work all week, try to explain to Vikings coaches what the Patriots do, and then have his advice go ignored on Sunday. It was a moment of frustration, boiled over in front of the cameras.

Then, we KILLED him for it.

I spent Sunday night offline and watching HBO, so I didn't hear about the press conference until Monday morning, when Bomani Jones mentioned Moss' "meltdown." Yahoo! Sports called it "surreal." A Minneapolis paper wrote headlines about Moss "ripping" his team. And on and on. The reaction was near-universal—another case of Moss' cancerous tendencies come to light.

The news of his release came to obscure the incident—a petty press conference pales next to the spectacle created by Moss' sudden dismissal—but maybe it shouldn't have.

The story is that press conference. Had another player said exactly the same thing as Moss did on Sunday, it's not a story. Or, not an overwhelmingly negative story. That's his biggest problem, though. Whatever Randy Moss does, it just always seem to come off in the worst way possible. 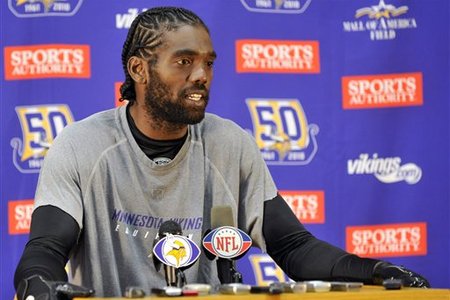 That's Brett Favre, speaking after a game last year in which he got into an argument with Vikings coach Brad Childress on the sidelines. But when someone like Favre questions his coach in front of everyone, we say, "This game is an emotional game, particularly when you're right in the middle of it." Brad Childress said that, actually.

But Moss is different. If another player had complimented his former teammates and expressed nostalgia for his days with the Patriots, we'd have called it an emotional, heartwarming display. If another player passive-aggressively questions the coaching staff the way Moss did Sunday, we chalk it up to emotions of the game.

So why is Randy Moss so different? Why, when Randy Moss draws a pass-interference penalty, trips, and appears to give up on a potential touchdown, why do we blame him for Brett Favre's injury? When Brett Favre throws a game-ending interception against the Jets, why do people write headlines asking whether Moss cost the Vikings a win? And when he said this about the New England Patriots back in September:

Even after teammates defended his remarks, why did we hear hometown columnists compare him to Courtney Love and Tom Cruise?

It would be overstating things to claim that we’ve never heard or seen anything like this before. We have, after all, seen Tom Cruise jumping on Oprah’s couch, and there was the night in Miami when Billy Sullivan yanked coach Chuck Fairbanks off the field before the start of a game. We watched Roger Clemens set himself on fire in Oakland and Don Zimmer make a bull rush for Pedro Martinez.

But as meltdowns go, this was one of the best. Think of it as Courtney Love meets Oil Can Boyd.

And of course, there was loving nod to the Hero that Moss upstaged at the end: "Team Guy Welker disappeared for the final minutes of Me Guy Moss. When Moss finished, Welker returned to take questions from reporters who lingered." Me Guy Moss. Of course.

Yep, that's been the story of Randy Moss, greatest receiver of his generation. Where his peers are championed for doing and saying similar things, we chastise Moss. Call me an apologist, but the facts don't lie. The quotes—and the columns in response—are all on the record.

And if we look at the record, we don't see many columns surrounding Team Guy Moss. As if Patriots veteran Fred Taylor never said of Moss, "You can't question a man's integrity when it's from his heart." As if Patriots second-year star Darius Butler never said, "He's one of the best teammates I've got." As if the White Knight himself, Wes Welker, didn't say, "There's really nobody that can do what Randy does. It's pretty much unheard of. So, he's a great player and a great teammate and I'm glad he's on our team." As if an anonymous NFL player didn't hear this week's news from afar and observe the following:

Look at the tape. Look at the coverages. Look at what he does for everybody else. Percy [Harvin] is running free all over the field right now. The running game is moving along. I don’t even care about the fact that he’s smarter than everybody on the coaching staff. He’s a game-changer.

If you think I'm here to defend Moss and everything he's done over his career, you're wrong. But it's okay to wonder, isn't it? Why don't we ever hear about Team Guy Moss? All he's done is speak from the heart, make his teammates better, and... Get vilified for it. Over and over. Where others would be worshiped, Moss gets scorned. 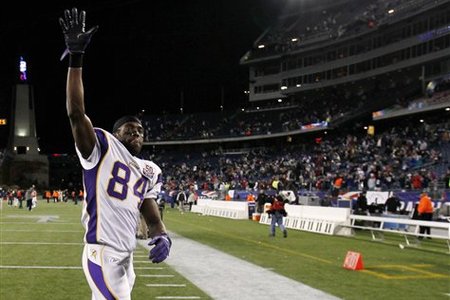 It's sad. I'd hoped that Moss' return to the Vikings would break the cycle and complete it at the same time, but now that dream is dead, and Moss' legacy is mired in more confusion than ever. And while everyone in the NFL scrambles to piece together what may have prompted such a drastic end in Minnesota, this anecdote has gained a lot of traction (via Yahoo! Sports):

As is the team’s custom on Fridays, a local food establishment was invited to the training facility to serve a catered, post-practice meal in the locker room. ... As the proprietors helped serve chicken, ribs, pasta and other dishes to Vikings players, Moss paced up and down the serving line and loudly expressed his displeasure with the offerings.

According to one player who witnessed the scene, Moss yelled, "What the [expletive]? Who ordered this crap? I wouldn’t feed this to my dog!"

Said the witness: "It was brutal. The truth is, he deserved to be cut after that."

And maybe that's what did it. But think back to the press conference Sunday, and the way the world interpreted Randy Moss that day. Or think back to September, when the guy Wes Welker called a "great player and a great teammate" was called "Courtney Love meets Oil Can Boyd." Or... Think back to his whole career, really.

I'm not saying the Moss-berates-small-town-caterers anecdote is entirely made up. But if the whole thing got twisted into a tale painting Moss as the heartless, gutless villain... Well, it wouldn't be the first time.

And if Brad Childress—a hapless, spineless head coach spiraling into a demise entirely of his own making—felt challenged by Moss' unflinching honesty on Sunday and lashed out after getting walked over by Brett Favre for the past two seasons, well, that wouldn't surprise me, either. After all, Moss has always been a wide-open target, just waiting for someone to take a shot.

Meanwhile, Brett Favre reminds everyone how much he's not complaining, and announcers praise his toughness while he adds to his cartoonish streak of consecutive games:

"I got hit very hard. It was sore. And bleeding. I don’t want to make a big deal out of it."

"From the physical side of it, though, I really can’t complain … [though] I probably should. Playing with a broken foot. Eight stitches in my chin. Battling tendinitis."

Does it hurt the team when someone plays through injuries that should put him on the sidelines? How come nobody asks those questions? I guess, in 2010, there's no middle ground between Team and Me. But Randy Moss is okay with it. "I guess that people just don't like the way that I carry myself," he said back in September. "If that's what it is, then that's what it is."

But you have to wonder... Is that really a problem with Randy Moss?