Have You Ever Imagined A World Without Annoying NFL Announcers?

Share All sharing options for: Have You Ever Imagined A World Without Annoying NFL Announcers?

On the Saturday after Thanksgiving, the NFL Network will broadcast a game without announcers. It will be a taped, packaged version of the Bengals-Jets from two days earlier. It will also be the first step to brighter tomorrow. Let's take a second to breathe it in.

No more Joe Buck. No more Tony Siragusa. No more Phil Simms. No Cris Collinsworth explaining what's wrong with Michael Vick and that the Eagles listen to too much hip-hop music. No more Matt Millen and Joe Theismann one-upping each other's inane rambling. NO MORE JON GRUDEN. 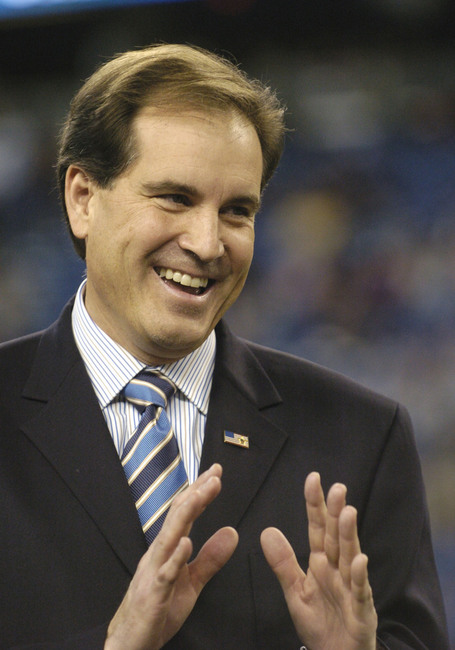 Jim Nantz probably thinks this is a horrible idea, and that is precisely why it's the best idea ever.

There's nothing wrong with punditry, but somewhere along the line, we reached a tipping point in sports where announcers became part of the game, and part of how we understand sports. This would be just fine if everyone were exactly like Gus Johnson, and announcers existed solely to extract every bit of excitement from whatever they happen to be covering. But that's not always true.

For every Gus Johnson, there are five guys who exist solely to pontificate and moralize and prattle on about film study or practice habits or footwork or what they learned from their fifteen minute talk with the coaches or ... You name it, some NFL announcer has probably bored you to death with it.

This is why the NFL Network might just have stumbled onto the best idea of all time. When the Bengals and Jets play on Thanksgiving night, 15 players and coaches will be miked up, and 48 hours later, NFL Films will broadcast the game on Saturday with only the audio from the players and coaches. Like Hard Knocks, but in a real, regular season game. Steve Sabol, NFL Films mastermind and proprietor of the coolest job in the universe, explains:

"We’ve got 15 players and coaches miked during the game, including both coaches and all the coordinators and quarterbacks and middle linebackers. We’ll have 60 people shooting the game, which is more than we use for a Super Bowl, and then we’ll turn it around in 48 hours and show it to you through the eyes of the players. It’s something you won’t see anywhere else."

And make no mistake: it's the first step to something much bigger. Something bolder.

Back in college, my TV was messed up, and for every NFL game on FOX, you could only hear noise from the field and the crowds, and the announcers were muted and/or in Spanish, depending on the day. This may sound terrible, but it became my favorite thing about the TV. No offense to the guys that do it professionally, but watching a game without announcers is pretty much the epitome of serenity.

And while NFL Films is looking at this Bengals-Jets game as a way to bring fans a new reality, shedding light on the the true sounds of the NFL, here's to hoping it sheds light on another truth.

At this point, announcers do more harm than good, and if networks would just broadcast the games with only crowd noise and signals and maybe a few players miked up, fans would absolutely LOVE it. Like some of the games in the 1980s, except we all love football a thousand times more this time around, and we don't need anyone to explain the cover-2 defense to us.

So Saturday night, don't freak out. There's nothing wrong with your TV. Coming through on NFL Network, it'll be no glitch or accident. It's the future. Until then... Well, nobody tell Nantz.