Wade Phillips Needs To Be Fired By The Dallas Cowboys; Because It's Starting To Get Awkward

Share All sharing options for: Wade Phillips Needs To Be Fired By The Dallas Cowboys; Because It's Starting To Get Awkward

Remember: Wade Phillips has been a lame duck head coach since the day he arrived in Dallas. If Jerry Jones could have hired Jason Garret as the head coach, he would have.

Back in September, I talked to a retired NFL player about the Cowboys, and he placed the blame on the ownership. "[Jerry] created this when he paid Jason Garrett head coach money. Because that was the guy that Jerry wanted all along. Jason Garrett's making $3 million. And yeah, Wade got a raise so that he made just a little bit more. But how is he supposed to call it his team when the owner obviously supports the other guy?"

"Jerry says to Wade, 'Oh you just go coach the defense.' But nah, that's not how it works."

And, um, did you happen to see last night's disaster in Green Bay? It's not working. 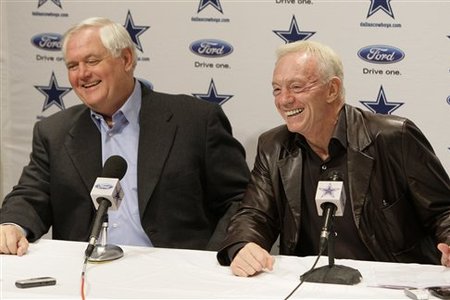 HA-HA-HA EVERYONE'S SMILING AND THE COWBOYS ARE THE MOST PATHETIC TEAM IN THE LEAGUE ISN'T THAT HILARIOUS? ... God ... Can Jerry Jones please do something?

Maybe we're overreacting, maybe we're spoiled. There are plenty of teams that have been this bad for much longer than what we're experiencing. So if you want to call us out on that, feel free to do it, you'd be right. But ... there's no reason for Wade to continue coaching this team.

The Green Bay Packers toyed with the Cowboys. The Jacksonville Jaguars did the same a week ago. They didn't just beat the Cowboys, they humiliated them. 1-7. The 2010 Dallas Cowboys have imploded.

It never feels good to actively call for someone else to get fired. It's petty, and it takes an inevitably nuanced situation with myriad problems and turns one man into the scapegoat for everything. That's certainly the case this year in Dallas; whatever's gone wrong, it's not all Wade's fault.

And Jason Garrett won't be the solution, either. Without going into his problems as an offensive coordinator, the same player I talked to in September had this to say about Garrett:

"I played with Jason, and he's a good guy. But once a guy snaps on him, Jason will be done with it. He'll go out of his way to avoid a player. Won't talk to 'em, won't make eye contact... Guys in this league have a hard time respecting that."

So with Wade Phillips reeling, we should make it completely clear: this isn't all his fault.

But he still needs to go, and you can choose your metaphor here. Maybe he's a CEO that's overseen the dramatic collapse of a Fortune 500 company, a humiliated lightning rod for criticism, just waiting for the board of directors to vote him out at the end of the year. Or maybe he's an animal, whimpering softly by the side of the road, waiting to be put out of his misery. Or perhaps he's the boyfriend that knows things aren't working, just waiting to have "The Talk" where his worst fears are confirmed and he finds out things are over for good. Then, both sides start over.

However you want to look at it, though, all of those scenarios favor firing Wade now. Clearly, after the Dallas Cowboys somehow found a new way to humiliate themselves on national TV last night, anything would be an improvement for this year's Cowboys. But it would also be the best thing for Wade Phillips.

Say what you want about him, but he's a good coach who's done his best in a difficult situation the past few years in Dallas. He deserves the courtesy of being sent on his way before things devolve further and the humiliation gets even more spectacular.

This past week I predicted Sunday night's debacle, asking rhetorically, "What will it take for Jerry Jones to fire Wade Phillips? Would a 30-point loss on National Television do the trick?"

Ah, but Sunday night's loss turned out to be 38 points, technically.

And as the exasperation from everyone gets more exaggerated, Wade Phillips remains the head coach of the most pathetic team in the NFL, technically. 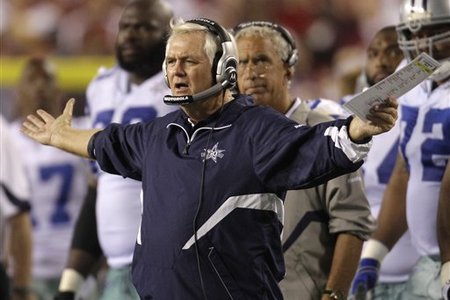 So what will take it for Jerry Jones to finally make a change?