Boise State's Kyle Brotzman has become a celebrity, and when a kicker becomes a celebrity, it's normally for the wrong reasons. We can hate kickers, and we can laugh at them, but let's first recognize that we love them.

Kicking is the most curious profession in sports, one reason being that kickers are so oddly and specifically typecast. Most football players are recognized, or at least noticed, in street clothes, whether by virtue of their height, muscles, or fat. Kickers generally aren't. At least, Jon Hilbert wasn't.

It was a Sunday in 2003, and I was working a shift at Radio Shack. (A lot of my anecdotes start this way. Apologies.) My general routine on Sunday, the day of the week I ran the store, was to unlock the doors, turn on the lights, climb behind the televisions to re-connect the DirecTV we were not supposed to be watching, switch to Sunday Ticket, and pray that nobody was selfish or thoughtless enough to walk into the store while I was trying to watch football.

When a person did walk in the door, I managed to internalize my annoyance for long enough to greet him, and I was relieved upon learning that he simply wanted to watch football while his friend shopped on the other side of the mall. So we stood there for a few minutes, making conversation about the Cowboys game we were watching.

He didn't make a point of bringing it up, but the subject turned to kicking, and he said, "I used to kick for a while."

"Oh yeah?" I assumed he meant high school, or perhaps some small college program. "You go to school around here?"

"For the Cowboys, actually." 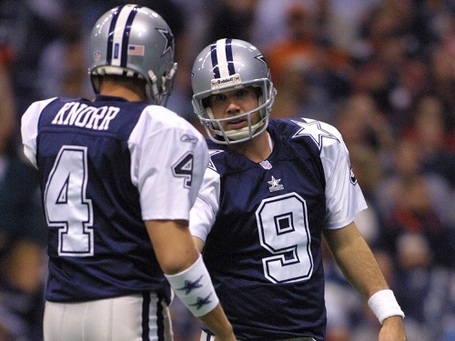 He fell silent as we watched Billy Cundiff kick a short field goal through the uprights, then returned to conversation. We continued to talk about football, but he didn't attempt to offer an authoritative or experienced perspective on the matter. We simply stood in the middle of the store, speaking like common fans. After he left, I Google-stalked him and found that he had kicked in the NFL only one season prior.

I was surprised, but I shouldn't have been. There have been a few mainstays in the kicking profession, but aside from the likes of Morten Andersen and Jason Elam, the kicking industry is home to a workforce as transient as the restaurant industry. Hilbert, during his year with the Cowboys, was perfect within 40 yards, but was only 2-for-7 from a greater distance. He secured a second chance with the Panthers in 2002, missed two field goal attempts, and left the NFL forever.

My surprise turned to indignation. As far as I could tell, Jon Hilbert's career was over because he had 18 chances and failed to deliver on seven of them. Seven! That's it! He screwed up for a cumulative 35 seconds of his life, and now he's going to... I don't know, start a dental practice?

He seemed like such a nice guy, I thought, and my next thought was one of dark bemusement: an NFL player was transitioning to an average American life, my life, and I was offering the sort of nicety one hears at a funeral parlor.

Once in a while, you'll hear someone bemoan the kicker's role in the NFL. The most common line is that it's improper for a game to play host to a supernatural carnival of huge men, strong arms, and blinding speed, only to ultimately be decided by a relatively little fellow with an odd-looking face mask who plays golf with his foot. George Will, as part of a defense of baseball, said this:

Football combines the two worst features of modern American life. It’s violence punctuated by committee meetings. In addition, football represents the manic division of labor that makes life confusing and, I should think, unsatisfying. I mean, who wants to grow up and be a third-and-long-yardage pulling guard?

Clearly, we're looking at the same painting and seeing a different picture. Football is fascinating in part because it truthfully reflects the division of labor present in American life and shapes it into something exciting. There is beauty, sure, in a slick-fielding shortstop who also hits 35 home runs.

But there is a different-but-equal sort of beauty in the diversity of football. The likes of Deion Sanders and Kordell Stewart excluded, every football player rolls through a 15-year-long assembly line, during which it is decided whether he will be a long-snapper, a quarterback, a cornerback, a kicker. He has been specifically conditioned for a very specialized trade, and so we're treated to this wonderful spectacle of watching a physically modest man in the company of giants.

Now, when this one-trick player has to work outside of his job description, it becomes a different kind of wonderful. This is the greatest play in the history of football.

Garo Yepremian, the kicker for the undefeated 1972 Dolphins, could have simply fallen on the ball. Instead, he proceeded to demonstrate his profound inability to perform two of football's most simple tasks: throwing a football, and catching a football. 90 percent of the crowd was surely capable of doing something that Yepremian could not. Moments such as these still happen once in a while, and they helpfully serve to remind us that despite the sober, serious, businesslike appearance projected by NFL Films, Madden intro sequences, and most of the media, football is f***in' crazy.

This has all been a wandering, roundabout means of getting to Kyle Brotzman, the Boise State kicker who, on Friday, quite possibly committed the most historically significant missed field goal that football has ever seen.

Minutes later, Brotzman would miss a second field goal in overtime that gave the first a run for its money, but we ought to focus on the first, in part because it immediately followed a hugely unlikely long pass to set it up. It was a two-inch different between a win and a loss, a 24-game winning streak and a one-game losing streak, a few more steps on the march to alter the politics of college football and a comfortable return to what passes for normalcy.

A 26-yard field goal is pretty easy to make. I never played organized football, but I made one swhen I was 12. Then again, I wasn't ten feet away from a line of 270-pound men who, given the opportunity, would leave me with such devastating injury that I'd have to spend a year drinking through my nose and listening through my mouth. That plays a factor, and Brotzman was surely also influenced, to some degree or another, by the screaming Nevada fans and the massive implications at stake.

And that's about as far as we can deconstruct the matter before we start talking out of our asses. That's a beautiful, terrible quality about kickers and kicking: they're working in transparent solitude. If the snap is bad, or the wind is hostile, we'll know it. If the few things that need to go right go right, then regarding the distribution of responsibility, there is no margin for confusion. There is no, "well, the other team exposed a weakness." In these instances, the game of football briefly morphs into a one-man struggle. There is no opponent. It's Skee ball.

This is why, in football, the goats are nearly always kickers. Scott Norwood's game-losing miss for the Bills in Super Bowl XXV is the most familiar example, but I'm fairly certain that every team has employed a Scott Norwood at some point or another. The Chiefs, for example, have Lin Elliott, who helped ensure the end of a 13-3 season by missing three make-able field goals in a 10-7 postseason loss.

Even Gary Anderson, who held the career field goals record for several years, is not immune. His most well-known moment is probably a 38-yard miss in a 1998 playoff game that opened the door for the Falcons to come back and win, sending the 15-1 Vikings home for the winter.

If you are a kicker, your objective is to kick field goals, but often your purpose is to be hated. If a team loses, its fans want to hate, and it's far more devastating to hate something or somebody in particular. According to the New Jersey Star-Ledger's Jerry Izenberg, the fans aren't alone.

Placekickers. The most hated, reviled football players at all when it comes to other football players. They come out, clean shirt, everybody has got blood coming out of their nostrils, mud on their shirts. [...] Sam Huff once said, "the only way to stop this trend is to either tighten immigration, or two twist their leg when you get to them."

For every Garrett Hartley we celebrate, there are ten Kyle Brotzmen whose failures we delight in, or, depending on where our allegiances lie, who serve as the targets of our hatred. This is the relationship that kickers have with the world. Their intended function is irrelevant; this is their actual function, and it's a passive one: to be hated. Perhaps Brotzman is just now learning this, or perhaps he already understood.

My sentiment regarding Brotzman himself is pretty boring: his misses were a real bummer, he messed up bad, and I hope he gets over it. This, rather, is a plea to respect the kicker, successful or otherwise, as an indispensable, vital element of football. Kicking is not an aberration from the spirit of football, it is an element inseparable from football. Kicking is a binary endeavor -- there's only a make or a miss, so it's only ever at its best or worst. And whether it's at its best or worst, it's a strange, noble, and wonderful profession.

Mr. Akers, he says, once bench-pressed a student for laughs, and occasionally he'd toss a football around. He had recently finished as kicker at the University of Louisville, where he had kicked a school-record 36 field goals. His students knew that he was planning to try out for a spot in the NFL, and they made him agree that he would offer a shout-out to Westport Middle School on national television if he ever won a Super Bowl.

Well, he was close. David Akers didn't get an opportunity to attempt a field goal, and the Eagles lost by three points. 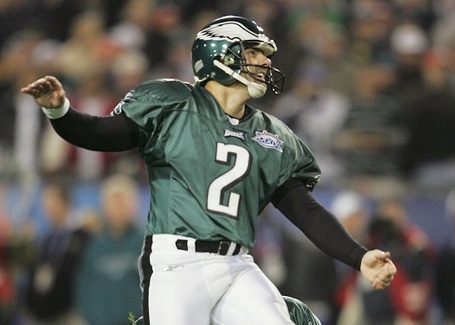 Relatively speaking, kickers are physically ordinary, and their careers are normally so unstable that many of them are familiar with the life of the common man. Of all the men on the football field, they look and live the most like we do. Hating them is as acceptable and normal as hating a heel in professional wrestling. You don't have to hate them, of course; you can appreciate them however you like.

Just so long as you appreciate them.