Chart: The NFC West Is All Kinds Of Horrible

Share All sharing options for: Chart: The NFC West Is All Kinds Of Horrible

Our Eagles blog, Bleeding Green Nation, has taken the liberty of adding up each NFL division's cumulative point differentials (points scored minus points allowed) this season. Nothing too crazy, as the divisions range from -8 (AFC South) to +79 (NFC North)... until you get to the NFC West, who already stand at -247 this year.

That means they're on pace to finish at an unbelievable -358 for the year, which is absurdly disproportionate with the rest of the league. But here's the thing: the NFC West has been this kind of horribawful for just about as long as it's existed in its present form. Take a look at the chart: 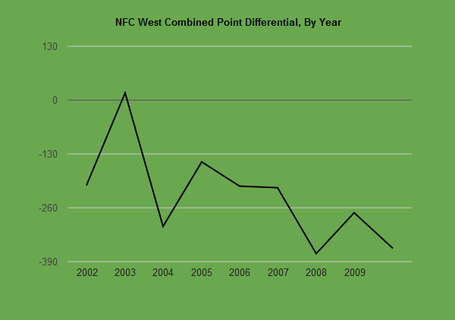 The NFC West was whittled down to its present form when the Atlanta Falcons left after the 2001 season. One would expect for a division to hover somewhere near zero, but apart from a respectable 2003, this team has been miles off. It takes a special grade of awfulness to put up numbers so consistently.

This, in a morbid way, is fun to watch. Hey, who was the last team to win a division with a losing record? Give up? So is the NFC West! BOOM!