When the Metrodome roof collapsed this morning as a result of heavy snowfall in the Twin Cities, it produced a low-grade winter wonderland on Mall of America Field. 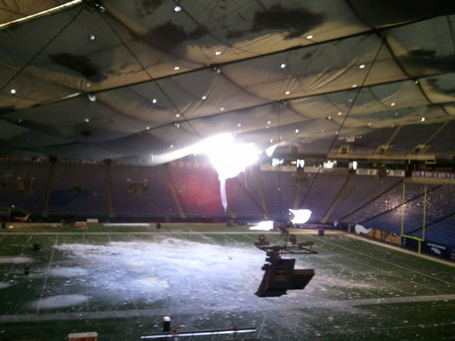 In case you were wondering why today's Vikings-Giants game is being postponed and moved — likely to Detroit's Ford Field — there's your reason, in the format of a picture worth a thousand words from radio host Peter Burns.

Obviously, the snow on the field might actually be something that can get cleared in a timely fashion for a game that would start at noon central time; the hole in the roof makes the likelihood of more snow falling to the turf almost a certainty, and that's a safety issue.

Alas, we won't get to see the old gunslinger Brett Favre having fun like a kid out there in a dome stadium on a snowy field, making all of our Frosty the Snowman jokes about his arms made of twigs a little less potent. Rats.