NFL Playoff Picture: Charts And Graphs Indicate That Your Team Will Probably Lose

Is 9-7 good enough to reach the playoffs? Do top seeds have an easier strength of schedule? Does point differential matter? Here is a series of fancy charts which may or may not convince you to hate the postseason.

Share All sharing options for: NFL Playoff Picture: Charts And Graphs Indicate That Your Team Will Probably Lose

You may already know whether your NFL team is headed for the playoffs. If you don't, you'll find out within three weeks what your January football viewing experience will be like:

You'd be forgiven for not jumping on board with my postseason fatalism, but it just may be possible that you'll have more fun if your team misses the playoffs entirely. Regardless, the final weeks of the regular season can still be fun, especially if your team is on the bubble. 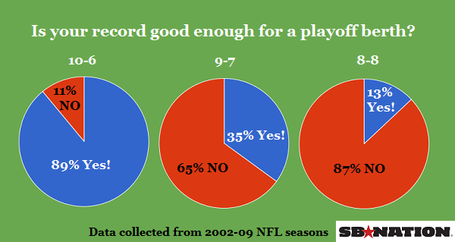 I crunched these numbers with data I gathered from all NFL seasons since 2002, when the current four-division format took place. As you can see here, a 10-6 record isn't a guarantee of reaching the playoffs, but it's a Hell of a lot safer than 9-7. That single-game 54 percent jump in probability is pretty enormous, and with a sample size of only 16 games, a playoff berth can rest on a single interception or shanked field goal. Football is cruel and emotionally manipulative and you would stop watching it you knew what was good for you.

But you don't, so here's another damn chart.

Now of course, this problem isn't exclusive to the NFL. If we wanted a completely fair playoff system, we would abolish conferences and divisions and simply throw the league's 12 best teams into the postseason. That would be sort of boring, though, since it would de-emphasize rivalries and result in more playoff spots determined by tie-breakers rather than raw win-loss records.

That's what the current divisional format is. We have sacrificed some measure of fairness and reason in favor of an equal measure of disproportionate, wonky insanity, and we implicitly deem it worth the cost of 10 percent of deserving teams losing out. We are all crazy. Here is another chart! 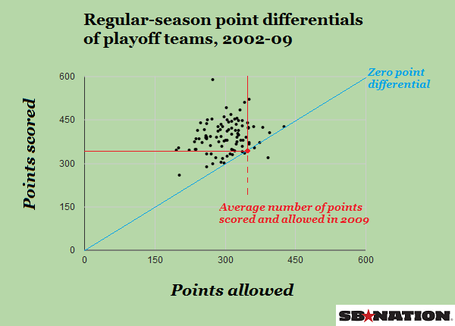 This chart, which deals with point differentials, is a little more complicated, so here's a brief explanation: I plotted the point differential (points scored - points allowed) of all 96 teams to reach the playoffs since 2002. For example, that dot all by itself at the top represents the undefeated 2007 Patriots, who scored an obscenely high number of points while not allowing too many points from their opponents.

One thing to take away from this data, though, is this: teams with significantly below-average offenses and above-average defenses have tended to enter the playoffs a little more often than in the reverse case. In case you're wondering, I unfortunately cannot remember which team is represented by that dot well under the point differential, but I'd bet a dollar that it was an NFC West team. The next chart represents how much of a snarky jerkhole I am. Just kidding! 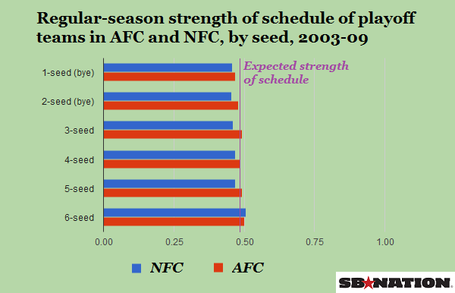 A little variance is to be expected, as a 1-seed accounts for a few more wins than a 6-seed, bow how many more wins? Five, maybe, out of the 256 wins in an NFL season? The NFC 1-seed enjoys a .459 SoS, while the NFC 6-seed faces a .508 SoS. At least we can say that the effect is less dramatic in the AFC, but it seems apparent that in one conference, at least, teams owe some measure of credit to the teams they happen to play.

Now, an examination of whether a team's regular season record indicates how far they will advance in the playoffs. 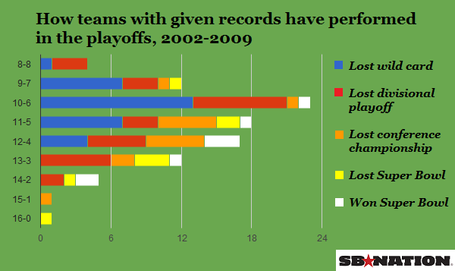 Admittedly, given the sample size, this falls somewhere between "documented trivia" and "reliable indicator," but it is interesting to observe the relative under-achievement by 13-3 teams. If we were to stretch the data back to include the 1990s, it would be far more ugly, since the Chiefs went 13-3 497 times in 10 years (no one knows how this was possible!) and won negative-five playoff games.

And finally, let's re-visit the nature of tie-breakers. ESPN.com has a neat archive of pages that explains, in scientific terms, how the tie-breakers applied in specific situations. For example, here is the explanation given regarding how and why the 2006 Giants made it into the playoffs via tie-breaker:

For so few words, that's pretty complicated. As a fan, there are few things worse than learning that your team is out of the playoffs thanks to cold, pencil-pusher logic rather than raw wins and losses. 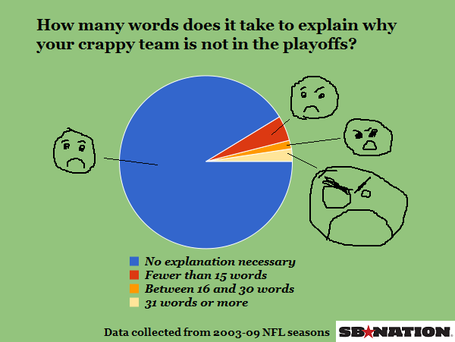 So, there you have it. These six charts illustrate fundamental truths about the NFL playoffs, and are uncompromisingly predictive of what will happen in the future. If the NFL sees this and recognizes it as so unwaveringly comprehensive that they determine that actually playing the games is redundant and decide to cancel the postseason, I will offer my sincere apologies, but I will also accept gratitude.

Note: hundreds of pieces of data were used to piece these charts together, and while I did double-check them, mistakes are always possible. If you notice any inaccuracies, please don't hesitate to point them out.