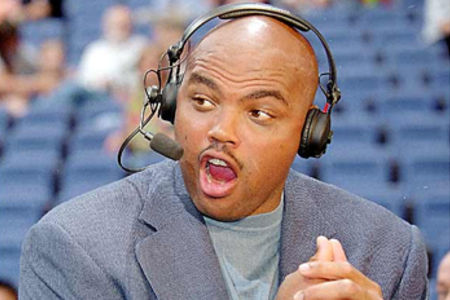 There's no way to sugarcoat this: Brett Favre's legacy as an NFL quarterback has been more or less decimated with the Vikings this year. It's kind of amazing. Remember when we fetishized the myth of Favre? When we all instinctively dropped our g's talkin' 'bout the ole gunslinger?

When his stubborn immaturity wasn't a problem; it was just more proof of that youthful exuberance we all loved. When Brett made mistakes, we guffawed and said, "There goes ole number four actin' out again. He just can't help himself."

I know we all remember this vividly, but it's funny to think about quite how ridiculous the Favre myth used to be. And now, Charles Barkley breaks the real-o-meter (again) with a lengthy discussion of Brett Favre's small penis.

Asked for his thoughts on Favre allegedly text-messaging photos of his penis to a Jets sideline reporter, Barkley told WJOX in Birmingham that his biggest problem with the whole ordeal was...

First of all, who can hook me up with a copy of Charles Barkley's Ten Commandments?

Now, to qualify these remarks on the Chuckster's behalf: It's hard to believe his "biggest problem with the whole thing" was Favre sending an unimpressive picture. Sending the picture in the first place was obviously the most ridiculous move. So (hopefully) that goes without saying.

"There goes ole number four actin' out again. He just can't help himself."

Having said that... Barkley's reaction isn't crazy. People text messages pictures of themselves all the time. It's pretty trashy, and in this case it was a pretty flagrant case of sexual harassment, but it's not unheard of. But to Barkley, and to me, and a lot of other people that have seen this stuff, the biggest "What the Hell?" moment in all this was when we saw the photos.

"He sent a picture of that?"

That's like rolling to his right, throwing across his body to the middle of the field. Not to sound too much like an announcer here, but that's just not a smart play, Brett.