Share All sharing options for: Michael Vick Should Have Been Executed, Says Fox News' Tucker Carlson 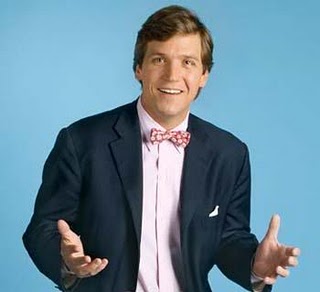 Michael Vick suffered an injury on the first play of Tuesday night's Eagles-Vikings game, but for some people, that sort of comeuppance isn't nearly enough. Yeah, he probably should have been executed.

"Now I'm a Christian ... But Michael Vick killed dogs, and he did it in a heartless and cruel way. And I think, personally, he should have been executed."

Maybe this was inevitable. There's no more emphatic endorsement of Vick's reformation than a vote of confidence from Barack Obama, so I guess we needed to an equal and opposite reaction from someone like Carlson. But it's still completely disgraceful, right? Right.

Video of Carlson's comments is after the jump.

For the record, Vick isn't a victim of anyone's mistakes but his own, and to Carlson's credit, looking at this story from a broader, human perspective, Tucker reminds us of the tragedy underpinning it all, where humans can lose their way, and what that should mean if we're paying attention.

The fundamental lack of empathy, the tragic disconnect from reality, the years of misdirected energy, and the callous attitude toward life... All of it contributed to what happened. What should never happen among civilized human beings. But more than anything, it's just sad that he never understood why he was wrong. Why he was so incredibly inhumane, that it makes people sick.

Maybe it's a cultural thing, and his attitudes were incubated by like-minded cretins that encourage this sort of thing. But it's still disgusting, and it's not an excuse for his cruel and heartless perspective on life. I'm not saying he ever deserved to be executed, but regardless of whether someone might want to employ him, rational people could argue his galling lack of empathy makes him completely worthless to society.

Putting him on TV every week is even worse; it sends the wrong message to America. The worst message, really. Of course, I'm talking about Tucker Carlson here. But you knew that, didn't you?

What a dickbag. Go Eagles.