Share All sharing options for: Ben Roethlisberger Won't Let A Broken Nose Stop Him Or The Steelers

"Say what you want about Ben Roethlisberger..." began Cris Collinsworth during the fourth quarter of last night's Sunday Night Football game. He went on to praise Ben's toughness, of course, because that's written into every announcer's contract, ever.

If we can really "say what we want" about Ben Roethlisberger, let me just say that I loved the broken nose story, too. It was a story that even the skeptics had to love. Especially the skeptics. 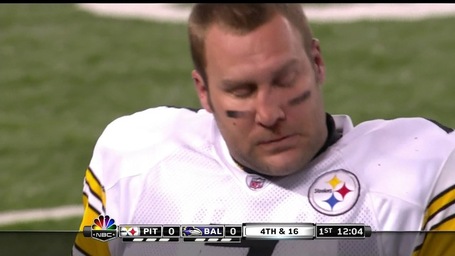 Click through for a hearty "No Means No" chant.

Sure, "Say what you want about Ben" may have been as close as the broadcasting fanboys ever got to mentioning Roethlisberger's checkered past, but if we can say whatever we want about Big Ben, then let me add my two cents. He's just so, SO tough. And you know, it was just great seeing that toughness on display last night. So great, I almost wish this could happen every single game.

He got hit and battered around the field all night long, and just kept getting up. Couldn't happen to a tougher, more deserving quarterback. So say what you want about the guy that hit him in the face, Haloti Ngata, but... Well, win or lose, that was awesome.