Rex Ryan Is Who We Thought He Was, Buries The Patriots Game Ball

Share All sharing options for: Rex Ryan Is Who We Thought He Was, Buries The Patriots Game Ball

24 hours after the Patriots delivered the most demonstrative ass-whooping of the year against Rex Ryan's New York Jets, it was time for the Rex and the boys to put it behind them. Or beneath them.

"This morning (Ryan) made us get out of a team meeting and he buried a football in the ground along the sideline on the field and said, ‘Just forget about it, forget about this game.’ It was actually a game ball from Monday night,’’ Darrelle Revis said. "Rex said, ‘We’re burying this game and what happened Monday night, and let’s move forward.’"

And THAT, my friends, is why Rex Ryan continues to be the most awesome coach in the NFL. Best coach? Well, maybe not. Belichick probably had the Patriots watching film during all this. But most awesome? The answer to that question has got to be Rex Ryan.

Now, who's the saddest coach in the NFL? 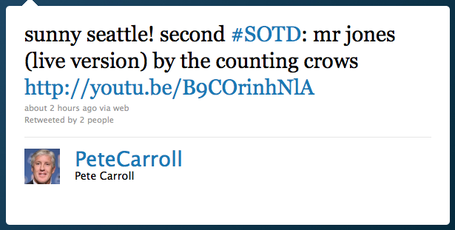 ...Can't tell whether it's funnier if he does know what that song's about, or if he has no idea whatsoever. In any case, I'm now following Pete Carroll on Twitter, and this all reminds me of my college roommate, Jarvis. Mr. Jones was his naked song, you see, meaning anytime it was played at a party, Jarvis had to get naked. Just because: That's the rule.

Now: Do you have a naked song? Does Rex Ryan? These are the questions you should be asking yourself as hump day concludes. Is "Mr. Jones" secretly Coach Carroll's naked song?