The Designed Rush, Week 3: A Handy Guide To Patriots' Grittiness

A closer examination of the Patriots grit-filled roster, which consists of the scrappiest bunch of white guys you'd ever wanna meet. Also: A delicious premature celebration in New Orleans, Troy Polamalu's in-game tweet, and much more.

Share All sharing options for: The Designed Rush, Week 3: A Handy Guide To Patriots' Grittiness

It's no secret among followers of any sport that Boston fans are often enamored with a certain type of player. The archetype is best described as an undersized fellow who makes up for a lack of natural talent with oodles upon oodles of hustle. This player should also be white. This last item is kind of a sticking point.

Savvy sports fans have long been aware of the code used to identify this model. He is "scrappy," "gritty," and most likely "a gamer." Not in the sense that he plays video games, mind you, because such a frivolous activity would distract from the unwavering focus that we are reminded breathlessly time and again that this player is possessed of.

Constantly restocking a roster with gritty players is no easy task, however. For one thing, for all their grit, many of these players are simply not very good. It takes the rare scrapper to be skilled enough to belong on an NFL roster. When such a player does arrive on the scene, the Patriots pounce.

In their team's dominant years of the early part of the last decade, Patriots fans had gritty core contributors such as Mike Vrabel and Larry Izzo to embrace as one of their own while keeping the team's other players at a respectful but clearly defined distance. Unfortunately, these legends aged and eventually moved on. In the years since, the Patriots have been slowly but surely compiling what might now be their most gritastic team to date.

Obviously, we are all familiar with Wes Welker. He is the apotheosis of grittiness. The standard by which all other scrappers are judged. He does no less than embody the hopes and dreams of awkward football loving white people the world over. But for all of Welker's grit, he can't possibly hope to sustain all the pale admiration of the New England faithful. Lucky for them, the Patriots have once again stockpiled a vast array of scraps to bolster the overall fan experience.

Outside of New England, many of these players, burdened by the culture's bias toward the talented, remain relatively obscure. Allow me to familiarize you with them:

Julian Edelman - The deceptively non-Jewish Edelman emerged last season as a sort of Welker Lite. Tom Brady exclaimed last year that throwing to him was desirable because, while he wasn't quite as effective as Welker, completions to Edelman came at a cost of zero calories. However, while no current study has validated this claim, it is believed that the Welker-like sweeteners present in Julian Edelman might be cancer producing.

Rob Gronkowski - The Patriots came into the NFL Draft with a need at the tight end position. Benjamin Watson never quite fulfilled his potential at the position. Plus, tight end is always a great place to work in a gritty mauler of a scrapper. So the Patriots selected him in the second round. Just to make Gronkowski seem more like an underdog, the team selected another slick pass-catching tight end, Florida's Aaron Hernandez in the fourth round. That Bill Simmons currently has Gronkowski as his Twitter profile picture should tell you how effective this gambit was.

Danny Woodhead - Danny was a minor star of this year's Hard Knock series, as he spent the preseason with the Jets. Fellow players called him "white chocolate." Rex Ryan called him "little fucker." This man was destined to become a Patriot.

When the Jets cut Woodhead, the Patriots wasted no time scooping him up. On Sunday, he carried the ball three time for 42 yards, including a pivotal 22-yard touchdown run in a 38-30 win over the Bills.

A star was born. A little engine was shoved into operation despite government regulations that specifically mandate larger engines. Dan Shaugnessy sang his name from the top of a lighthouse.

"Not me. Today this is the happy place, the no-fault zone. Today we bring you the Ballad of Danny Woodhead, the little engine that could."

Peter King pronounced him lofty and offered to sponsor his status as a Starwod Preferred guest.

And just like that, the Patriots have compiled what may be the most thorough array of grit seem on an NFL roster in decades. Someone jokingly suggested earlier in the season when Randy Moss was fuming about not feeling accepted that the Patriots would be better suited trading him to Cincinnati for Jordan Shipley. That's a funny joke that will never happen, but don't think Shaugnessy or King hasn't fantasized about it.

"New offensive linemen #86 the one and only Hines Ward makes holes for running back. He can do it all."

-Troy Polamalu, during yesterday's game against the Buccaneers.

That's a nice thing to say about Hines, but tweeting during the game is still a big no-no, Troy. That probably explains why the tweet was quickly deleted from his account, but not before a few people retweeted it. I did as well, asking whether it was the work of someone ghostwriting his account. Former USC teammate Alex Holmes, who is also Troy's brother-in-law, responded that Troy's wife Theodora wrote the tweet on accident. She clarified on her account:

Well, that solves that, unless of course the league decides to fine Troy for the tweet anyway, in which case, that's probably one fewer $10,000 gift she can count on this year.

In other matters Polamalu-related, the Pro Bowl safety was unable to secure an interception for the first time this season. That is, at least an official pick. He went and got himself one for show on the sideline after he was benched in garbage time late in the blowout with over Tampa.

Grotesque, hairy men whimsically playing the flute are always good for a yuck, I suppose. So thanks for the inclusion of that, Burger King. That said, I'm always taken aback when places promoting breakfast options decide to strike the most creepily manic tone possible for their ads. Yeah, fine, you want to associate your early morning food offerings with people being incredibly wide awake and energetic. That's why you're in marketing and I am but a lowly, pantsless sports blogger. Still, maybe I have to lay the blame on comedian Louis C.K. for the note-perfect segment on his FX show about the near comatose state people actually find themselves when going for the daily caffeine and food fix in the morning. When I think of breakfast food, I want to know it's going to break from me from state. Because I am assuredly not marching anywhere to get it.

Meaningless Stat That Someone Will Inevitably Overstate The Importance Of

Of the three games that have gone to overtime this season, none of them have ended on the first offensive possession. Historically (or at least since 1994), teams that get the ball first win on that first possession 34.4 percent of the time, so if only one of those games had ended in a first-possession score, it would be just about in accordance with that stat. Of course, two of the three teams that won the overtime coin toss this year eventually won the game on a subsequent possession, the latest being the Falcons victory over the Saints yesterday. That is about in keeping with the 59.8 percent of teams that win after winning the overtime coin toss.

It appears we have ourselves another distinguished gentleman to induct into the Jeremy Shockey Hall of Hilarious Premature Celebrations. An unidentified Saints coach (though scanning through the team's coach bios, it looks like offensive assistant Carter Sheridan) was forced to check his triumphant fist pump when New Orleans kicker Garrett Hartley shanked the would-be game-winning 29-yard field goal in overtime against Atlanta. If watch the .gif image enough times, you get the impression that Sheridan may have perfected this motion through years of instructing the finer points of the Tuck Rule.

- Let's all be sure to thank Seahawks receiver Mike Williams for introducing the term "Federlined" into the football lexicon. Apparently, it is supposed to denote an instance where a team takes another, perhaps better known, to school. Or just takes something from them, like a victory. This term, of course, makes reference to Kevin Federline, the ex-husband of Britney Spears who received an ample financial settlement for Spears a few years back. How timely, Mike! Maybe if you manage to stick around the league long enough you can coin a term involving the Palins five years down the road.

- Forget Michael Vick, Austin Collie, Adrian Peterson or Tamba Hali. The real heroes of Week 3 were the sun shield hoisters. Why mess with ordinary, cumbersome fans or misting machines when you can have two nondescript low-level team functionaries hold a flimsy white plank over the head of an NFL player? I tell you, I missed my true calling in life. If anything fits the bill for an unskilled person who wishes simply to be in close proximity to football, it is that. Granted, it is a job that is only needed for maybe the first month of the season, but I can find a way to make myself seasonally productive the rest of the year. Come winter, I'll be running that crank-operated space heater, just you watch. 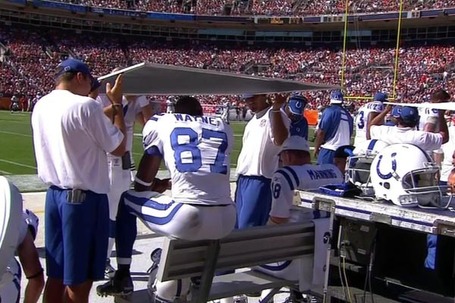 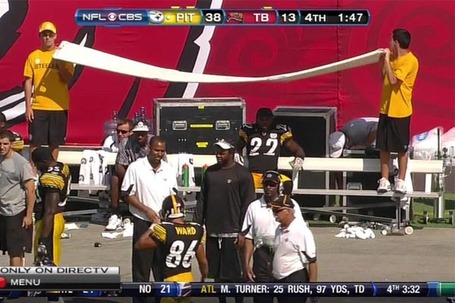 - As PFT's Gregg Rosenthal notes, the 49ers called three consecutive running plays up the gut while the team was down 24-3 to the Chiefs with 16 minutes remaining in the game. Nevertheless, Mike Singletary remains committed to embattled offensive coordinator Jimmy Raye. And why not? They have overcome the painful communication issues that dogged the 49ers in Week 1 against Seattle. Now unimaginative and ineffective playcalling comes through in crystal clear detail. That, my friends, is progress.

UPDATE: Oopity. Spoke too soon. It appears as though Raye will be getting canned. If only one of those three runs had been to the outside, Raye would have demonstrated his creativity.

- Laugh all you want at referee Carl Cheffers, who momentarily forgot who he was penalizing and for what yesterday during the Texans-Cowboys game. You'll be signing a different tune when the league appoints him the head referee for this year's Super Bowl. Oh yes, go ahead and doubt. You will see. 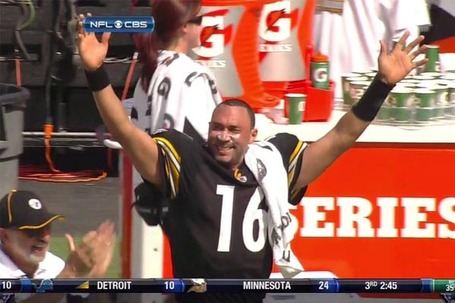 - Before the knee-jerk columnists regurgitate their predictable "look at wholesome Charlie Batch doing well - he should start at season" pieces, perhaps we should give Batch a moment to wipe the yayo off his face.