Rex Ryan, The New York Jets, And Why America Should Root For The New Bad Guys

Rex Ryan and the New York Jets beat the New England Patriots on Sunday, and just like that, the insanity continues for one more week in New York. It's like the '86 Mets all over again, and somehow, the NFL's Bad Guys keep winning. Thank God.

Share All sharing options for: Rex Ryan, The New York Jets, And Why America Should Root For The New Bad Guys

As the minutes wound down in New England on Sunday and it became clear that yes, the New York Jets were really going to the AFC Championship Game, I was ecstatic, but when a friend asked why, I couldn't explain why I liked the Jets so much. Then I thought of Jeff Pearlman's ode to the 1986 Mets, The Bad Guys Won, and I realized--that's New York this year. The Jets are the NFL's Bad Guys.

And 25 years after the '86 Mets, it's impossible to root against the Jets.

Don't get me wrong. On an individual basis, it's easy to hate the Jets. Mark Sanchez is basically the Vincent Chase of the Jets' Entourage, and he plays quarterback about as well as Adrian Grenier acts. Braylon Edwards is the superstar wide receiver that drops passes, gets a DUI, and then inquires about a modeling career. Darrelle Revis spent the offseason holding out for a record contract, then spent much of 2010 playing himself into shape. The other cornerback, Antonio Cromartie, is the one that can't remember the names of his kids. All of whom are coached by Rex Ryan, the guy with a personal life so infamous, his critics have forgotten about the offseason incident where he allegedly encouraged sexual harassment.

So, yeah: There have been plenty of opportunities to point at the Jets and call them obnoxious, overrated, blowhards. And when New England pummeled them with a 45-3 statement in Week 13, that's sure what it felt like. For all their entertainment value, the Jets looked like a collection of cocky individuals, humbled by a true team that preferred to do their talking on the field.

But think about the Jets as a whole. As a true team. Like a comet comprised of unstable elements, powered by cockiness and complete, utter lunacy. Perpetually on the verge of self combustion, but now soaring past all the stars. First Peyton. Then Brady. This week, Big Ben. 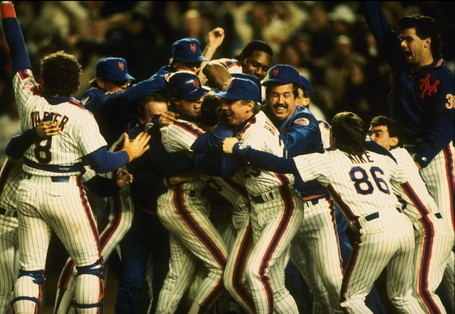 The '86 Mets were never supposed to be World Champions. Before and after, New York City was a Yankees town; the Mets had always been the little brother that could never quite get it together. But somewhere in the early '80s, a group of players arrived in Queens that'd come to erase every stereotype that'd ever surrounded that hapless franchise.

It wasn't just that the Mets were good. They didn't care what anyone thought of them. They bullied people on and off the field. They embodied every athlete stereotype, but they embellished it. The Mets were literally the stereotype on steroids. And amphetamines. And liquor. And cocaine (hey, it was the '80s). Stars like Darryl Strawberry and Doc Gooden dominated New York headlines, while upstart maniacs like Lenny Dykstra, Jesse Orosco, and Kevin Mitchell, helped terrorize locker rooms, bars, and strip clubs across the country. And of course there was Davey Johnson, the hard-drinking manager that co-signed all of it, backing everything with a bravado that trickled down to the entire team.

As Pearlman writes of the Mets' celebrations after the NLCS (seriously, go buy the book):

Some ninety minutes after the victory, a sticky, drenched Cashen, surrounded by empty bottles and crushed cans, made an announcement to his sticky, drenched players: "The World Series bus is leaving! Anyone not on it gets left behind!" This was not a joke. The Mets and their entourage piled onto a pair of buses that went to Houston's William P. Hobby Airport. En route, beers were chugged. The remaining champagne bottles were polished off and then tossed to the ground. Even manager Davey Johnson was indulging.

Then they reached the plane.

And a few hours later?

...the airplane was a disaster area. Upon landing, two or three wives had to be carried off the jet. Others weren't quite sure of their whereabouts. Half the team exited wearing T-shirts and ties. Sisk wore one shoe. Fans who had waited for hours at Kennedy Airport to greet the team were shocked at what they saw. "To have the wives in their snazzy North Beach Leather outfits, covered in vomit, it didn't make for a pretty picture," says Mets pitcher Ron Darling. "And the guys were coming off in various forms of disarray of dress. We were gross."

The plane was even grosser. A few days after the flight, Cashen received a bill from United for $7,500, along with a note saying that the Mets' business was no longer welcome.

Mets manager Davey Johnson was reamed by the front office for his lack of discipline as management told him his players would all be held financially responsible. Then he spoke to the team:

...Johnson was pacing back and forth, a copy of the United bill rolled up in his hand. The players were awkwardly staring at the ground, quiet and motionless. "Men, what are we going to do about this? What should we do?"

"Well," said Johnson, "do you know what I think? I think in the next four games you'll probably put enough money in these guys' pockets to cover this. So f--- this bulls---!"

With that, Johnson ripped the bill in half, crumpled it up, and threw it into a nearby garbage can. The room exploded...

Hmm. Does that remind you of anyone? 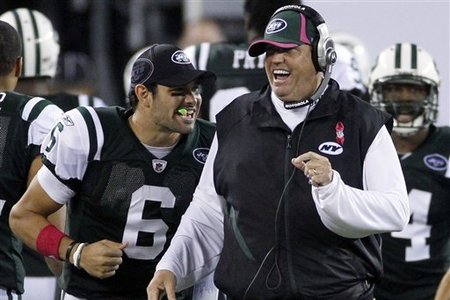 The Jets haven't won football's World Series, of course. But look at who's left in the NFL Playoffs, and tell me why we shouldn't be rooting for a Jets Super Bowl at this point. You've got...

And that just leaves the Jets, one of the most honest, entertaining teams we've seen in the past decade, and a franchise that's spent the better part of forty years existing the shadow of the Giants. You may not like Rex Ryan's style, but if you don't, you probably hate America, too. The Jets laugh at themselves in one beat, and talk openly about kicking opponents' ass in the next. And best of all, they piss all over moralists like Tony Dungy, refusing to apologize for any of it. What more could you want? Teams like the Jets make sports more fun. 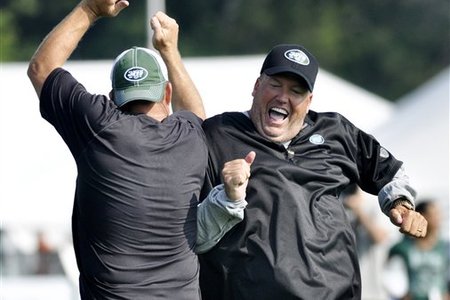 And teams like the New England Patriots do the exact opposite. It's why the rivalry between the Jets and Patriots--and between Rex Ryan and Bill Belichick--is so completely perfect, and why Sunday's upset win was so perfectly cathartic for everyone out there who realizes sports aren't supposed to be science, but its antidote.

Sure, Rex Ryan's defense is just as intricate as anything Belichick has ever drawn up in New England, and in general,  the dichotomy between the Jets and Patriots isn't quite as black-and-white as it seems. But the distinctions are still important.

"I believe our team's better than any f***in team in the league," Rex Ryan said in August.

Where Bill Belichick has shown that he believes in the strength of his system above any individual player, Rex believes in his players above all else. Where Belichick benched Wes Welker for daring to talk trash before Sunday's game, Rex Ryan backed up his players' trash talk with bravado of his own. Belichick demands conformity; Rex encourages players to be themselves.

And even if this year's Jets have sometimes looked like a cast of cartoon characters, that's still better than the faceless machine being powered by Belichick up in New England. I mean, think of the Mets.

Had the '86 Mets existed in 2011, Deadspin would become an unofficial Mets blog. Guys like Darryl Strawberry and Kevin Mitchell would have been vilified every step of the way, and Davey Johnson would be killed for his lack of control. These days, teams like that simply can't exist. But despite a season of distractions and a week of supposedly foolish trash talk, the Jets kicked ass on Sunday.

As America prepared to ridicule the Jets one more time, Rex brought Dennis Byrd to give a peptalk for the ages, got his guys ready with a creative, insanely effective gameplan, and the rest was history. As Jets DT Trevor Pryce said afterward:

"It was out of sight. We did some stuff I’ve never seen a football team do. We flooded coverages, had man schemes that looked like zone, and zone that looked like man. Our first reaction was, ‘How are we gonna do this? How is this gonna work?’ I mean, 14 years in the NFL, and I’d never seen anything like it. Rex came up with some Madden [expletive], like it was a video game."

Just like that, Shaun Ellis and the New York defense dominated Tom Brady and the Patriots, Mark Sanchez played his best game of the year and led the New York offense up and down the field all day long, and New England never knew what hit 'em. It's not to say that Ryan's approach is suddenly "better" than that of Belichick. But after a year in which we all had to concede to Bill Belichick's unyielding genius, it's nice to know that a dyslexic blowhard with a stupid grin can one-up the stonefaced mastermind that everyone lives to fear.

Somewhere along the line, the New England Patriots made it cool to play without personality and interchangeable personnel. And as the wins have piled up and the dynasty's taken shape, the Patriot Way became entrenched as the model for NFL success in the new millennium.

But the antithesis to the Patriots establishment keeps winning, and Sunday was the biggest win yet for Rex Ryan's Bad Guys. The Jets still have two games to go before they can be talked about in the same sentence as the '86 Mets, but they've already come further than anyone expected. It hasn't always been a pretty year in New York, and the Jets aren't about to be politically correct as the journey continues, but then, that's why we love them.

Here's to hoping for two more wins and a happy ending.