Those famous SNL skits about Chicago sports fans are true to life: everything in the Windy City really does go back to the Chicago Bears. Last weekend in Chicago sports synergy the Chicago Blackhawks' designated national anthem singer got the call-up to Soldier Field.

This time around even the poor Charlotte Bobcats, who are owned by Chicago legend Michael Jordan, became nothing but pawns in the great NFC Championship war when they stopped by to play the Bulls: 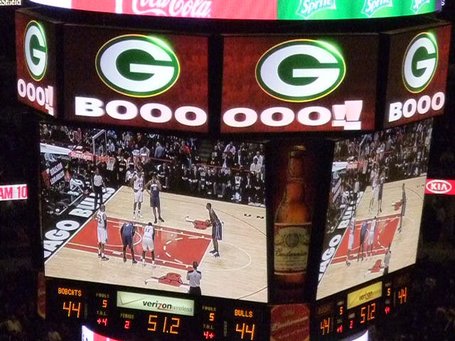 When a free throw late in the first half, attempted by a 15-24 team in a midseason basketball game, becomes Ten Seconds Hate fodder, you know your town is taking its football game seriously enough. Just be glad they didn't have to break out the Photoshop of Aaron Rodgers crushing a human face forever. Chicago has always been at war with Seattle Green Bay.

Considering this is one of the biggest games in the history of the NFL's most-storied rivalry, it's no surprise that median ticket prices were nearing quadruple digits at one point.