Share All sharing options for: Jay Cutler Injury Backlash: Fans Burning His Jersey In Chicago, Twitter Lashing Out About Toughness

The way the NFC Championship Game ended could barely have been worse for Jay Cutler. His team finally got the ball moving on offense and rallied to a closer, valiant loss but only after he was forced to leave the game with injuries. That's the sort of scenario that gets fans thinking about burning Cutler's jersey. 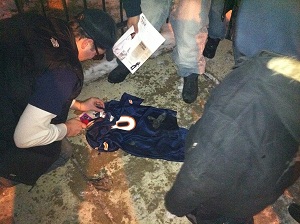 That picture, from @brianvanarsdale, should tell us something about the reaction to Cutler's terrible day. I hope it's not the only thing we remember about Cutler's day, though — and I hope we learn something from it.

Searching for Cutler's name and "bitch" on Twitter finds a lot of people unimpressed with Cutler's toughness; searching Cutler and girl finds more folks lashing out.

This is the ugly side of football, the "ultimate man's sport": toughness is determined by people who are sitting on couches with laptops and iPads, and graded on a scale from man to woman that seems to have been codified in 1957 and untouched through the women's rights movement. And yet no one knows what's actually wrong with Cutler, or what he might have been risking by returning to the game.

We might not learn about that, either, thanks to the NFL's notoriously secretive injury culture, which guards information about maladies like state secrets, lest players be seen as less tough or valuable or teams be seen as heartless machines. Could Cutler, who reportedly left with a knee injury, have also sustained a concussion? Could his knee injury be worse than anyone knows?

We as fans tend to lionize athletes who exhibit "toughness" above and beyond their peers despite having little clue what those players go through to play. Yes, players ripped Cutler today, but the Bears have had his back, with Cutler saying he wanted to keep playing but the team wouldn't let him.

It's probably already too late for Cutler's reputation on this day; things calcify pretty quickly when Caleb Hanie plays well while you sit on the sidelines. But in the days and weeks to come, I hope that we take some time to figure out what was wrong with Jay Cutler today — and reflect on whether we were wrong to judge him as harshly or as quickly as we did.