Antonio Cromartie Is Ready To Fight Matt Hasselbeck (On Twitter)

After Jets CB—and America's foremost fertility expert—Antonio Cromartie drew the ire of several players with his comments on the NFL's labor situation, he took to Twitter to explain himself. Or, more accurately, to explain he doesn't have to explain himself to anyone:

I don't give a who about Ray Lewis or @ddockett talking about what I said. There's 10's of thousand ppl who will lose jobs. They taking our healthcare away and for players that have surgery can't even get rehab once March 3rd gets here.

But then he heard about what Matt Hasselbeck tweeted (and deleted), and things got real:

This after Hasselbeck tweeted: "Somebody ask Cromartie if he knows what CBA stands for." So what does Matt Hasselbeck have to say about this? His response is after the jump. 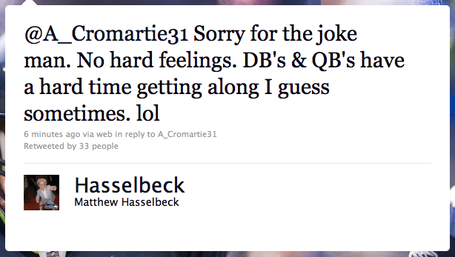 And let me be the first to say: LAME. WEAK. POSTIVELY CUTLER-ESQUE. Come on, Matt. We don't ask much, but if Twitter's going to become the new millenium's version of rap battles, then the least you can do is play along.

Sorry for the joke man?

DB's and QB's have a hard time getting along I guess?

Did you miss the part where he said he wanted to smash your face in? And if you're going to question someone's intelligence, it's bad enough to delete the tweet and pretend it didn't happen. It's even worse to act like "oh, it was just a silly joke!" It wasn't. Or, even if it was a joke, it's too late.

As Slim Charles once said in The Wire, "If it's a lie, then we fight on that lie." And as Antonio Cromartie once said in Hard Knocks, "I got Alonzo, who is five. I have, um, Carris who is three. I have my junior which is three. I have a... My daughter, who just turned three, as of yesterday. I have another son named Tyler. He turns three in December. I got another daughter that was born October 16, named London. 'Nother daughter that was born named LeLani, who is, uh, two years old. And I have my newborn, with my wife. Her name is Jersey."

See, Matt? There's ample fodder this Twitter War to escalate until Cromartie brings up your sister-in-law and/or the NFL steps in, but you just ruined it. "No hard feelings"? Pfft. Thanks for nothing, Matt.