Tim Tebow has been named the starting quarterback for the Denver Broncos, and just like that, the most polarizing player in the NFL takes center stage. But the Meaning of Tebow is a punchline that will only get funnier as the years pass.

Share All sharing options for: Start Tim Tebow! Or, The Biggest Practical Joke In NFL History

We've all gotten used to calling Michael Vick the most polarizing player in football over the past few years, but that's really not fair to Tim Tebow. He can sometimes seem like Michael Vick's doppleganger.

One's white, the other's black; one's thunder on his feet, the other's lighting; one represents What We Were, the other, What We've Become. But even if they're both on opposite corners of the morality-sports intersection, they're at the center of a debate about what a quarterback means. The yin and yang of our ongoing search for quarterback enlightenment.

And maybe it won't last beyond this season, but if Tebow's really going to start in Denver, the rhetorical rollercoaster should keep everyone entertained. When he played on Sunday and nearly led a comeback against the Chargers, it was like the floodgates had been opened all over again, and we were all rocketed back March 2010, when the debate about Tebow in the NFL first began.

On Sunday, one woman tweeted things like, "YEAHHHHHHHHHH!!!!!!!!!!!!!!!! #TEBOW Let's Do THIS!" and "Win or lose, I'll always have faith in #Tebow." Others would sarcastically point out that the Broncos had just 34 passing yards late in the game--all belonging to Kyle Orton. It's like a creationism debate come to life. Do you believe what you see, or what you feel?

It's great. Especially because the people who believe in Tebow really believe, man.  Read the comments section on just about any Tebow column, and you see stuff like this:

Tebow is a humble man. He doesn't consider himself great.....that's the difference between earlier Heisman QB's that fail. It's almost like he convinces players to rally around him because he admits he doesn't have the "NFL skills" and he requires everyone to help him move the ball. I've said it before....He is magic and he can throw better than you think when the game counts. Buying time does wonders for his completion percentage in the future. Just wait and see. He's got guts and not afraid to run up the middle.....He's not prototypical; He's better; He's superman; He's Tebow.

See he's so humble and that's what makes him America's greatest humble Superman. That's from the comments on a column by Woody Paige, where Denver's number one columnist talks up Tebow's Sunday vs. the Chargers:

The detractors will say that: Tebow bobbled three snaps, but he and starting center J.D. Walton don't practice together. Tebow and Brady Quinn share reps with the backup center; Tebow missed on his first four passes; and the Broncos punted on his first three possessions. ... But he came through by running for a 12-yard touchdown and hooking up with Knowshon Moreno on a 28-yard screen pass.

"I was feeding off the crowd," Tebow said. "I love it when they're rowdy."

The Broncos didn't win the game, but they won the hearts of the fading faithful.

Yep. THE FAITH HAS BEEN REWARDED with a close loss at home. 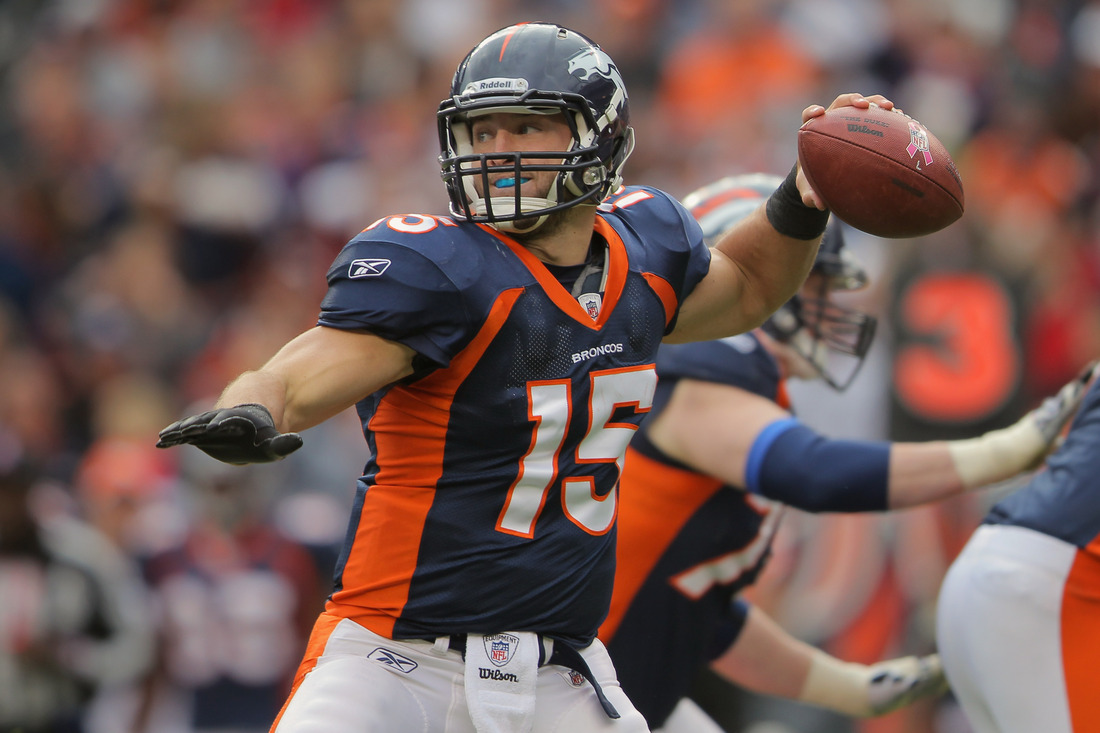 I didn't get to watch Tim Tebow on Sunday. Or any other NFL games, for that matter. This makes recapping any NFL stories from this weekend a little disingenuous, so we're keeping this week's NFL column brief, except to say that you don't realize how addicted you are to football until someone says you can't watch football on an NFL Sunday. And that, all things considered, the Tim Tebow Experience is probably best experienced from afar.

On TV, he's like a thought experiment come to life. What would happen if you put Peyton Hillis under center? Every video game coach that's ever put a position player under center can now see the revolution play out in real life. And it's fun to watch whether he succeeds or not.

But watching from afar, reading tweets without a TV in sight, the meaning of Tebow comes into much sharper focus. You see it in how passionate both sides are. For a nation that's been weaned on polarized--and televised--debate, Tebow's less a football player than a talking point, where the "point" depends entirely on who's doing the talking, and the meaning's perfectly elastic.

Either he's a symbol for how hype engulfs reality to the point where even the most sober analyst has to concede, "Hey, they may as well start him just to prove to his fans that it won't work." Or, he's a symbol for the misplaced priorities of the scouting world. Virtues like #HUMILITY and #HEART just don't trend in 2011 the way they used to.

Anyway, in light of the news that he'll be front and under center this year, it bears mentioning that Tebow Evangelicals and Tebow Heretics can read his performance however they want.

So Tebow's not actually Michael Vick's doppleganger, then. Because there have been a lot of weeks when Vick's success or failure transcends the rhetoric surrounding his every move. How he plays actually changes the landscape of the NFL. Say what you want about who he is, but who he is as a player has always demanded our attention. Next to someone as electric as Vick, Tebow's just a sideshow. One, big joke.

While everyone in Denver and Bristol and everywhere else argues about the Meaning of Tim Tebow in the NFL, he's one of hundreds of NFL also-ran players that really, truly mean nothing. Good enough to be mediocre, limited enough to never be better.

Not every quarterback's a budding savior, and not every hard-working employee has what it takes to change the direction of the company. Regardless of how HUMBLE he may be.

And, just for the record, one day it'll be pretty funny when someone asks.

"Remember when we spent all that time arguing about Tim Tebow?"