We all had a good laugh when LeBron James tweeted at John Clayton about NFL teams signing free agents, and Seattle Seahawks head coach Pete Carroll tweeted back showing some apparent mock interest. It was hilarious, and some much-needed comic relief during the depressing time that is the NBA lockout.

You thought this was done, then, didn't you? Well if your name is Stakes, consider yourself raised. Pete Carroll may just have plans for LeBron in the Emerald City after all. 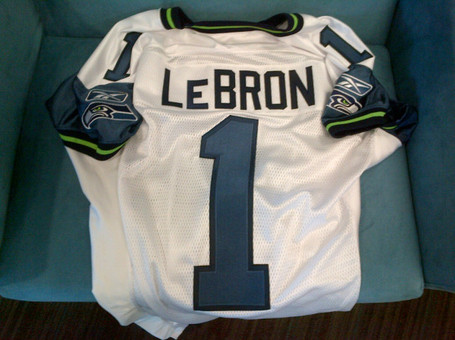 According to the NFL's uniform policy, this jersey would make LeBron eligible to be a quarterback, a kicker, or a punter, so Olindo Mare Steven Hauschka, you've been warned. As far as memorabilia goes, I would give my year's worth of SB Nation salary for this bad boy. That's right, 11 whole dollars.