Jim Harbaugh and Jim Schwartz sparked a controversy with their post-game scuffle after Sunday's 49ers-Lions game, but the two coaches also got us thinking about a far more important question. In a battle of NFL head coaches, who wins?

Jim Harbaugh grabbed his hand and slapped his back—HARD—and then Jim Schwartz turned around like, "What the hell?" He ran after Harbaugh shouting at him, and as both men jogged off the field, only intervening media stopped them from coming to full-on blows.

A weak moment for both coaches, obviously—Harbaugh should've been more restrained with his celebration, and Schwartz probably should've avoided sprinting behind Harbaugh like a crazy person. But take a step back it was all kinda great. Even if both coaches gave into immaturity, what they gave us was authentic. Almost like they were breaking character, and instead of the robot head coach model that's prevailed for 60+ years, we got a reminder that these are real humans.

Of course, it happened in the NFL, where moralization is always at an 11 on the Spinal Tap speakers of punditry, so any sort of deviation from tradition is WRONG, man. Just WRONG. To this point, here's Mike Florio playing the "It's just not like it used to be" card at NBC's Pro Football Talk:

Not that long ago, all coaches exuded a sense of dignity toward the game and respect toward each other.  From Tom Landry to Chuck Noll to Bud Grant to John Madden to Don Shula, coaches didn’t treat each other like opponents in the main event of the next pro wrestling pay-per-view.

Here's a confrontation starring the same Chuck Noll mentioned above, sticking his finger in Jerry Glanville's chest while both men yell at each other. It's from 25 years ago (via @vitostellino).

So... Yeah. Animosity between coaches isn't new; the only difference between now and 25 years ago is the 25 different cameras trained on everybody at all times. We could get upset about Jim Schwartz and Jim Harbaugh losing their cool, but just for the sake of everyone's intelligence and sanity, let's not go off and mourn of the death of decency here.

Especially when it's so much more fun to answer this question:

...Speaking of intelligence and sanity! We were in a slowish meeting at SB Nation one time when my colleague Spencer Hall mentioned that he was passing the time by handicapping everyone's potential if the meeting turned into a massive battle royale. It's pretty much the greatest daydreaming prompt on earth if you make the mistake of imagining it yourself; once you begin putting your co-workers in a theoretical deathmatch, you simply can't stop.

So in the spirit of Spencer, and because any sincere discussion of Schwartz and Harbaugh is an absolute waste of time... The NFL Coaching Deathmatch Power Rankings. In descending order...

32. Jason Garrett — If there's an NFL coach more in need of a wedgie, I haven't seen him. He's the coach who would probably spend weeks coming up with an elaborate plan for combat, only to have the whole thing derailed by one poke in the chest that knocks him off a bridge and into a river. A river full of sharks, hopefully. Video of this exchange can be seen here.

31. Norv Turner — Hey, it's the NFL coach most likely to punch himself in the face!

30. Pete Carroll — "Hey come on fellas. FELLAS. Why are we fighting, huh? How 'bout we all just kick back and laugh a little, huh? Did you ever think about that? We don't laugh enough in this league. Life's supposed to be fun, isn't it?"

[/gets body-slammed by Jim Harbaugh]

29. Chan Gailey — 20 years ago, he'd have made things miiiiiiighty interesting. Today? It says a lot about the last three guys that finished behind Gailey, the NFL coach most likely to be wearing diapers RIGHT NOW.

28. Jim Caldwell — On the one hand, he appears numb to any real emotion, so he might not feel any pain in a death battle. On the other hand, he seems like the type of guy who'd forget he's supposed to throw a punch, and just stare blankly as the anarchy unfolds before him.

27. Gary Kubiak — He'd be in the back of the pack, playing with a lighter, looking cool, surveying the scene. Then, as other coaches knocked each other out and it looks like Kubiak may actually have a chance by default, he'd accidentally set himself on fire.

25. Pat Shurmur — Just seems like the type of guy who gets blindsided in a death match. 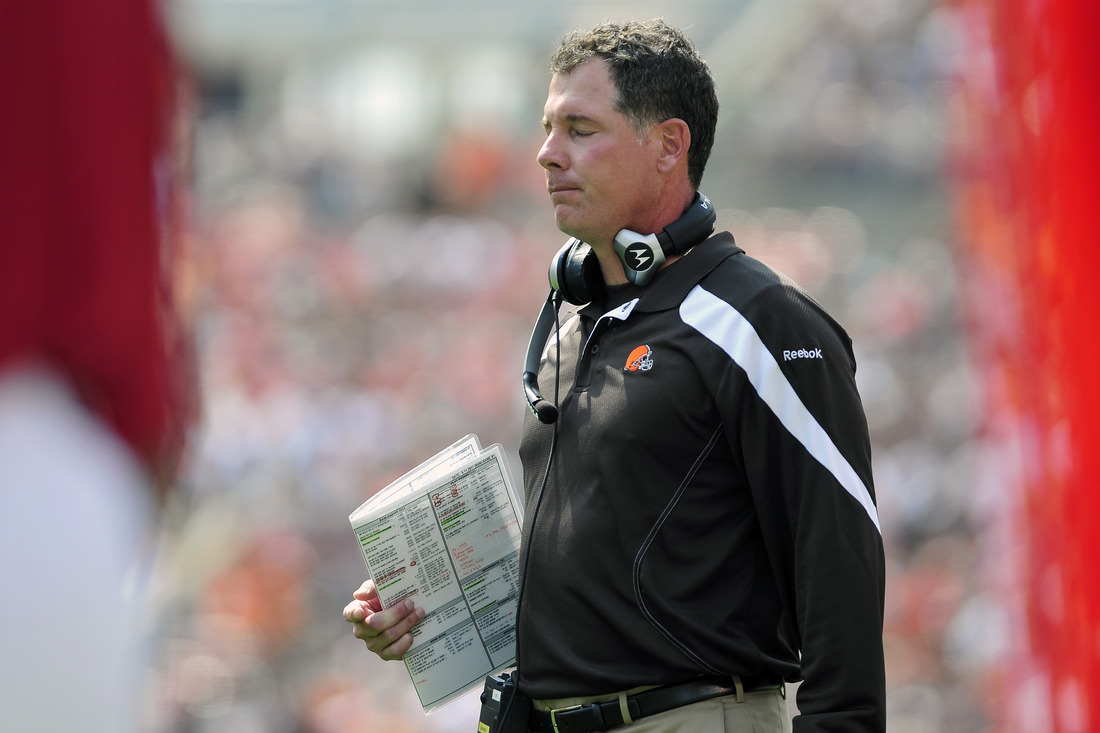 24. Mike Shanahan — Too smart to go down in the first round. Too old and feeble to keep things going much longer than that. Whatever happens, though, it'll be Albert Haynesworth's fault.

23. Todd Haley — He'd be much higher if everyone didn't hate him so much. In a deathmatch, it seems like about 15 different people would seek out Haley before anyone else.

22. Marvin Lewis  — He'd be lower on the list if not for the supernatural capacity for survival he's displayed in Cincinnati the past five years. If Mike Brown were judging a Marvin Lewis boxing match, the count would go to 200, Marvin Lewis would somehow stagger upright at 199, and then we'd go another 16 rounds before doing it all over again.

21. Mike McCarthy — Too doughy, too complacent.

20. Lovie Smith — Could definitely get some good shots in, surprise some people, defend himself better than expected... But in the end, Lovie Smith is still Lovie Smith, and nobody in the NFL is scared of Lovie Smith.

19. Hue Jackson — Reminds me of Grimace, and... Would you bet on Grimace in a deathmatch? 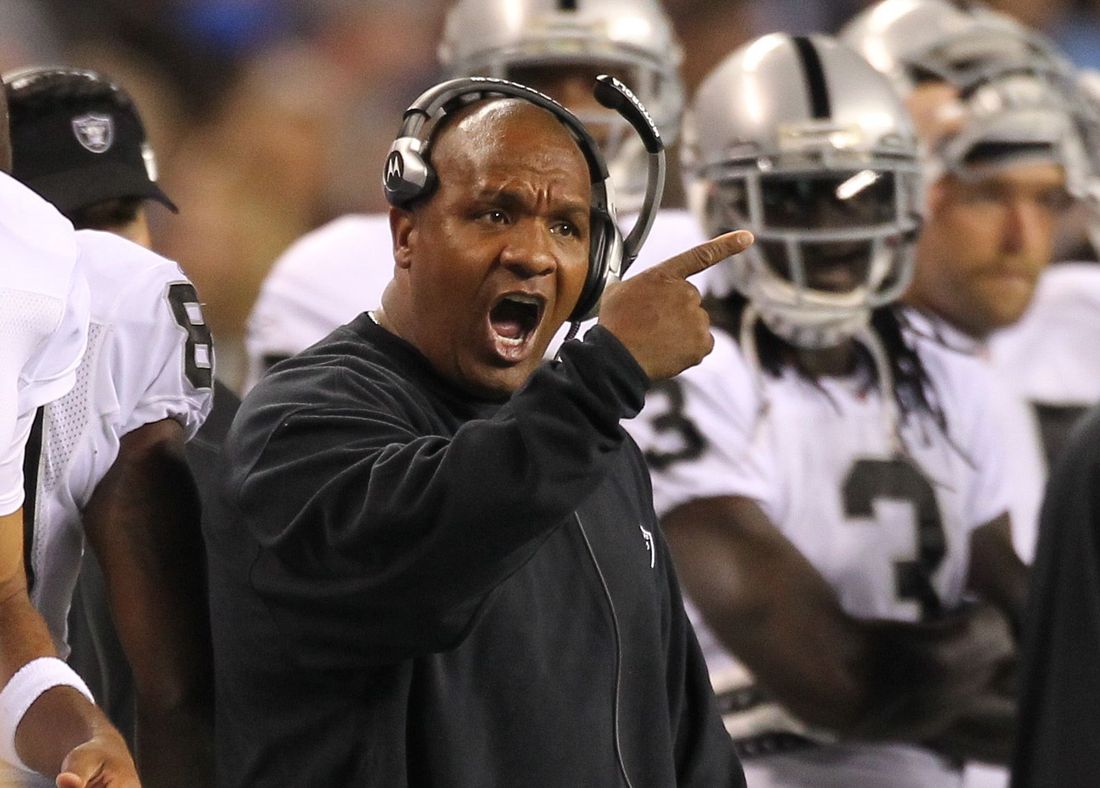 18. Tony Sparano — Seems like he's got some wiry strength, and coupled with the repressed rage he's working with after coaching the Dolphins the past two years, Sparano could surprise some people.

17. Ron Rivera — Former linebacker, anonymous enough so that the deathmatch might last four or five hours before anyone even realizes he's finally a head coach and decides to go after him.

16. Ken Whisenhunt  — Ooo... Former journeyman blocking tight end--that's three different synonyms for blue collar, people. If he had Todd Haley's demeanor, he might be top five on this list.

15. John Fox — Seems like the type of guy who'd go overlooked in a deathmatch. He's an aggressive, defensive-minded coach, who would go for the jugular before anyone even remembered who he coaches for.

14.Tom Coughlin — Ah, one of the biggest sleepers of all! Coughlin may be old and gray (and red), but there's no coach in the league more likely to have inexplicable "old man strength" working in his favor. He also seems like the type of guy who would set you on fire, staring blankly as you burn. Remember what happened to Matt Dodge last year? 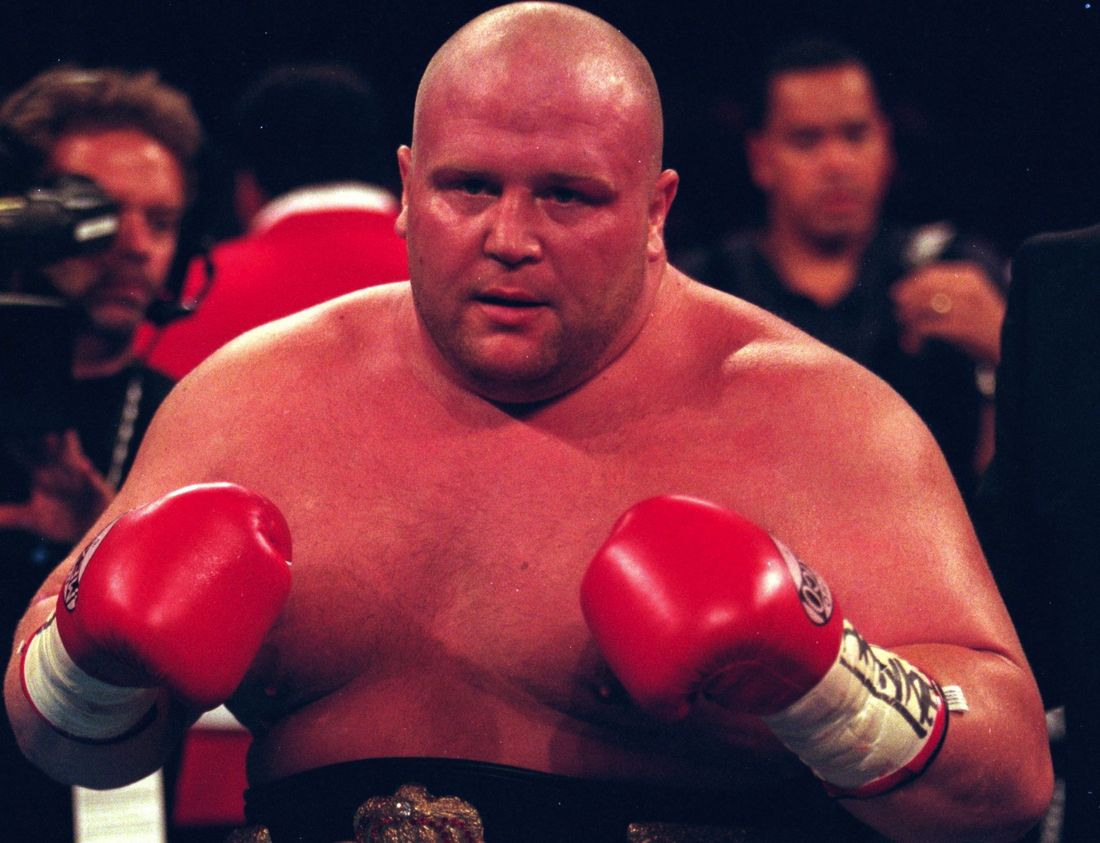 You guys seriously want to bet against the NFL's Butterbean?

12. Mike Smith — PROS: Once tried to pick a fight with an NFL player. CONS: That player was DeAngelo Hall, which means automatic 85 percent deduction on any degree of difficulty rating.

10. Sean Payton — I don't know, this Sports Illustrated article just makes Sean Payton sound like Sun Tzu or something. He's in the top ten just because he scares the crap outta me.

8. Mike Munchak — Former Hall-of-Fame lineman with zero head coaching experience prior to this season. In a battle of fatcat generals, beware of the guy who's lived his whole life as a soldier.

6.  John Harbaugh, Jim Harbaugh (tie) — How can you choose between the Klitchsko brothers? Especially since, if push comes to shove comes to league-wide death match, Jim Schwartz kicks both their asses.

5. Jim Schwartz — Scrappy, angry, and friends with Kyle Vanden Bosch and Ndamukong Suh. I know there are no tag teams in death matches, but Ndamukong plays by his own rules.

4. Raheem Morris — The youngest of any coaches in the death match, and someone who's clearly used to small man's syndrome to propel him to the top faster than anyone could've imagined. He also called his team the best in the NFC at the beginning of last year, proving that he might actually be insane. If the whole NFL wants to knuckle up, Raheem's not backing down from anyone.

3. Mike Tomlin — Could kill more than half this list just by staring at them.

2. Jack Del Rio — Nothin' scarier than the guy with nothin' to lose, but that goes double if said guy once earned the nickname "Jack The Axe" when he brought an axe and tree stump into an NFL locker room to prove a point to his team. That motherf—er will crack some heads. 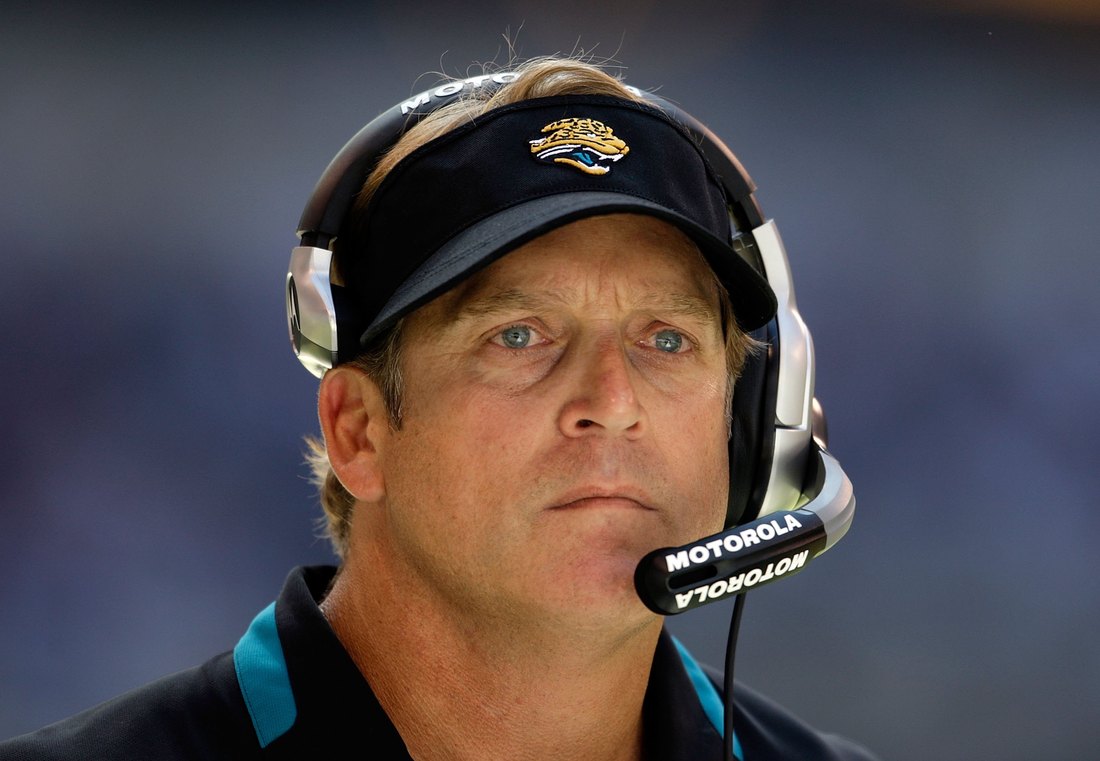 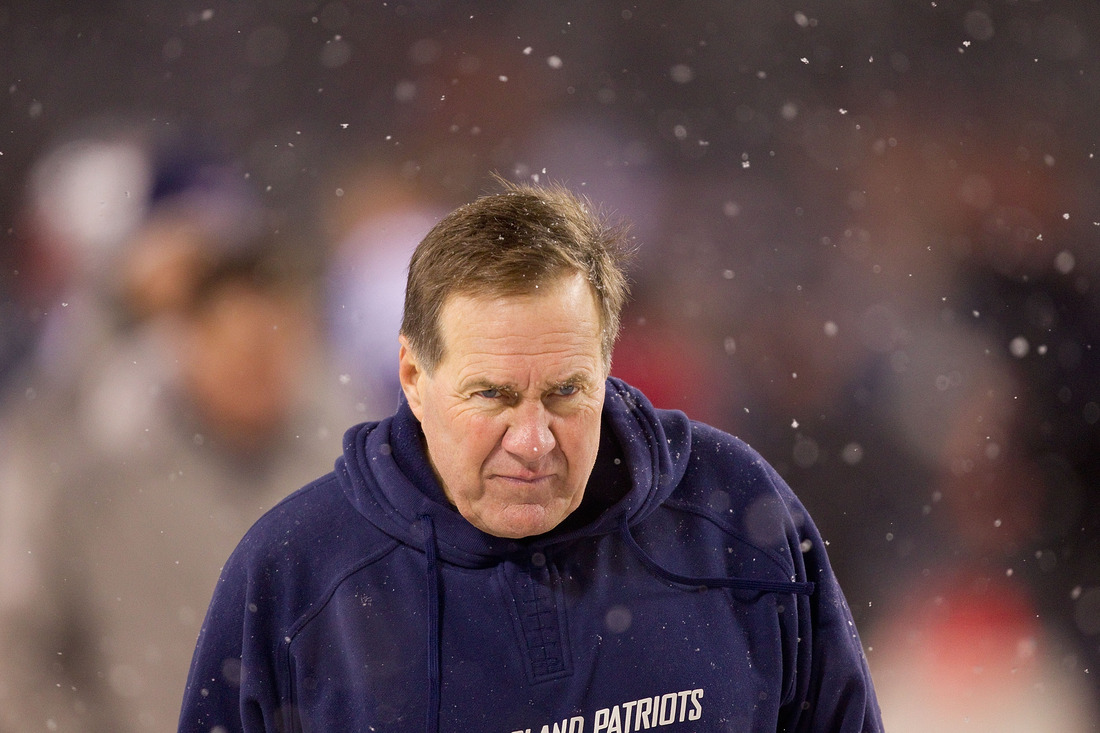 (all photos via Getty Images)