Note: Hootie Would Like To Apologize For Doubting Cam Newton In The NFL

Share All sharing options for: Note: Hootie Would Like To Apologize For Doubting Cam Newton In The NFL

You know how there's that moment for any star when he gets a reality check and realizes he's finally hit the big time?

Well, from the Charlotte Observer:

Darius Rucker, the familiar voice of Hootie and the Blowfish and now a country music star, is a serious football fan. And he is apologizing to Panthers quarterback Cam Newton. 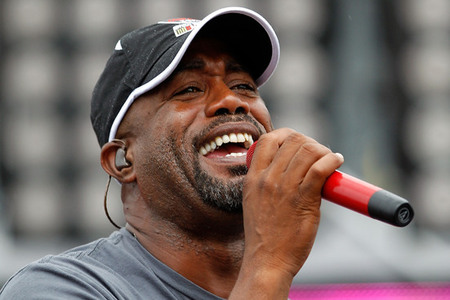 It's a HOOTIE MEA CULPA, y'all.

"I was a hater. I'll never forget his first (regular-season) game. I told a buddy that Cam is going to get blown up. I would like to apologize to Cam Newton. I was dead wrong.

He's a helluva player. His football IQ is off the charts. I love his body language. I love the way he walks down the field. You know he's a leader. Every day I'm becoming more and more of a Cam Newton fan. If you'd told last year I'd be saying that, I'd have said you're crazy."

Cam Newton has won a national title, won a Heisman Trophy, he's been the number one pick in the NFL draft, set rookie passing records. Just last week, he did the Deion Sanders dance in front of Deion Sanders, and he's the runaway favorite to win NFL rookie of the year. But it just didn't feel complete till Hootie got on board the bandwagon.

And NOW he's officially made it.