Tim Tebow Is An American Institution

Tim Tebow looked awful against the Dolphins on Sunday, but just as everyone was writing the punch lines to a new round of Tebow jokes, the Broncos pulled off a miracle, and we were right back where we started. So which part of the story is true?

Share All sharing options for: Tim Tebow Is An American Institution

Ahhhh, yes. Another Sunday passed, another polarizing Tim Tebow performance. But after Sunday in Miami and maybe the most quintessential Tebow performance of all time, I got caught watching one of those Chrysler commercials about Detroit. They just look so cool. Except it's all kinda hilarious, because let's face it, we're talking about Detroit.

Detroit really does embody a lot of what made this country great at one point, but we're also talking about a pretty deafening reminder of what's gone wrong since. Window dressing from Ndamukong Suh and an awesome Scarface beat doesn't mean the emperor's actually wearing clothes.

Download The New (And Much Improved!) SB Nation iPhone App

And when you think about it, what can be said about Tim Tebow that hasn't already been said about the city of Detroit? On the one hand, you have blight and decay and dysfunction that sorta smacks you in the face. On the other hand, Detroit's a fightin' town with character that won't ever quit, with enough hard work and gritty grittiness to blind you to it all. And for a second, you might even forget about Kwame Kilpatrick.

Sunday, the Broncos game showed us both sides of the metaphor. The first 150 minutes were like a documentary about Detroit's decline, and the final forty-five minutes were like one of those Chrysler commercials happening in real life. It was exactly what the Tebow War really needed; more ammunition for both sides. Nothing that happened Sunday changes anyone's mind.

And with Sunday's NFL schedule full of forgettable games, I found myself watching more of the Dolphins-Broncos game than I ever planned. That was all about Tebow, of course.

At first because the sheer spectacle of his failure was enough to leave you speechless, then because the comeback he led took everyone's breath away all over again. It was a wild ride, and I took notes and quotes throughout, so let's relive it in two parts. First....

— On the first play of the game, Tebow handed off to Willis McGahee. On the second? As Solomon Wilcots breaks down the replay of Tebow's first pass: "Tim Tebow... Look, he panics. That ball should be intercepted and returned for a touchdown."

— A little later, with Denver on Miami's 27-yardline, Tebow drops back to pass, tries to scramble, takes a sack that backs the Broncos up another five yards and turns into a 49-yard missed field goal.

— As the first half winds down, we start to see signs of life from the Broncos when Tebow escapes a 10-yard sack and then scrambles 21 yards on a 2nd and 20, single-handedly resuscitating a drive that looked D.O.A. "THIS is why they're playing Tim Tebow," I write sarcastically.

The next three plays: Tebow sacked, Tebow four-yard run, Tebow sacked and fumbles. Denver recovers, but it's fourth and 20. THAT is what happens when you play Tim Tebow.

— The first half ends with no third-down conversions for either team.

— First play of the second half. Kevin Harlan: "Tebow going deep, and looking for... Demariyus Thomas?" Solomon Wilcots: "That ball wasn't even close." My note to myself: "This is painful."

—  Wilcots again: "If the Denver Broncos are going to have any success on offense ... it's going to have to be with running the ball ... Sooner or later, the quarterback has to make some plays."

— A few plays later: "They're just daring Tim Tebow to throw the ball."

— Harlan: "At this point they've got more punts than passing yards." #Yikes.

— Harlan: "Third and 11 for Tebow, here comes the blitz, there goes the ball, annnnd ... incomplete, intended for Royal. ... they gotta punt. Tebow has missed his last six consecutive passes."

Wilcots interrupts him: "But give Tim Tebow an A for effort..."

— Wilcots, a little later: "You have 13 days to prepare, you're coming off the bye week, if you're John Fox, you expect you're offense to perform better than this."

— Matt Moore completes a four-yard pass to Davone Bess to give the Dolphins the game's first third-down conversion. This happens with five minutes left in the third quarter.

— Time winds down in the third. Camera pans to Tebow and Wilcots tells us, "The fourth quarter has been HIS quarter."

— [Tebow throws 20 yards downfield and five yards out of bounds] Harlan: "Tebow sails... Oh he had an open receiver, Fells at the 50!"

Wilcots: "He missed him so badly you wonder if he was throwing it away. [camera pans to John Fox] Even John Fox said, 'What are we doin there?'"

— Later: "This one sails waaaaaay over him. This wasn't even close."

— Finally, with time winding down in the fourth, Wilcots: "[The Dolphins have] given up some big plays defensively. In fact they come into today's game allowing the most yards per pass attempt of any defense in the National Football League. And yet and still, Tim Tebow, even when receivers do get open, not able to take advantage of it. You'd expect that if there were any secondary you could make big plays against, this would be one of them." FAMOUS LAST WORDS, SOLOMON.

— Tebow completes passes to Demaryius Thomas for 15 yards, Knowshon Moreno for 9 yards, and then Matt Willis for a 42-yard catch and run. Tebow adds a scramble and a 5-yard touchdown pass to bring the Broncos within one score. Wilcots: "Now THIS is the magic we've been waiting to see from Tim Tebow."

— Cue the onside kick. Harlan: "Denver thinks they've got it and they DO. A successful onsides kick which sets the table for Tebow!"

— Everyone is drunk now. Wilcots: "And it's Tim Tebow time. You love his resilience. Because let's face it, before that previous drive, it hadn't been pretty. But he is a magical player."

— Wilcots uses the term 'magic' to describe Tebow throughout the ensuing few minutes. Sadly, he stops just short of channeling Charlie Sheen with a "He's got magic in his fingertips!" line.

— The Broncos are driving again. Tebow threads a pass thirty yards down the middle of the field. "Annnnnd... what a catch! What a catch by the tight end Fells!" First and goal at the three.

— "Clutch moment in the ballgame for Tim Tebow."

— Tight end screen on the backside. "It's a touchdown!"

— Harlan: "Tebow's resume before these last two series? 11 possessions, eight punts, one fumble, two missed field goals." Time to line-up for the two-point conversion and the tie. The Broncos run the most predictable QB draw in the history of the NFL. "Tebow... THEY GOT IT."

— A little tipsiness just became a full-on blackout. Wilcots: "Tim Tebow doesn't disappoint. The numbers do not look good, but at the end of the day, and we talked about it, we were not going to judge him on all the statistical data. We were gonna judge him on effect. On the outcome. ... Somehow he pulls it together, Kevin. Making magical plays."

— D.J. Williams sacks Matt Moore and Moore fumbles, giving the Broncos the ball at the Dolphins' 36 yardline. John Fox decides to keep the ball in his running back's hands, willing to take his chances playing for a 51-yard field goal. And the kick... "Heeee GOT IT. DENVER AND TEBOW HAVE WON."

— "If you would've written this script, you wouldn't have believed it! ... On the same field where Tebow won a high school state title, a college national championship, in his first start this year, the fourth of his career, he wins... in this stadium."

Tim Tebow is a winner because all Tim Tebow does is win. 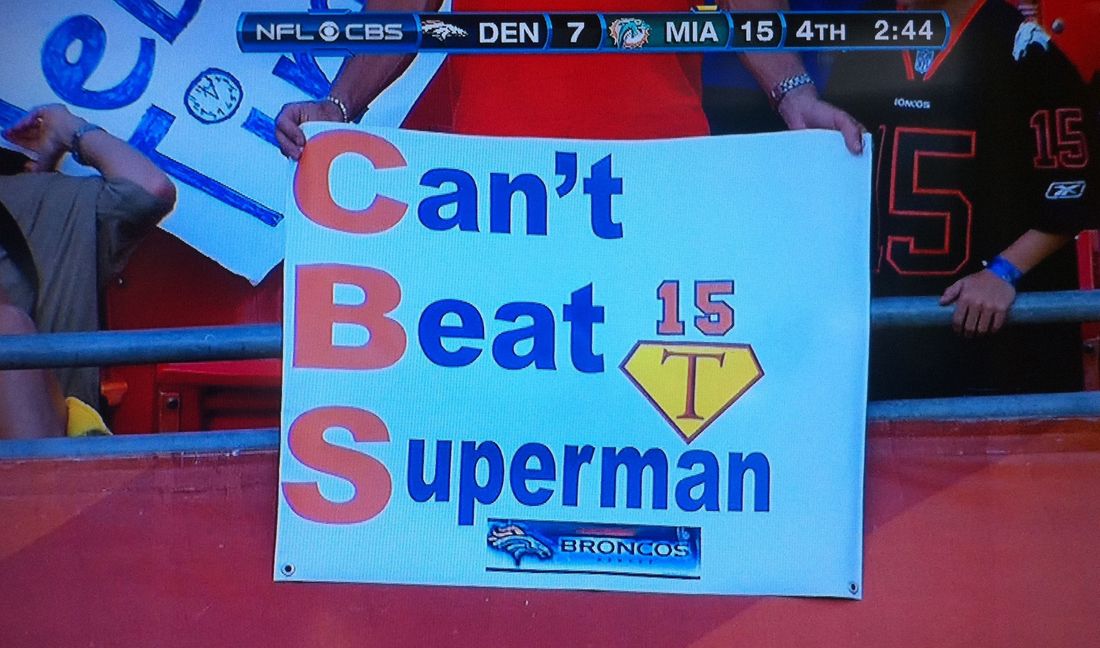 Now, it would be easy to sit here and double down on Tebow skepticism. All he does is win, you say? Well if Tony Sparano and the Dolphins hadn't stupidly gone for two on their fourth quarter touchdown, then the Broncos never would have had a chance. Not to mention the onside kick that saved Denver and the forced fumble that ultimately killed Miami.

But that's not the point. Because as much help as Tebow got, what he did in the final three minutes on Sunday was still pretty incredible, and for all his flaws, he really does seem to get better in the final minutes. Part of that's the scheme that Denver runs in the last few minutes, but not all of it. On some level, you gotta admit that Tebow's intangibles are real. His team loves him, he truly never stops believing in himself, and (ahem) he's a fighter.

And he's fun to watch. Whether you root against him or not, chances are he'll give you something to yell about one way or the other. Absent any compelling alternatives—like fans watching Sunday's 1 o'clock games--rolling the dice with The Tebow Experience isn't such a bad option. And maybe that's a metaphor for his whole career in Denver so far.

But if anyone wants to seriously debate Tebow's place in the NFL, then we go back to where we started. Depending on what you're looking for, there are snapshots of Detroit where it looks worse than ever, and snapshots where the cliches in those Chrysler commercials seem real. But even if the latter ideal is as real as the former, that doesn't change the basic truth of it all. All things considered, it's still kind of crappy, isn't it?