Monday Night Football only gets stinkers like tonight's Ravens-Jaguars futility-off every so often, so it's important to cherish every bit of misery Jon Gruden must "THIS GUY" through as dearly as possible. Joe Flacco completing a pass to himself would fall squarely into that category.

Flacco throws a pass that Jeremy Mincey bats right back into his hands, and then, smartly realizing that he cannot throw the ball again, scampers to the outside ... where he is easily taken down by another Jaguars defender.

The pass went for a loss of eight yards, and dropped Flacco's passing yardage on the night to a measly two yards. That's right: Flacco has thrown 12 passes, completing five, for a grand total of two yards. He is averaging a sixth of a yard — six inches — per attempt.

That led to fourth and 43, which looks like this. 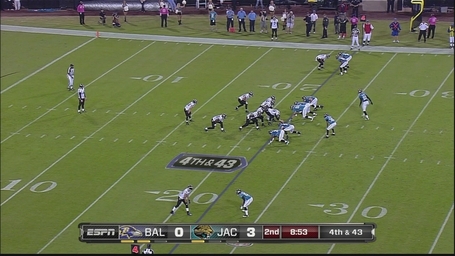 To make matters worse for the Ravens, a Baltimore penalty set up the Jaguars up in Ravens territory, and Jacksonville turned it into a field goal that extended its lead to 6-0.

Neither team has a third down conversion in this game. Baltimore doesn't even have a first down. Save yourselves.