Share All sharing options for: VIDEO: Jon Stewart And The Daily Show On Hank Williams Jr. 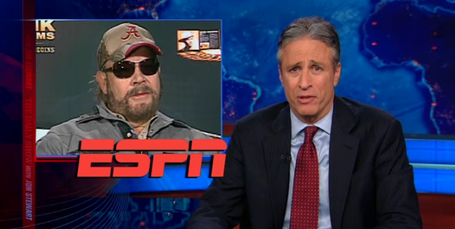 Democrat or republican, we can all agree that nothing's more absurd than the 24/7 cable news cycle. So in that spirit, we present Tuesday night's Daily Show segment, where Jon Stewart manages to skewer two of the biggest names in the cable biz--first, Fox News, and then ESPN.

And of course it all comes back to Hank Williams Jr. and that pesky little golf analogy.

Video after the jump.

In case you forgot, this all started when Hank Williams, Jr. was asked about Barack Obama and John Boehner playing golf, and responded with this:

"That turned a lot of people off. You know, watching, you know, it just didn't go over." He then stated, "It would be like Hitler playing golf with Netanyahu, okay?"

Then ESPN pulled his opening from Monday Night Football. But as Stewart asks, "ESPN, you're shocked at Bocephus' comments? You know, he's been at ESPN for 20 years. Have you met him? ... This is Bocephus, man! He's got a song about how things would be better if the south had won."