Share All sharing options for: Maurice Jones-Drew, Sidney Rice, And The 'Shiva Bowl Shuffle' On FX 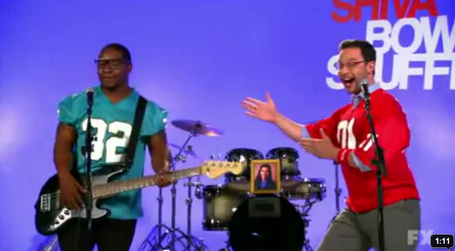 Thursday night, though, they sorta outdid themselves.

The "Shiva Bowl", in case you're wondering, is The League's championship game, named after an ex-girlfriend of one of the players, who broke up with him because of fantasy football.

[Maurice Jones-Drew]
I'm MJD, Ruxin's first pick in the draft,
he went with me, and we kicked allllll your ass,

[Sidney Rice]
I'm Sidney Rice, I'm hip to the I-R,
but we're rushin the Shiva with my late-season charge

Can't tell whether it's a high point or a low point in our collective fantasy football obsession, but: Yep, this really exists. And you gotta admit, it's pretty fantastic that they convinced Sidney Rice to say, "I'm Sidney Rice, and I'm hip to the I-R." TV is the best sometimes.