The weekend has been an emotional rollercoaster for the Oakland Raiders, beginning with Al Davis' passing on Saturday and ending with a wild win over the Houston Texans on Sunday. Understandably, the Raiders and their fans let it all out after Matt Schaub tossed an interception in the end zone, allowing Oakland to secure a 25-20 win. Can't help but be happy for the Raiders, their start to the season and Sunday's win.

It's hard not to get choked up looking at this photo of Hue Jackson, overcome with emotion after the Raiders' win. 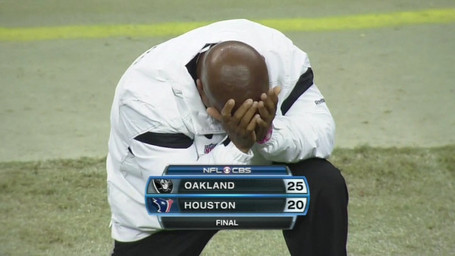