Endurance Football, Or, Football Played On A Mile-Long Field

A mile-long football field, filled with hills, streams, barns, and bridges. A game that lasts two weeks. Negotiations to make the next touchdown worth double points. It's all part of "endurance football," a proposed variation of the game.

Share All sharing options for: Endurance Football, Or, Football Played On A Mile-Long Field

You know what really gets my goat about wars? People die in them and they are the worst thing about humanity. That really just gives me the bumblebees, everyone. However: the tactics and strategies employed in wars -- in particular, 19th- and 20th-century warfare -- are endlessly fascinating. If you've ever played Age of Empires, or Starcraft, or Rainbow Six, you're probably with me on this.

Certainly, more parallels are drawn from warfare to American football than any other major sport. There are clearly demarcated battle lines, attacking and defending forces, ground and air attacks, and a profound emphasis on specialization: dire circumstances excluded, PFCs don't drive the tank, and offensive linemen don't touch the ball.

Here, I wish to propose that we discard the things we don't like about war (the dying and hurting people part) and apply the interesting things about war (the scope of long-term struggle, tactics, strategy, etc.) more dramatically to football. This isn't meant to be a replacement of, or improvement upon, modern football, which is fine just the way it is. Think of this as a supplement for the curious, eccentric, and idle.

This sport is called "Endurance Football." I had kicked around the general idea for a while, and after speaking with my friend Pete (@sorryeveryone) recently, the general rules of endurance football have taken shape.

First, let's nail down the major components that remain the same: the objective of reaching the end zone remains the same. The same ball is used. There is a line of scrimmage, there is a snap, there are 10 yards required to achieve a first down, and there are referees.

These are the differences.

The field is one mile long; in other words, 1,760 yards. In terms of width, though, the field doesn't maintain the same proportions, as it's only 150 yards wide. So, while the field is 17.6 times longer, it's only three times wider.

Since a standard football field is referred to as a gridiron, this field of play may be colloquially known as a "smokehouse."

The major justifications for the field's length:a) we want this game to last quite a long time, and b) big plays now become HUGE PLAYS.

Think of these fields as golf courses, each different in terrain and geographical features. Indeed, some may simply be giant, flat, mowed lawns. Others, though, feature hills. Trees. Bodies of water. Bridges. Before play, the field must be searched, and divots, rocks, and other major hazards must be removed or remedied, but once the game is in play, it's up to the teams to decide how to leverage these features.

Do you sense that the opposing defense is more fatigued than your offense? Perhaps, in order to exhaust them, you begin driving up the hill instead of remaining in the valley. Is the opposing offense knocking you around? Force them to slow down by stationing most of your men at the bridge, thereby securing a major choke point, and see if they're gutsy enough to try to splash their way directly through the stream.

THE CLOCK, AND PACE OF PLAY

The game is over after precisely two weeks (though longer variations could certainly be considered), and lasts from sun-up to sundown (as determined by the officials) each day. The play clock is set at 30 minutes.

Of course, there's no stopping an offense from snapping the ball every 20 seconds, like an NFL team with a hurry-up offense would. This strategy would be useful if you're trying to catch your opponent off-guard, rattle them, or simply wear them out.

By default, there are five downs, not four.

There is no opening kickoff; instead, a coin flip decides which goal is defended by each team and who receives the ball first, and the ball is placed at midfield (the 880-yard line).

Punts as we know them do not exist in endurance football, because the size of the field would render conventional punting rather useless. Rather, punts are allowed, but every punt is a live ball -- in other words, a team can recover its own punt. This could be utilized as a high-risk, high-reward play, or simply as a last-ditch measure. At any time, any eligible ball carrier behind the line of scrimmage can pull up and boot the ball over the opponents' heads, which results in a mad dash for the ball.

If the game is tied after a two-week duration, a system somewhat similar to college overtime rules is instituted. The ball is placed at midfield and Team A drives for a score. If unsuccessful, the line of scrimmage is set back to midfield and Team B receives possession. An overtime game ends when one team has the lead with the same number of overtime possessions as the other team.

The most radical difference here is that when the offense is off-duty, it's still on the field, and may be called into action. Here's how that works. 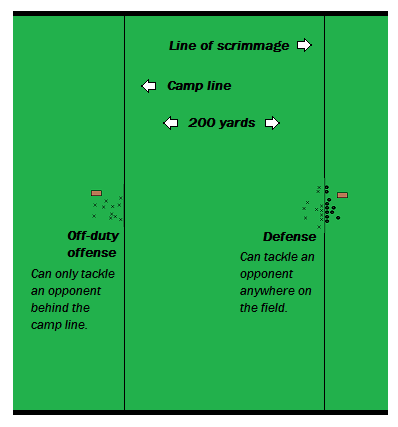 If an offensive ball carrier manages to beat everyone on the defense, he has practically already won himself a 200-yard play. But after 200 yards, he passes the "camp line," after which the team's off-duty offense is permitted to tackle him.

Generally, this off-duty offense spends most of its time hanging out, eating, reading, discussing strategy, what have you, but it must be ready for a moment's notice. If they are unprepared to fan out and make a tackle in time, the ball carrier has a long, long run ahead of him.

If a player is injured or otherwise unable to play, he can be substituted for a backup on the sidelines, but off-field personnel cannot be subbed in mid-day for any other reason. In fact, barring this exception, players are only eligible to play if they have camped out on the field the night before.

Yes, camped out. This is endurance football! At sundown, the players retreat to their camp lines, set up tents, and start a fire. Each team is allowed a supply wagon, from which they can have a few beers, grill some steaks, etc. Some of these games are played in rough weather, and sometimes, these camping trips will not be fun.

Unlike conventional football, the two sides are permitted to make deals. Some examples of deals that teams could make with each other:

The following sorts of deals are not permitted:

If teams agree to a deal, they must register it with the officials. If the officials find it permissible, they will enforce the conditions of the deal.

In some games of endurance football, a "rogue agent" may be instituted. This player belongs to neither team, playing only for himself.

At the beginning of each play, he can set up anywhere behind the line of scrimmage. His objective is to gain possession of the ball -- whether by interception, fumble recovery, or punt recovery -- and then run with the ball to either sideline. If he does so successfully without being tackled, he will be guaranteed a roster spot in an upcoming endurance football game. This is the primary means by which players enter the league.

There are a few major caveats: first, the rogue agent is not allowed to tackle anyone, nor can he interfere with the progress of any other player. Second, he is only permitted to carry the ball one time. If he gains possession of the ball and is tackled by either side, he must leave the match permanently.

Both teams are incentivized to tackle a rogue agent with the ball -- if they do, they are allowed a higher position when rogue agents are drafted by teams later in the season.

These are the general rules of endurance football, which, if nothing else, might make for a freaking awesome video game. Without seeing a game actually play out, it's difficult to tell whether any of these rules are ill-advised or will result in undesired consequences.

Suggestions of all sorts, of course, are welcome.